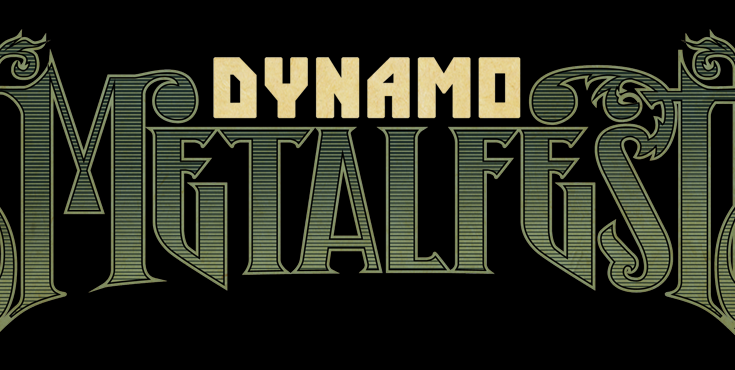 On the 14th of July it is time for the next edition of Dynamo Open Air festival. While last edition was sold out completely, this year it is not going that fast. Of course last year was an excellent line-up (for our report go here)! Not that this year the line-up is not good, there is just a lot of big competition these days. Nevertheless for the price they are asking it is still a very heavy and strong line-up. This year’s edition presents some classic bands mixed with some progressive ones and current popular ones. Let’s check out what it is all about.

First up is the Belgian post hardcoreband Elephant who won the Metal Battle, honestly, never heard of this band, if you come early it’s maybe a chance to get them known. Iron Reagan, who replaces Havok, will bring us some groovy crossover shit which will turn the fields in no time to a circle pit . I Am Morbid, which was formed around Former Morbid Angel frontman/bassist David Vincent and drummer Tim Yeung who will be  playing the best songs from their legendary albums ‘Altars of Madness’ (1989), ‘Blessed Are The Sick’ (1991) and ‘Covenant’ (1993), a must see for the death metal fans , The progressive metal band Leprous from Norway is a rising star in the of progressive metal genre. These Norwegians never repeat themselves and this is certainly true for latest studio album “Malina“. Get ready for a varied set from this band! Annihilator and Overkill will bring you some classic 80’s thrash. These veteran bands are still rolling hard, making high quality thrash that outplays a lot of younger thrash bands these days. 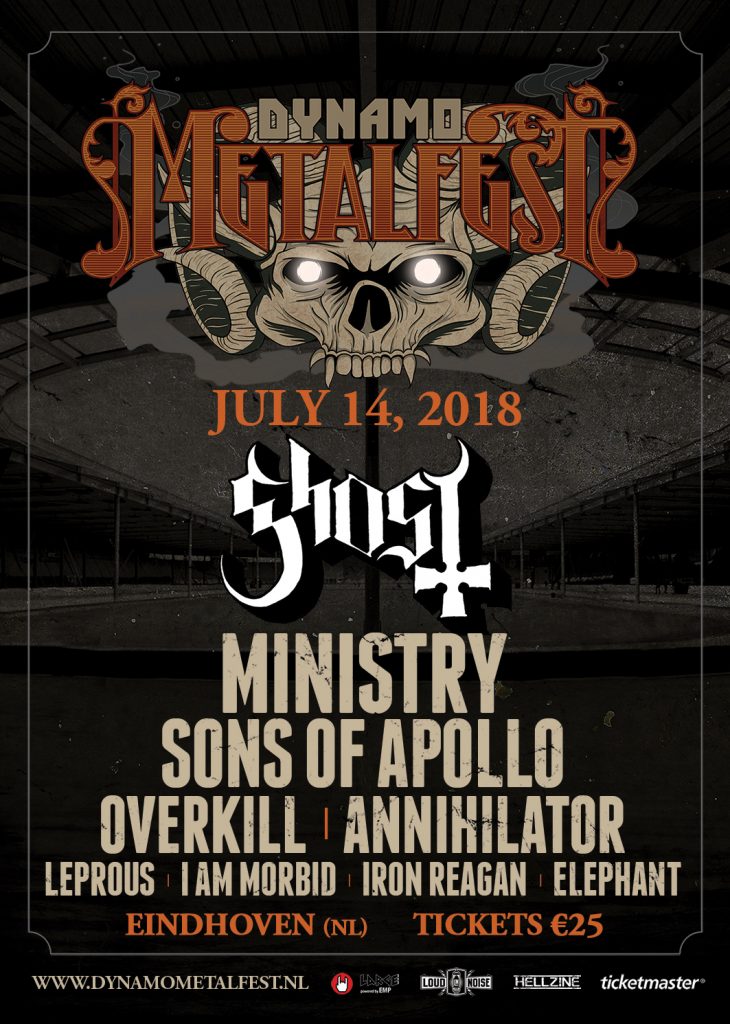 Sons Of Apollo is the progressive metal band that consists of top notch musicians such as Mike Portnoy (ex-Dream Theater), Derek Sherinian (ex-Dream Theater), Jeff Scott Soto (ex-Journey, ex-Yngwie Malmsteen, Trans-Siberian Orchestra), Billy Sheehan (Mr Big, ex-David Lee Roth) en Ron “Bumblefoot” Thal (ex-Guns N’ Roses). The debut album Psychotic Symphony has just been released and it sounds great, so we are looking forward to see how these guys will do at Dynamo Metal Fest 2018. Another oldie, Ministry, will bring us some industrial metal. Al Jourgenson is known for being one of the pioneers of the Industrial Metal/Rock genre. With his new one AMERIKKKANT which rebels against the current politic situation in America, he will be bring us some very heavy songs. The headliner this year is the Swedish band Ghost. The band members of Ghost mimic the Roman Catholic Church but have reversed the image to worship Satan instead of the Holy Trinity. Recently the band ‘parted’ with all incarnations of Papa Emeritus to be replaced by Cardinal Copia, who from now on will lead the heavy metal mass.

‘How much will that cost me ?

Believe it or not, all these bands together for 25 € !!! It is 5€ more than last year, still a steal isn’t it !! Normally you would pay this or more for each band separately. Of course there are some added service costs (3,5 €). Let’s be honest, for this price, these bands, you must be joking. Buy a ticket here.

How to get to this party ?

The festival takes place at Ijssportcentrum in Eindhoven (also known as Kunstijsbaan ) at the Antoon Coolen laan in the south of Eindhoven. Look here for a map of the Kunstijsbaan. As there is a parking in the neighbourhood you can go with the car but it’s not recommended as it is expected there will be a lot of people. You can come also by train and take the normal bus (lines 171,172 or 7) to the Ijssportbaan or you take for 4 € (retour ticket) the special busses that drive from the station to the festival site.

Drinks cost 2,75 € and are paid with tokens which you can buy on the festival site , there are also a lot of possibilities to eat with enough alternatives for our vegan friends, some interesting BBQ and food truck stuff to be found… Dynamo Metal Fest uses a deposit money system for the drink cups. A system that should be quite familiar to people who went to certain festivals in other countries like Rock Hard, Wacken Open Air or Tuska Open Air. When you get your drink you pay 2 coins: 1 for the drink and 1 for the cup. Don’t throw away the cup ’cause with every new drink you get, you hand in the cup together with 1 coin for the new drink. At the end of the festival you can exchange your cup for a coin (or a soft cup of booze) and the coins you still have in your pockets for money, hopefully they will have more registers open to exchange than last year, this resulted in quite a long queue and a lot of frustration to the festival visitors.

The festival itself opens at 11 am. The time schedule isn’t available yet , we will inform you when they make it available !!!

Buy your ticket here to join this hell of a party. If you need more information on it you can always visit the website Dynamo Metalfest 2018.
Or if you simply need more convincing still, check out the after movie from last year edition.