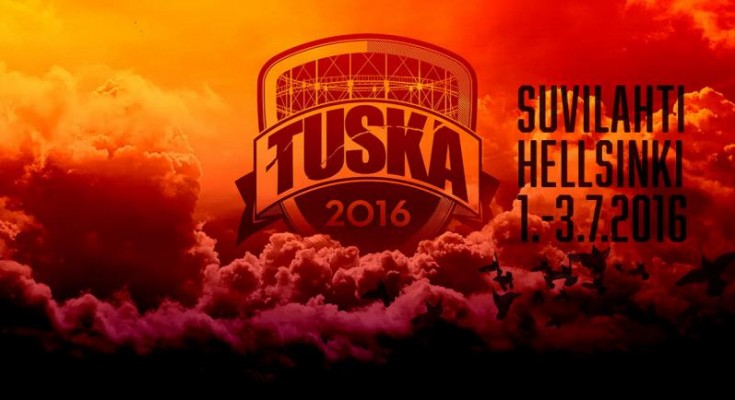 Metalheads all over the world see Wacken Open Air as the Mecca for metal, so they should try to at least once visit and experience that festival in their mortal life. But personally I think we should add another of these life goals as a metal fan to the list. If you think metal, there’s a good chance you think of Finland or a band that comes from the land of 1000 lakes. A recent calculation made by Jakub Marian even shows that Finland has the most amount of metal bands per capita in Europe (and even if you’d look worldwide). So what could be better than going to a metal and hard rock festival in Finland as it’s the birthplace of so many great bands? There are quite a few festivals throughout the year, but the best one to pick would be Tuska Open Air: the biggest metal and hard rock festival of Finland, held every year at the start of summer in the capital city Helsinki.

For this year’s edition they seem to have gone for bands as headliners that wouldn’t necessarily be put on the main stage as the closing band on other festivals. But this means that we should get a different show from them on Tuska than on most festivals due to the extra playtime of headlining. On Friday Tobias Sammet‘s Avantasia will close the day with an impressive list of guest singers in his trail: besides Tobias Sammet (Edguy) himself, there’s Eric Martin (Mr. Big), Michael Kiske (ex-Helloween, Unisonic), Bob Catley (Magnum), Jørn Lande (Masterplan) and Ronnie Atkins (Pretty Maids). On Saturday the last band of the day will be Swedish neighbors Ghost of which you can always expect a (un)holy celebration that blows you away. And the band that gets to end the festival completely on Sunday is native Children Of Bodom of who we know they’ll most likely do something special on stage (as last time they headlined on Tuska they basically fried some sausages in their pyro).

And that’s just the headliners! There are many great bands from all over the world like thrash legends Testament and Anthrax, death metal band Cattle Decapitation, black metal influenced bands like Kvelertak, Behemoth and Primordial and much much more big names to look forward to and smaller names to discover. A few we would suggest to check out besides the ones just mentioned are Myrkur and Nervosa. But for the whole list, check the image below.

Another thing that might make Tuska pretty damn interesting to visit, is the chance to get to see performances of Finnish household names that are absolutely huge in the scene over there but almost never come outside their country. Some gigs I’m looking forward to of those are Stam1na, Turmion Kätilöt and Diablo to name a few. And the fact that I’ll get to see Eurovision winners Lordi performing in their own country gets me pretty excited as well.

As I mentioned earlier, the festival takes place in Helsinki. The place where mayhem strikes down for 3 days is a spot called Suvilahti, which looks promising as the setting for a metal festival since it’s an old power plant turned into an event area. The address closest to the entrance is Parrukatu 2-4 which should be about a 3 km walk from the city center. Since it’s really close to the center and there is no public parking for cars at the festival, the best way to arrive to Tuska is by metro. Helsinki City Transport website. The closest metro stop is Sörnäinen, a several hundred meters from the festival area. Use public transportation to get to Suvilahti: metro to Sörnäinen-station or tram (6, 7A/7B, 8) to “Kurvi” / Vilhovuori. You can also take the bus (68 and many more) from the central railway station. Approach the festival gate from Sörnäisten Rantatie, next to the ABC -gas station.

Besides that there’s the brand new stage and concept of Solmusali Stage where they provide artist and industry power player interviews, panel discussions and a Swallow The Sun acoustic set thrown in the mix for good measure. Solmusali has the capacity of approx. 100 persons and it’s open for all Tuska ticket holders. Tickets for the shows at the Solmusali can’t be reserved, it operates with the ”First Come, First Served”-principle, excluding the Swallow The Sun set, for which the tickets will be raffled for Saturday visitors.

For an in-depth look of the overall timetable and to make your own schedule, click here.

Besides the stages there are merchandise areas, a food garden, bars and even a convenience store. The crazy Finns of Tuska even made place for a sauna on the festival area! For a closer look at the map, click on the picture below. 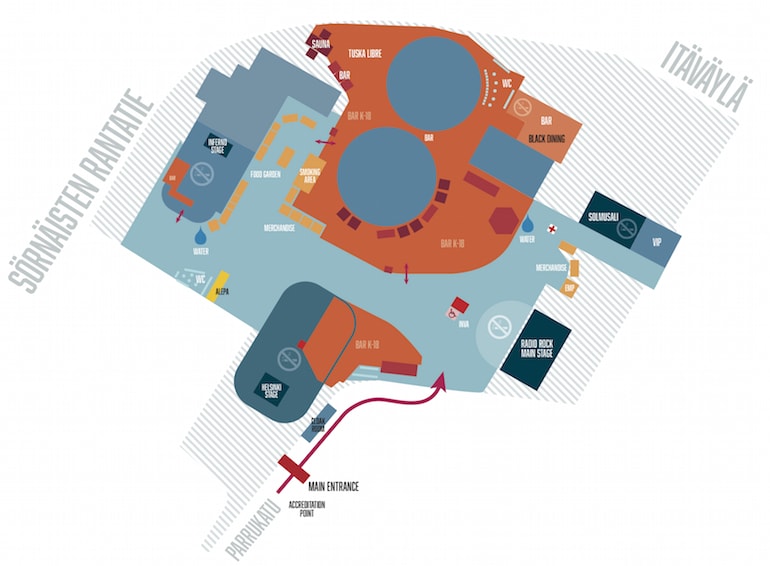 There’s a food garden with a wide variety of food, plenty of bars and a place called “Black Dining”. Also at the convenience store you can find stuff like sandwiches, ice cream,… They use a deposit system to boost the recycling: 1 euro deposit is charged when purchasing a canned drink or a drink in a mug. Deposit is returned when returning an empty, unbroken can/mug to the bar or to the deposit point.

TUSKA 2016 signing sessions will be announced closer to the festival.

Since the festival day ends pretty early, Tuska has a system of official after parties on several spots in the city center of Helsinki. They’ll take place at either the legendary Virgin Oil Co. venue or Helsinki’s hardest hard rock house Bar Bäkkäri. To get in the mood for a weekend of heavy music they’ve planned an official pre-party called Tuska Heatseeker at Tavastia on Thursday 30th. The pre-party will feature Finnish bands like glammers Santa Cruz, thrashers Lost Society and hard rockers Shiraz Lane.

If you want to get into the mood, check out the official after movie of last year’s edition:

GRIMM Ghent will be represented, hope to see you there!