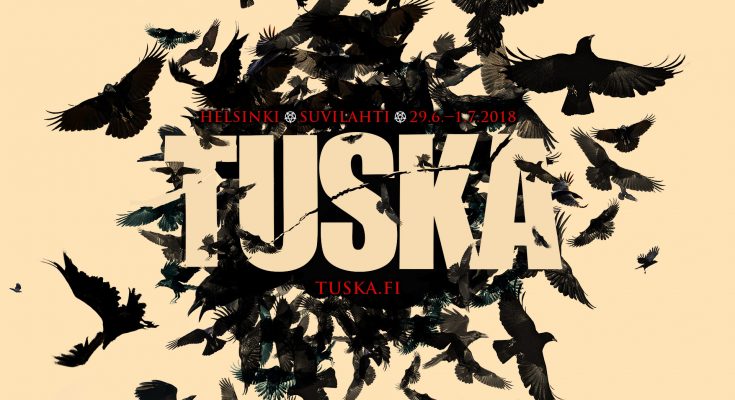 Last year we got to celebrate the 20th anniversary of one of the biggest metal festivals of THE metal country Finland. Metalheads all over the world see Wacken Open Air as the Mecca for metal, so they should try to at least once visit and experience that festival in their mortal life. But personally I think we should add another of these life goals as a metal fan to the list. If you think metal, there’s a good chance you think of Finland or a band that comes from the land of 1000 lakes. There are quite a few festivals throughout the year, but the best one to pick would be Tuska Open Air, held every year at the end of June/in the beginning of July in the capital city Helsinki.

Again they’ve gone for headliners that you won’t necessarily see headlining on the main stage at other big European metal festivals. On Friday Body Count featuring Ice-T will be sharing their anger and rap infused thrash metal with us. The Saturday brings back the progressive groove masters from France, Gojira. And the band that gets to close down the festival on Sunday are Parkway Drive and of what we’ve seen already online, it’s going to be one hell of a show with fire, fireworks and drummers going upside down!

And that’s just the headliners! There are many great bands from all over the world like the black metal legends of Emperor and the solo project of their vocalist Ihsahn, the ever impressive Arch Enemy, mind-blowing Meshuggah and supergroup Dead Cross (with for instance Mike Patton of Faith No More & Dave Lombardo formerly drumming for Slayer). But for the whole list and schedule, check the image below.

Another thing that makes Tuska pretty damn awesome, is the fact that they make sure that about 50% of the bands on the bill are Finnish. You can catch bigger names like Moonsorrow, but also smaller and upcoming names like Shiraz Lane, Blind Channel and Tyrantti.

Besides that there’s the smaller 4th stage and concept of Solmusali Stage where they provide artist and industry power player interviews, panel discussions and some showings of horror and fantasy related short movies. For those that actually plan to sleep a bit during the weekend, there are 2 options they can choose from. Tuska is located in the city so they have no camping area. The closest camping area is RASTILA, by the metro stop of the same name. Affordable accommodation in Helsinki from THIS LINK or via TRIVAGO hotel search. Although the city has plenty of hotels you might want to book your hotel room well in advance as a plenty of Tuska-comers arrive from far away.

Since the festival day ends pretty early, Tuska has a system of an official afterparty in the city center of Helsinki. This year they’ll take place exclusively with live shows at the legendary Virgin Oil Co. venue and DJ sets in On The Rocks. On Friday June 29th you can drown into melodic death metal by Bloodred Hourglass, Whispered and Mors Subita to continue the metal festivities. On Saturday June 30th the highly popular industrial metal outfit Fear of Domination will be destroying the stage with support from brand new Finnish heavy metal band Oceanhoarse and pop punk cover band High School Dropouts. On Sunday July 1st there’s still an after party to close down the whole festival weekend at On The Rocks with shows from Lost Society, Watery and Pahan Ikoni.

To get in the mood for a weekend of heavy music there’s also the second edition of the official pre-party Tuska Heatseeker at one of the oldest still operating rock venues of Europe, Tavastia on Thursday 28th. The pre-party will feature headliner and Finnish modern metal giant Medeia, supported by the Finnish band and Tuska Torstai revelation I Revolt. More bands are still to be announced!

If you want to get into the mood, check out the official after movie of last year’s edition, read our report here and check out our photos here!

Tuska Open Air 2018 takes place from June 29th till July 1st and there are still tickets available, though they are going really fast at the moment. For additional information go to:
facebook.com/TuskaOpenAir
Facebook event page
twitter.com/tuskafestival
instagram.com/tuskafestival