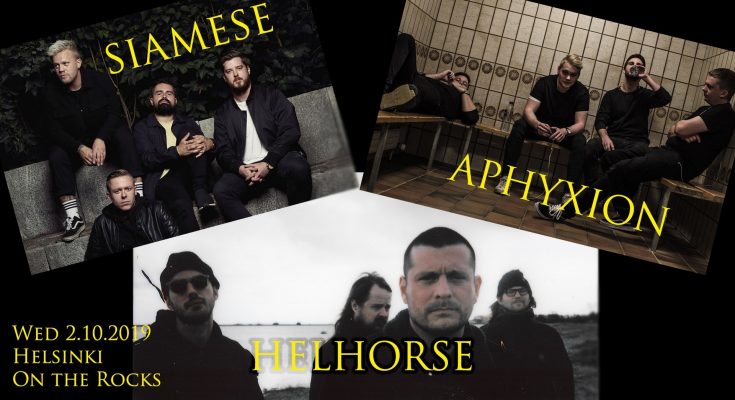 This past summer I came across a little band called Defecto. I actually really appreciated their act and when looking into them more, I discovered that they are part of a collection of Danish bands gathered under the name Prime Collective. That collective is trying to promote quality bands from Denmark outside its country. And then I noticed this event: Prime Time. An evening with 3 bands from Denmark, 3 bands from Prime Collective, showing Finland what the country has to offer.

The band to kick off the night, was Helhorse. Their mix of punk, metal and hard rock delivers a dirty, raunchy and heavy hit of music. Despite the rather small crowd that showed up for the opening band, they did not hold back one bit. From first to last and from start to finish, every single member threw themselves at it as if it was the last time they were playing. Songs ranging from fast ragers to moody blues to sluggishly groovy doom, they cover it all, it all works so well and kicks ass. This is simply a great band that sounds good both live and on CD. Talking about that, they just recently released a new album called ‘Hydra‘, check that shit out!

Next up, something rather different. Siamese is an outfit that brings a nice chunky heaviness, but adding a very funky and catchy pop element to it. Especially the vocals bring a rather soulful touch to the music and the self-branded tag of “r’n’b core” to their music isn’t so far-fetched. They sing about emotions, life and all the tough shit that can happen to you. But despite all the drab topics, they managed to bring a bit of sunlight and positivism in the room. A really cool band with a nice flow and great attitude, enjoyed seeing these guys on stage!

Last band of the night boasts to be the saviors of melodic death metal. I must say that Aphyxion delivered a really strong slab of that on stage. I’m not sure if I completely agree with their bold statement, but they have a damn solid sound and hit hard. Their older songs are very harsh melo death tracks where you almost might wonder where the melody is. Great tracks all-in-all, especially when the lower growls by vocalist Michael got backed with the screams from bassist Jais. But when they brought out their more recent tracks like ‘Pain‘ and especially ‘Sleepwalker‘, they showed their evolved sound towards a more melodic sound with the introduction of clean vocals by Jais. These tracks are simply a step up from their old work. It’s catchy, it crawls in you head and after just a couple of lines, you can already sing along. These guys are going places, mark my words.

After seeing these 3 bands all in one night, it told me that there is clearly something interesting in the water over there in Denmark. It also makes me really interested to catch the other bands of the Prime Collective live some time in the (hopefully) nearby future. If you want to check out yourself what bands belong to that talented bunch of artist, go check out their site here: http://www.primecollective.dk/artists