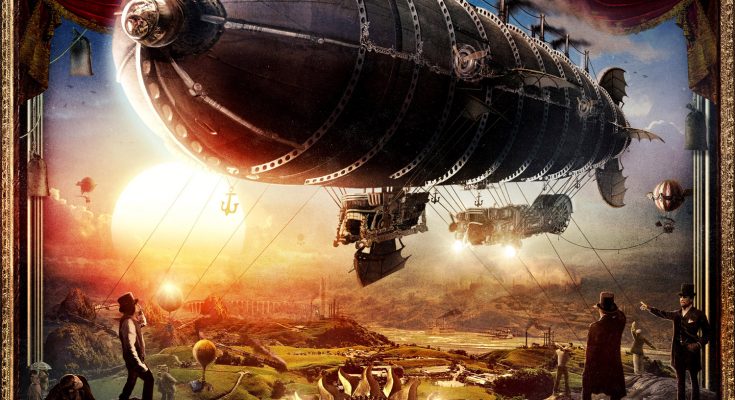 It has been a while since an album in its entirety has blown me away so unexpectedly. By reputation or merely based on samples, I would never have listened to Pyogenesis, as it really doesn’t fit the description of my favorite music. Volunteering to review their new album was a huge step in the dark, but by Jove am I happy I took that step! Now already, I have pushed the repeat button way more than necessary for writing this review. Throughout their career, the band from Stuttgart has been juggling with styles and themes (extreme death metal, gothic metal, rock…) and though I must confess I am not familiar with their earlier work (the band has been around since 1991, longer than I have even walked this earth), I think they have hit the jackpot with the concept of A Kingdom To Disappear.

Of course, I wasn’t completely unprepared. The cover artwork is pretty nice, displaying a modernistic fantasy landscape with a huge steampunk zeppelin slowly floating over it. That did kinda draw my attention, I must say. It’s a really good job, you can keep staring at for hours and still discover new details. But, as in love: a nice packing is fine but there better be some content behind it.

Luckily, A Kingdom To Disappear has an amplitude of content. Lyrically, Pyogenesis takes the risk of wandering down a trodden road of personal problems and self-pity. Unlike many other bands, they manage to put some depth in there and don’t choose the easiest way. More importantly, singer Flo Schwartz and his merry men sell it with such passion that you are uncontrollably forced to rise from your couch, grab a cucumber (for a microphone, just to be clear) and chant along.  One advice, Flo: stick to your great clean vocals, the grunts don’t really convince us… Strangely, despite the rather pessimistic lyrics, Pyogenesis brings some pretty uplifting music. The vocal lines are quite dominant on this album. Together with the music, A Kingdom To Disappear feels like a soundtrack for one last cosy drunk night around the camp fire on the last day of your favorite festival…

Musically, it is virtually impossible to label the music of Pyogenesis as a specific genre. They are truly a quite unique band with an incomparable sound. Of course, for the sake of giving the reader an idea, I feel like I should carry out a desperate attempt. Seemingly, there are two dominant influences throughout the album. Songs like Every Man For Himself And God Against All, I have seen my soul and Blaze My Northern Flame carry hints of Swedish melodic death metal/Gothenburg (think early In Flames and Dark Tranquility).  These are the most energetic, catchy songs with a huge sing-along potential at the beginning and end of the album. As is typical for Pyogenesis, these high-energy parts are interrupted by very serene vocal parts.

This brings me to the second major influence in the album: heavy/power metal and AOR (Demons and Wizards, Gamma Ray, Ten…). This is most audible on songs like the title track, A Kingdom To Disappear, the ballad New Helvetia and That’s When Everybody Gets Hurt which don’t shun choir voices. We (1848) is a slightly weird exception: it evolves into straight-up pop punk or garage rock comparable to 30 Seconds To Mars, Janez Dedt and other sinners. Put a seventeen year old singer with a cute face in this song and you can sell out stadiums to hordes of emotionally confused teen girls. Let’s call it this album’s guilty pleasure, because it is soooo feisty J. Another conclusion we can draw from this: Pyogenesis is a very versatile band and will speak to a broad diversity of metal lovers. This is quintessential Pyogenesis: they refuse to follow the predictable roads to fame, but instead create whatever they feel like playing.