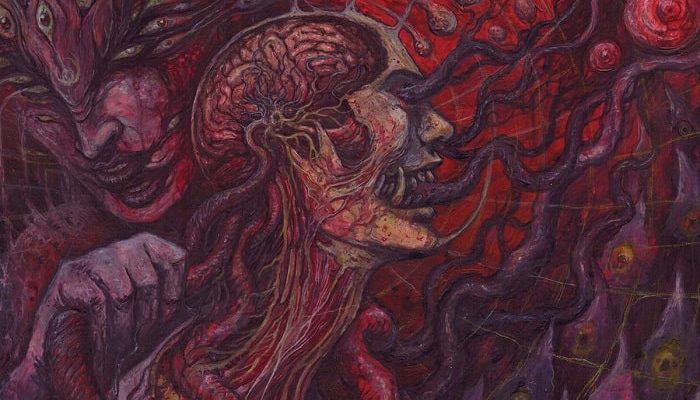 United Kingdom’s death metal outfit Qrixkuor brings us their first full-length album “Poison Palinopsia” after quite the long wait. Formed in 2011 by founding guitarist/vocalist S., who combines his talents to forge chaotic and nightmarish sounds of death metal with Grave Miasma‘s DBH on drums, and Temple Nightside and Vassafor’s VK on bass. The lineup brings abysmal chaos in the duration of forty-eight minutes. Much of the composition on the album is somewhat similar to bands like Vassafor and Abyssal. During the length of the album, Qrixkuor explores extreme boundaries that oftentimes manifest in stylistic tempo shifts and architectural sonic landscapes of the eccentric elements of occult death metal.

There is a great interplay of instrumentation even though the tempos are oriented towards disorder. The guitars churn out bleak dissonance. Though it seems the prowess of the members becomes thoroughly unhinged by bringing extreme velocity to dazzle your mind. “Poison Palinopsia” isn’t the type of death metal album that you might have in mind, but might be the one you need. The beautiful album cover seems to be textured by vibrant colors and the music here is unhinged and chaotic. The two songs that make up this album, are saturated by monochromatic dissonance, tremolos, and the cacophonous blasting drums topped by inhuman growls. Despite the riffing density and its sonic complexity, the tempos are full of blast beats. The mammoth 1st track “Serpentine Susurrus – Mother’s Abomination” is twenty-four minutes soaked in rawness with jarring dissonance and eerie sounds dragging you into the whirlpool of a vortex. “Poison Palinopsia” exudes corrosive riffs that create layers of dissonance and apart from the grinding drums, there are different compositions that add depth. Guitarist/vocalist S. has sculpted the most paradoxical song structures, as each cut involves hellish orchestral samples.

The drumming is precise, erupting into a full rapid pace, and they sound twisted as the guitars with all the swirling noises in the background adding to the overwhelming atmosphere. While the experimental pieces of the classical music samples provide a hellish inferno to the music, the guitars unfold plenty of droning riffs. The crushing display of the grinding drums outflow with demonic grunts and inhuman growling. There are some similarities to bands like Portal, where the production of the album is raw and lo-fi filled with inharmonious chords. 2nd massive track “Recrudescent Malevolence – Mother’s Illumination” plunges the listener into abysmal depths yet again, as a matter of fact, I find the slower moments more intriguing than the chaotic twists of the guitars and drums. Qrixkuor conjures a dreadful mood for the listener leaving him in a continuing conundrum of frightening soundscapes.

The ambient noises and the slow riffing enhance the atmosphere while the drumming patterns demonstrate the creative technique of DBH. Each moment of this harrowing track sprawls on creating an atmosphere of horror, the vocals conjure the unseen forces of darkness. Mainly the guitars provide unnerving effects. “Poison Palinopsia” resonates at different paces and the petrifying quality of the vocals creates a nightmarish experience. Each segment of the eerie guitar droning is amalgamated with another ambient section. The most astonishing part is how the drums mingle with these different elements. Even with this experimental musical paradox which seems quite puzzling, there is a limited variation among the two songs.

The guitars build up thick density leaving the sonic blast and technicality for the drums to manifest their powerful effect. The dissonant sections create many layers and this is to say that both the drums and guitars flow at different speeds, nothing symmetric here. Qrixkuor’s full-length album is truly mystifying and full of twists, if you are into bands like Portal, Abyssal, and Teitanblood then check this malicious piece of occult death metal album.