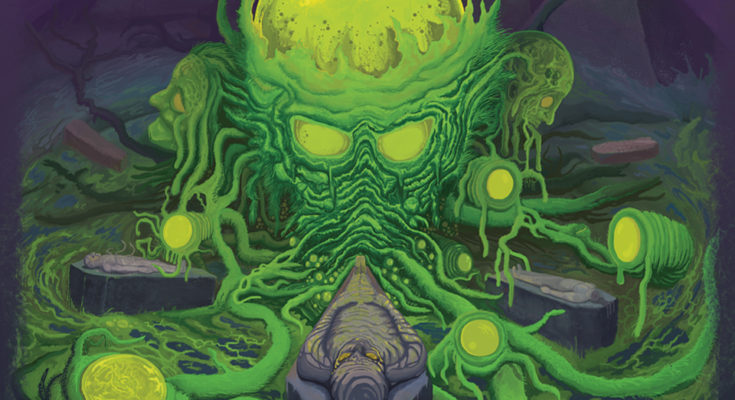 Every now and then you’ll be looking for a band within a particular genre, and find out they sound completely different from what you expected. Now, some people deem genre classification to be pointless and restrictive, meaning music should be enjoyed for what it is. They’re mostly right of course, but then again I wouldn’t have had the pleasure of discovering that Seattle’s “stoner/sludge” trio Rat King did in fact put out an album that actually meets my thirst for grindcore far better.

While Rat King‘s full-length debut ‘Garbage Island‘ is indeed a lo-fi stoner rock album, they have shifted their sound consequently for their sophomore record ‘Vicious Inhumanity, which is out today via Within The Mind Records. I was positively thrilled to find out it sounded much heavier than I expected. Yet, while it was an enjoyable ride, this record doesn’t come without its fair share of issues.

There are very interesting and fun moments on ‘Vicious Inhumanity‘. The first half of the album especially packs a punch. Rat King start off with a brief intro on the first track ‘Matanza‘, which is quickly followed up with pummeling blasting and string grinding throughout the next two tracks, and we are treated to a cool bass solo on the more sludgy track ‘Soledad‘.

But then Rat King head into another direction, that brings us to a place somewhere between sludge and groove metal. After such a strong start, this would be a weird place to end up. While this isn’t for me, there must be some who will enjoy this shift. I thought it went a little downhill from there on, and it took me out of the experience. I prefer my records to be more coherent, but I suppose there are some who will mind less.

The vocal performance is on point, balancing between powerviolence or crust bellows (think Doom), and new school death metal growling (think Gatecreeper or Genocide Pact). And man, how about that artwork, huh? It just looks lovely. It was actually my main reason for stumbling upon this record, since I was looking for stoner/sludge in the first place.

My major beef with this record are the drums. While drummer Tyler doesn’t do a bad job, especially on those d-beat skanks and blast beats, which are old favorites of mine, his tempo is off on more than one occasion, and some cymbal placements are just awkward. Sometimes he hits the china so boisterously, that the whole thing starts to sound really messy. This would be a case where less is clearly more. I can’t really agree with the overall sound of the drums either. On ‘Stranded‘, to cite the more obvious example, drums just sound bad.