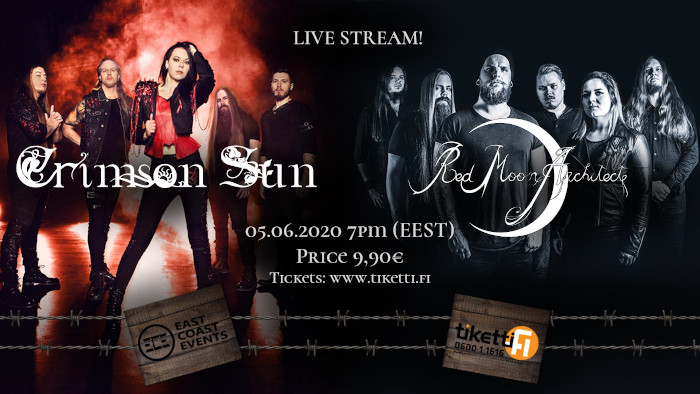 What’s better to start the weekend than watching a cool streaming concert of a good band on a Friday night? Exactly, getting to watch 2 concerts of 2 promising Finnish metal bands in a package deal. East Coast Events brought Crimson Sun and Red Moon Architect together for a couple of hours of musical entertainment and give a platform to these bands to show what they go.

I remember Crimson Sun very well, being one of my first shows of 2020 when I caught them at their release show. Their shows are energetic, melodic and induce fist pumping, head banging and singing along. It was really cool to see them move around on a bigger stage this time around, compared to the tiny venue of last time. I could easily see how a decently sized stage really benefited them.

Vocalist Siini‘s fist pumping, which she usually does to rile up the crowd, looked a bit funny at times, but nice to see that they were keeping their spirits up. The biggest part of their setlist was reserved for songs of their latest release, ‘Fates‘ like ‘Virtual Reality’, ‘We Are One‘ and ‘Essence of Creation‘; all bangers that are damn catchy and fun to hear. The band had a really good energy and showed off with their talent and stage presence. I was however not the happiest with the sound or even the video quality. Though on the other hand, I’ve been pretty spoiled with streams from much bigger bands with bigger budgets, so I’ll forgive them for that.

After the sun comes the moon,and much was the same at this event. After the relatively bright music from Crimson Sun, the doomy and dark tunes from Red Moon Architect took over the speakers. Since they recently signed up for the talent-packed roster of the up-and-coming Noble Demon Records, I was pretty curious to hear what they had to offer. And after finding out that quite a couple of these guys are also part of the much lauded international doom outfit, Aeonian Sorrow, I got even more intrigued.

On the tunes of slow and ominous atmospheric music, the silhouettes of the band members got revealed on a stage filled with smoke and deep red light. The music brought the typical droning sounds of doom metal, but it somehow has a certain beauty to it that easily mesmerizes. When female vocalist Anni Viljanen carefully lays her almost ethereal sounding vocals on top of the composition it feels soothing for a damaged soul.

But when male vocalist Ville Rutanen infects the atmosphere with his deep gutturals from the depths of a rotten grave, it shocks you and brings you back to earth. It’s doomy, epic music that holds a wonderful contradiction, keeping the balance between ethereal beauty and raw harshness perfectly. A wonderful first meeting with this band!