Home Death Metal Revolting – The Shadow at the World’s End 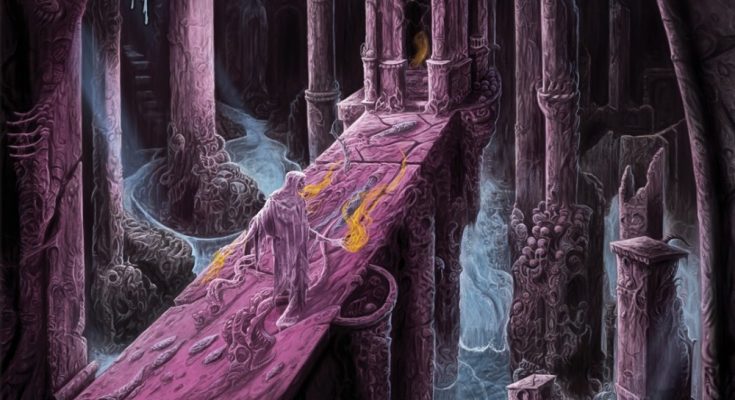 One of Sweden’s most prolific musicians is the guitarist/vocalist Rogga Johansson A.K.A Revolting Rogga. His productive work since 2009 has classified him among the well-known artists in the underground metal scene of Sweden. The 44-year-old composer has been active in many bands such as Down Among the Dead Men, Johansson & Speckmann, Ribspreader, Paganizer, and tons of other bands. In 2008 Rogga initiated his newest project band Revolting and released six full-length albums since then. The 7th and latest studio album “The Shadow at the World’s End” was released via Transcending Obscurity Records on November 27th. On the album Rogga along with Tobias (bass guitar), and Martin (drums) encompass the catchy melodies of that which were presented in the past by many acts such as Hypocrisy and Edge of Sanity.

The album opener “Defleshed” immediately emphasizes the classic melodies of the Swedish death metal. With a sound that captures the old school vibe, Rogga directs his craft to the ageless masterworks of the nineties era. And by melding catchy melodies of the rhythm guitars and imposing pummeling drum beats, the band wields its finest work to date. “The Shadow at the World’s End” conveys high-quality death metal, each track achieved by consistent memorability.

There are many ingredients displayed in the typical form of the traditional Swedish style of riffing. “1888” focuses on these formulations with a buzzing fat tone of the chainsaw guitars splitting through bones. The drums sound powerful and are perfectly intermixed with the other instruments. The old school vibe is put into effect right from the beginning. When it comes to the melodies, Rogga forges his own trademark sound and beside the crunchy riffs, the vocals play a role in maintaining the sheer power. The rhythm sections are some of the strongest elements on the album even though nothing groundbreaking.

Most of the tracks on the album are very accessible, resulting in an enjoyable listening experience. Tracks like “Daggers That Mimic Life’s Pain” consist of high qualitative melodies of the modern kind. “The Shadow at the World’s End” is good conjunction of modern death metal and the thrusting elements of Stockholm death metal. Rogga combines the epochal characteristics taking influences from many bands. Regarding the album production and mixing the latest craft is by far the best-achieved studio recording.

Some of the catchiest songs that make the album memorable are tracks like “To the Bitter Bleeding End”. The song begins with layered melodies and striking drum beats. The mixture of tremolo pickings contrast with the energetic drumming and vocals. “Carnage Will Come” presents the pure and the solid fraction of old school death metal. Revolting is a perfect example of the Stockholm death metal and their newest album displays a boundless strength of musicianship.

“Revolted by Life Itself” proceeds to the edges of death ‘n’ roll where the heavy effect of the chainsaw guitars and the rattling drums are brought to pay homage to bands like Entombed. I haven’t heard many Swedish death metal albums this year but the newest album by Revolting has that old school spirit throbbing in its nine songs. This is highly recommended for everyone who likes the Swedish style of death metal, especially for fans of Dismember, Edge of Sanity, and Grave.