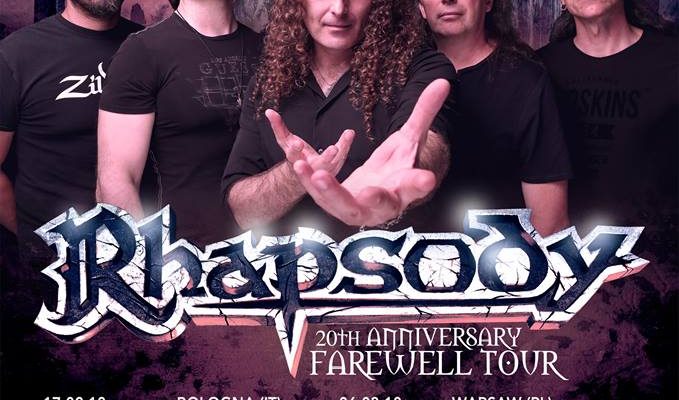 As a huge fan of the Italian symphonic power metal band Rhapsody it would’ve been a shame to miss this tour in honour of the 20th anniversary from their first official release. With this Farewell Tour the original band members Fabio Lione, Luca Turilli, Dominique Leurquin, Patrice Guers and Alex Holzwarth reunite for the last time.

I am really super excited to be part of this unique and special event together with Fabio and my other friends. The fact of playing legendary songs like ‘Wings Of Destiny’, ‘Beyond The Gates Of Infinity’ and ‘The Dark Tower Of Abyss’, never played on stage before, will be the best way to celebrate the 20th Anniversary and a great reason to meet together for a very last time. This farewell tour represents for me the closing of one important chapter of my music career, as in the future I will dedicate myself to the cinematic music style of my new ‘Luca Turilli’s RHAPSODY’ band and to other important projects exclusively. Don’t miss such amazing event. It will be the last time you will be able to see me, Fabio and Alex Holzwarth together on stage playing some Rhapsody songs. We wait for all of you to share some wonderful emotions and live together some memorable nights!

‘Magic’… this is what I always wanted to find in music… and when I think about this great and unique opportunity to be again on stage with Luca, Holzy, Dominique, Patrice and celebrate with them the 20th Anniversary of the band… well… I can say this is truly ‘magic’! What an emotional moment remembering our great friend Christopher Lee, our stories, our feelings. After many years and things happened, I feel the time is right now… the time to close this important chapter of my artistic life in the best way, with my old friends, and share such ‘magic’ once again. We will celebrate 20 years of band history with all of you, beloved fans, in an unforgettable and glorious ‘last time party’. Be part of it!

Opener of this legendary evening was the Romanian melodic rock/metal band Scarlet Aura (***1/2) with an angel entering the stage. This angel turned out to be Aura Danciulescu, the lead singer of the band. She really enjoyed herself on stage, she was dancing and she even played on her decorated tambourine. She didn’t even care the room was not completely filled yet. There was verbal interaction with the audience and in the songs she mostly made us clap on the rhythm of their music.

Some people went fully into it, but most of them were enjoying themselves in silence. I think their highlight of their performance was their cover ‘Zombie’ from The Cranberries. It was a nice warm-up, but I found it unfortunate that Mihai Thor Danciulescu (guitar) and Catalin Ungureanu (bass), who delivered a top performance musically, only sung the backing vocals live in one song. That sounded so much better than the backing vocals on tape.

Next on was the Finnish heavy metal band Beast In Black (*****), founded by Anton Kabanen (guitars) after he parted ways with Battle Beast in 2015. As support act this was a great opportunity to promote their debut album ‘Berserker’ and they did more than that. This band set Trix on fire, everyone was enjoying themselves and Beast in Black‘s sense of humor is contagious. Both vocally and musically this was a fantastic performance and a more than successful warming up for the headliner.

Suddenly smoke appeared on the stage, the announcement that it wouldn’t be long before Rhapsody (****1/2) would perform. These men hit the stage with a lot of enthousiasm. Everyone was singing along and there was a lot of interaction between the band and their audience. Some songs were a tribute to people who are important to Rhapsody and Fabio even sung a tribute to us after what he called an easy voice warming up. But even when you’re in the second part of the show it’s not a bad idea to do a little warming up with the audience to sing Andrea Bocelli‘s ‘Con Te Partiro’.

So while Fabio was saying goodbye to us he proved his vocal skills are very well developed, while I’m sure nobody doubted that. Next to singing, he also liked to talk with us. Sometimes it took too long, but maybe Italian people just like to talk a lot… Despite the fact that the smoke sometimes hid the band, it was a beautiful farewell with 16 songs and a few instrument solo’s whereby each band member was put in the spotlight.

One thing I can say for sure: Rhapsody will be missed.
Photo’s by Andy Maelstaf.