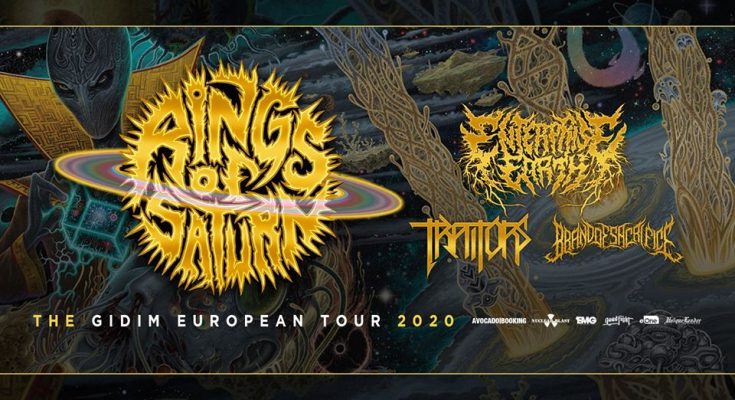 I’ve attended a few Hellhole Project gigs now, and I gotta say they have yet to let me down. Somehow these bookers have managed to string artists like Mortiis and Orphaned Land in the past, which are real quality additions to their resume. Earlier this month, they got hold of a date for the ‘Gidim European Tour’, the promotional tour on which technical deathcore astronauts Rings of Saturn embarked following the release of their 2019 record ‘Gidim’. The night would be held at one my all-time favorite venues in Belgium: Brussels’ very own Magasin 4, a perfect spot to disrupt the space-time continuum with some of the heaviest music around. Support would be ensured by none other than Enterprise Earth, Traitors and Brand of Sacrifice.

Do you like groovy new school deathcore? Do you also happen to be a fan of the manga classic ‘Berserk‘? Have you for some reason always dreamed of a combination of both? Well, look no further because here is Brand of Sacrifice, a US/Canadian band who combine death metal riffs, heavy breakdowns and lyrics revolving around the ‘Berserk‘ lore. I was really curious what they would bring to the table, keeping in mind the description above.

While the manga bit wasn’t really apparent, the deathcore part sure exploded from the stage. They didn’t indulge in stage antics that would reference the subject matter, but that’s fine. They leave that to the fans. The set was great! Brand of Sacrifice played a far more interesting set than I usually get from an opener. I thought the set was over rather quickly despite them bringing six songs to the table. It just goes to show that time flies when you’re having fun.

My goodness, this was a heavy show. Traitors hails all the way from swampy Florida. And that’s actually how you could best describe their sludgy deathcore. Their heavier than heavy sound, the likes of which you get from bands like Black Tongue or The Acacia Strain, makes you feel like you’re angrily wading through never-ending marshes. I enjoyed their set tremendously.

Still, the more entertaining bit was probably the crowd, who at first just went completely nuts. With violent dancers throwing in some of those hilarious-from-a-distance wannabe kung fu moves or try-hard karate chops – which are often much hated by your average moshing metal head -, Traitors seemed to have dragged a very intense reaction out of the audience. But that’s when the dancers’ behavior took a unexpectedly weird turn. Suddenly everyone in the pit started to jump around like frogs. Well, I guess frogs do belong in a swamp? But then they started doing jumping jacks and that’s when all logic just went flying out the door. Traitors seemed to enjoy it as well.

I’d seen Enterprise Earth with Oceano and Chelsea Grin in 2018 and I admit I was pleasantly surprised. It reminded me of the earlier glory days of deathcore, more specifically of the Suicide Silence persuasion. While I enjoyed their set back then, it did suffer from poor amplification. The venue they played in is a little shabby that way. At Magasin 4, Enterprise Earth played with a far better sound leading to a more enjoyable experience.

Until their guitar suddenly gave out. Fortunately the second guitar track kept playing. Now that was a lucky save in this particular situation, even if it can lead to some people being a little disillusioned. Don’t fret. It’s not like they’re play-backing. It’s actually better to have a track playing than having your music sound much weaker than intended. I saw Cannabis Corpse in January and they didn’t play with a pre-recorded guitar track. As a consequence their music lacked the punch it has on record. Despite this minor issue, everybody dug the show.

Set list:
Sleep Is For The Dead
Scars Of The Past
He Exists
Ashamed To Be Human
Shallow Breath
We Are Immortal
The Failsafe Fallacy
There Is No Tomorrow

I had unbelievably high hopes for Californian tech death prodigies Rings of Saturn. I’ve seen performances in the genre which were air-tight and I’ve seen much less convincing ones, where it was all just a big indistinguishable mess. It’s no secret ROS‘s albums are extremely clean recordings which have been through extensive mixing and mastering. This is to be expected for music of this level of complexity. But you can’t help but wonder if they’re ever gonna pull it off on stage. I’ve seen my share of tech death bands over the last few years (Archspire, Beneath The Massacre, Inferi, Ulcerate, etc) so I’ve gotten past that feeling of being overwhelmed by technicality, considered off-putting by some. Thus I knew what to expect, what I loved and what I hated. I also knew what error margin I would allow myself to endure.

Rings of Saturn kick off with the theme song for ‘2001: A Space Odyssey‘. Yes, yes. I know it’s originally by Strauss. But looking at the context, you’ll just have to concede we’ll make the reference to the sci-fi classic. And from then on it’s just one insane track after the other. Drums are tight as hell, switching it up between gravity-defying blast beats and slower grooves and a few breakdowns too. The guitarists show off their jaw-dropping skill by sweeping and performing arpeggios almost non-stop, while singer Ian Bearer squeals through nearly the entire set. The whole thing is as impressive as it is fun. Rings of Saturn is truly as amazing on CD as they are live. I can hardly believe they pulled off such complex music on stage. I left the venue that night with a big smile on my face. 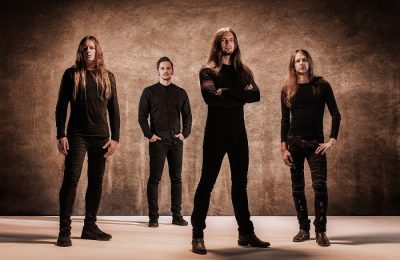