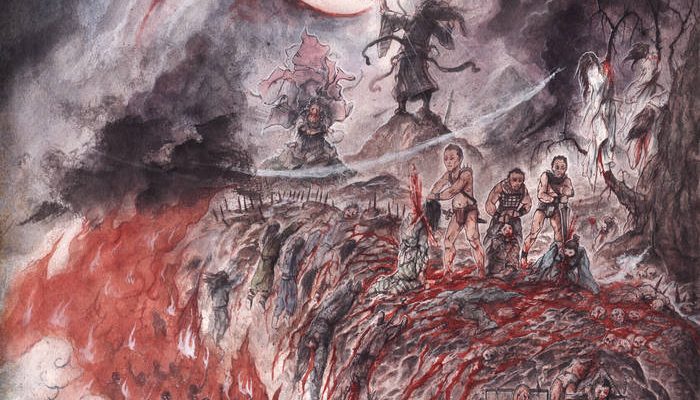 It might be unusual to see death metal bands from USA that choose a Swedish death metal sound, although there are a few examples such as Gatecreeper which adopts the HM-2 Buzzing tone. Ripped to Shreds is a new death metal project from the USA led by the multi-instrumentalist Andrew Lee (ex-Disincarnation, Ghul).

Who is the only member behind the creation of this project, and also involved in other bands such as Azath, and Skullsmasher. One of the things which I have noticed about the band is the interest in the ancient Chinese mythology. After debuting 埋葬 “Mai Zang” (which translates to “Burial”) last year, the band has displayed a strong adherence to the Swedish buzz saw sound.

Ripped to Shreds have cemented their style with the death metal bands like Dismember the music in general combines the crusty style of OSDM including some doom influences. These various ingredients are combined into one massive resonance. Being pretty much rooted in the old school death metal, the concentrated artillery of the guitar riffs are widely launched on the latest EP.

The variety of the song structure especially the drums gives the tracks their identity is what makes this EP a great follow up to Mai Zang. Now there are a few things which makes this band so interesting, first is creativity in adding various styles in each of the four tracks of the EP. The vocals are mainly uttered in loud piercing shrieks making it difficult to understand but that’s not an issue. The talent of executing the instruments is another plus mark to be added to Andrew Lee.

You can hear elements from bands such as Dismember and Entombed the first track 喪家 “In Mourning” is launched by the hail of the guitar riffs and overwhelming blast beats. But what makes the band so distinctive from the many other bands who find a musical intimation to the Swedish death metal is the art of displaying the riffs. Since the elements of the Swedish OSDM are highly featured on Demon Scriptures there are many groove sections which are amazingly performed.

The tracks are basic and unsophisticated but they’re soaked with the classic style of death metal. In other hand the drums on the EP are dynamic and mechanical as they act like a backbone to the tracks. The grindcore influences are surprisingly featured on the second track “Pseudoelixir” 江湖郎中 ; only 45 seconds of scorching riffs and blistering blast beats. The quality also denotes these distinct influences come directly from grindcore, considering the fact that the band title was taken from the death/grindcore band Terrorizer.

“Nine Familial Exterminations” 株九族, has sufficient amounts of blasting where the drums supply fast beats and the guitar section provides many solid riffs. The final track is the centerpiece of this EP, “Sun Moon Holy Cult Part I” (日月神教第一節) is an epic death/doom track which lasts for 10 minutes long. The main focus here is on the slow doomy riffs and high pitched cries that echoes through the soundscapes. While the guitars are low tuned, the second half of the track kicks off at high speed with drums executing fast blast beats. Ripped to Shred‘s music ventures into different course of compositions.

It’s like a zigzagging musical patterns attached to each other, and when the band applies the doom influences the music sounds very different from the methods of Hooded Menace and Krypts. It’s firmly attached to the old school technique, the guitar tone on the final track is heavy and down tuned as I mentioned. The final moments of the track is where the melodies and slow tempos are shed in full focus. As you can hear vivid guitar melodies and you’d wonder about the talent of composing such music. And with the release of the new EP Ripped to Shreds cement their sound and explores deep into the core of OSDM, Demon Scriptures 魔經 is one the best EP’s of the year 2019 so far.