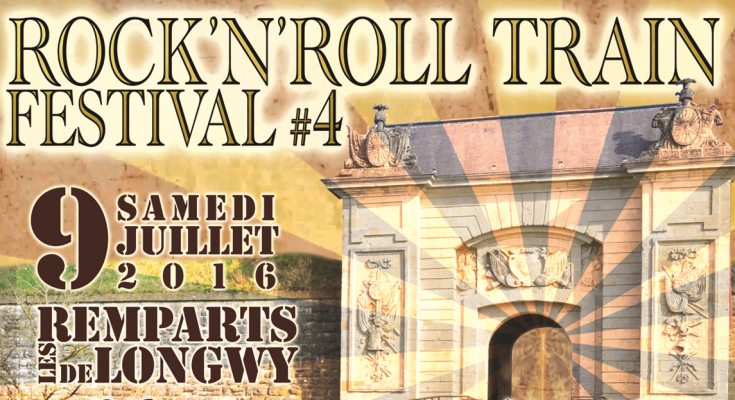 Are you tired of all the big festivals and do you want to scale it down a bit in order to discover some new lesser known bands? Then keep on reading, because Grimm Gent took a trip South to explore the fourth edition of the Rock ‘n’ Roll Train Festival in Longwy, France, on the 9th of July.

Longwy is situated 277km from Ghent, just 10 minutes over the border with France. Easy to reach and after a 2h40 drive there are plenty of free parking spots all across town to lose your car for the weekend.

The festival and camping area itself are unique. While Metaldays can claim they have the most amazing nature, Rock ‘n’ Roll Train certainly has one of the most unique historical locations to host a festival. Recognized as a UNESCO World Heritage Site the New Town is part of the 17th century military fortifications created by Marquis de Vauban. Long story short: the festival and camping area are located in a fortified citadel which creates quite the spectacular views. Food and drink stands are placed against immense walls and the stage is situated under a bridge overlooking the whole area. Once you have your wrist band you can travel between the camping area and the festival site in the long trenches surrounding the inner structure of the citadel without the need to cross a street again. 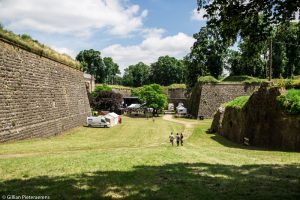 Entrance to the festival area 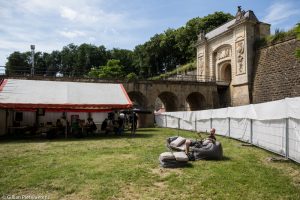 Since the festival took place only on Saturday this year, Longwy also offered the perfect place of departure to combine your weekend of metal madness with some sightseeing. Located in the cultural region of Lorraine historical cities such as Verdun or Metz are less than a one-hour drive to the South. The border with our little neighbor Luxembourg is only six minutes from the town which makes it easy to explore the Grand Duchy before heading back to Flanders. If you feel homesick you can still immediately return to Belgium after the festival and make a few stops in Wallonia. You can follow the curves of the Semois river in the Ardennes or go north along the Lesse river to explore some caves in Han-sur-Lesse and taste the Rochefort Trappist beer in its own monastery.

We arrived in Longwy Friday night around midnight after a 2h40 drive. While the city itself is easy to reach, indications towards the festival area are scarce to non-existing. Luckily we knew we had to look for an immense fortified structure. So after a tour around the citadel we found the tent for the ticket exchange. All packed and ready to set up the tent we were surprised to hear ‘the camping area is too far to walk and we best drove there with the car’. Following the rudimentary explanations, we cruised around town for over 45 minutes looking for the small gravel road that leads to the camping. Starting to feel immensely frustrated, we decided to activate our phone’s internet and GPS system (while abroad) to compare the basic sketch of festival’s volunteer with Google Maps. After this we quickly found out the road to the camping area was located a mere 300m from the ticket exchange office! Clearly the French have not walked distances with a backpack and camping supplies on Graspop or Wacken! So we dumped our car where we parked it in the first place and finally set up tent around 1:30 am.

All this was quickly forgotten once we opened up the tent in the morning to view our surroundings inside the magnificent fortified citadel (see location). In daylight several more cars arrived at the camping area to drop of their stuff and park the car further away. At this point also a volunteer on the roadside was indicating cars where they needed to be. All very convenient if they would have just set up a sign with the word ‘camping’ next to this road. 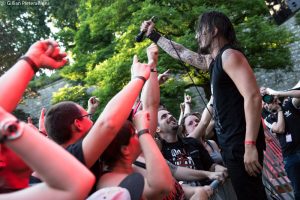 The festival site is small and cozy with no need to walk far for toilets, drinks or food. While a slowly lost sight at bigger Belgian festivals, at RnRT they still have the sauna/Dixi toilets. They were well maintained throughout the festival. A necessity in the hot 30° C temperature. Food choices were various and very reasonable in price. You could choose from homemade pasta, sushi prepared before your nose straight from the fridge, a wide selection of Mexican food, … All fresh and no cardboard taste! The only disappointing fact was the €3 beer prize for a 25cl Kronenbourg. Wise men drink more and buy half a liter for €5.

There were a few other remarks. For example, fact that regular visitors apparently could not leave again once inside the festival area. Luckily it was a hot day, but I can imagine many people (especially the ones with children) will want to collect a sweater or rain jacket in the case of changing weather conditions. Finally, the festival could improve in terms of communication. This way we had to find out Oil Carter had cancelled from the band that played after them. Also, Lacuna Coil suddenly showed up for a signing sessions without any prior announcement. Luckily, news spreads quickly on the small festival ground.

These few points of improvement should be seen against the many qualities this festival has to offer. If there were still any difficulties, we could always ask the many friendly volunteers on the camping or festival site. Of course, speaking French was a huge advantage here. 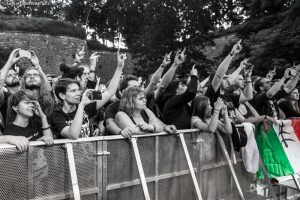 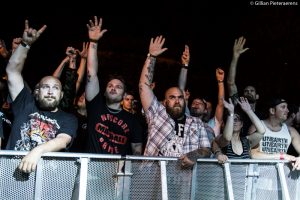 Because of the hassle on Friday night (see organization) we unfortunately missed the end of the pre-party. Luckily, Saturday still offered a packed program with 12 bands to discover. Rock ‘n’ Roll Train really presents as a family festival with rock band Les Mini Vengeurs early in the morning especially for the younglings. Although we decided to sit out their show, we saw children playing around us the whole afternoon. It gave the festival a very laid back atmosphere.

While the audience was small, the power metal band Seyminhol could already count on the enthusiasm of the people in front of the stage. They played a varied set that did not bore after a while. I was not the only person impressed since later on the day several more visitors walked around in their freshly bought Seyminhol shirts. 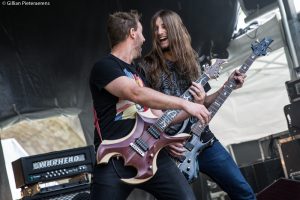 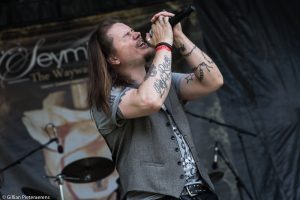 While most visitors seek the shade of the higher viewing stage or the trees in the blistering afternoon sun, some fans dare to approach the stage for The Last Wanted. The only Belgian band on the line-up plays hardcore punk and does not hide their love for headliner of the evening Madball. With a rawer voice than we are used in the genre the singer incites the crowd in front of him. The band does not stand still on stage and gets the first feet moving. 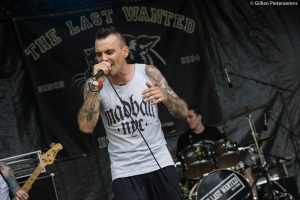 When Burning Heads started sound-checking an hour before their playing time they told the confused crowd that Oil Carter had cancelled their performance and that they would take their time setting up. The ample preparation time provided for an excellent sound quality. This is actually something that can be said for all the bands so my kudos go out to the sound engineers at RnRT! Burning Heads play straightforward punk with all four members contributing their vocal lines. With room for melodic parts they keep the crowd moving and even lure some more people out of the shade. 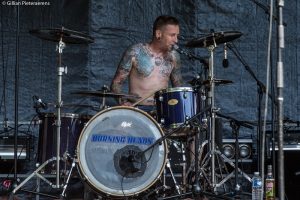 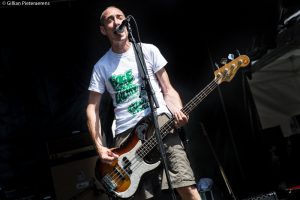 Nitrogods from Germany might well be the discovery of this festival for me! The Motörhead vibe is strong in this one. They play alcohol infused hard rock that makes you want to fill up those beer cups again. The Germans congratulate France on the win in the Euros (in the funniest French accent ever) and play with a big smile. To prove they don’t do playback we are treated with live percussion on a beer bottle. Nitrogods is the kind of band that might not reach a massive audience in their genre through records, but succeeds in delivering a memorable show with excellent live quality, humor and lots of crowd interaction. 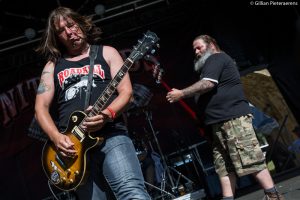 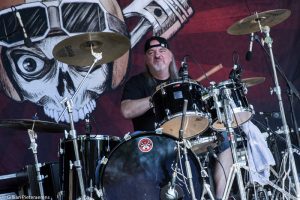 The Inspector Cluzo is one of those bands that makes you wonder where they are hiding the other members. Guitarist Laurent Lacrouts and drummer Mathieu Jourdain offer a full-in-your-face package of dance-able funk rhythms and groovy hard rock. They perform sharply dressed in costume in the searing heat. Another great live discovery! Fun fact: while not rocking out in their costumes these guys are organic farmers who run their own farm in Gascogne! 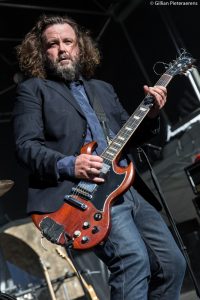 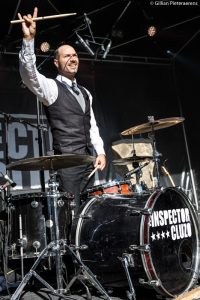 Dagoba has already proven it can ignite a large crowd at Graspop Metal Meeting so how does it perform for a few hundred metalheads in their home country? Now that the high walls of the citadel provide more and more shade more people step out and Dagoba’s infectious grooves make it hard to stand still. One thing is for sure: those circle pits and walls of death must have hurt like hell with all those sunburned bodies! Dagoba asks a lot of energy of its audience and it gives right back with a very intense show. 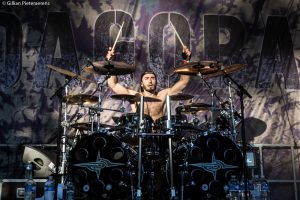 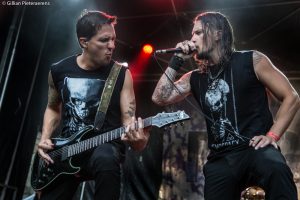 Headliner of the festival was the Italian Lacuna Coil who came to present its new album Delirium (released end of May). Bass player Marco Zelati had dyed his beard in the colors of the French flag for the occasion and newcomer on the guitar Diego Cavalotti showed us his energy by jumping up and off the platform on stage. However, it was the vocal performances of Andrea Ferro and Cristina Scabbia I was most curious for. Delirium pushed the band in a harder direction musically and especially Andrea stepped it up a notch with introducing much more growls in his harsh vocals. I was happy to see how they equally delivered this energy on stage! With their 90-minute playlist we got to hear all their greatest hits of the bands long career and they proved themselves a worthy headliner. 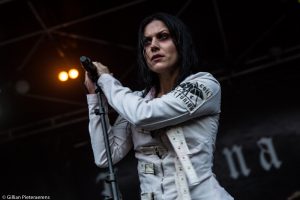 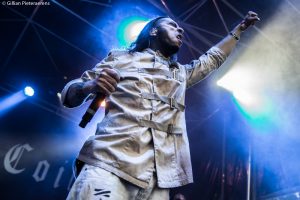 The only disadvantage Lacuna Coil had was that the percentage of people who came for the hardcore acts was much larger. So the intensity of the crowd was even bigger when New York City hardcore outfit Madball took the stage. Vocalist Freddy Cricien wore a The Last Wanted shirt and gave a big shout-out to the Belgian band who could be seen dancing side-stage. Despite the differences in genre also Lacuna Coil received credit from Cricien as long touring friends. Front stage the crowd is going wild and they keep pouring over the security fence. The band asks for more people to come closer but security pushes them away unrelentingly. So several times during the show Cricien just stands on the fence to join the crowd. We saw several hardcore influenced bands today but Madball proved why they are the real deal. 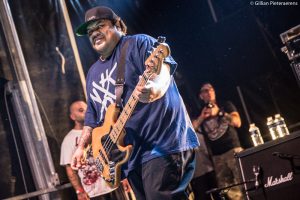 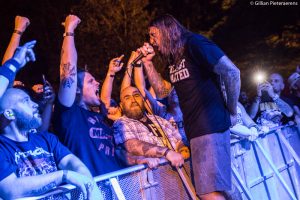 Rock ‘n’ Roll Train proved to be more than a pleasant discovery. Keep an eye out for this festival next year if you want to join Grimm for a smaller but not less exciting festival on this amazing location!