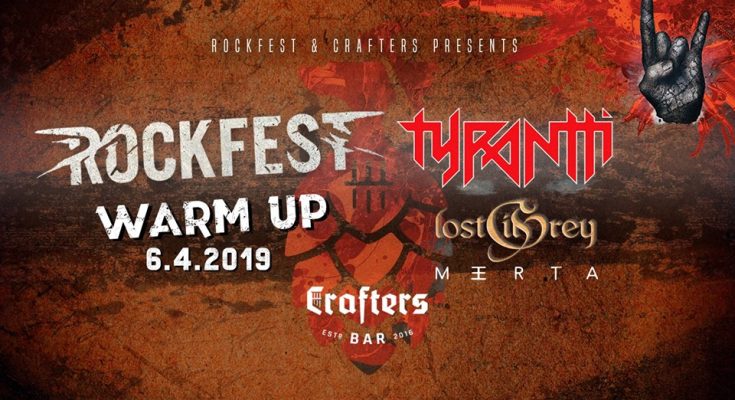 In the beginning of June, the city of Hyvinkää gets taken over by the circus that is Rockfest. Thousands of rock and metal fans travel to the smallish city in Finland and some of the biggest bands around drop by to rock our socks off! As a little preparation for that massive event, a proper warm-up gets organised shortly after Spring starts at the local craft beer bar Crafters. Excellent beer (and whisky for those who like it stronger) and 3 good Finnish bands, what else would a fan of the heavier music need to get warmed up properly for what is to come this Summer?

We arrived a tad bit too late to properly enjoy the first ever(!) gig by Merta, but what we managed to catch, sounded promising. A very catchy and infectious sounding brand of modern metal where the Finnish lyrics don’t even interfere with the accessibility of it towards non-Fins. The energy and passion of the band (especially the vocalist literally threw himself into the crowd) was clear from even the short bit we saw of their show. A band to keep your eyes on…

Second band of the night was the in this region quite well known symphonic/theatrical metal band Lost In Grey. To be honest, this kind of music has to be really really good to actually grab me and hold my attention for a whole gig. Musically it was pretty decent even though, compared to the recorded versions of the tracks, live it didn’t really come across as strong and epic. Keyboards/male vocals Harri stood at the front of the stage alongside the two female vocalists Anne and Emily. Of the three I really enjoyed Harri‘s growls and surprisingly warm sounding clean vocals and his stage presence was really great despite being stuck behind keyboards.

And while there were a couple of interesting moments where the three vocals really went well together and created a cool atmosphere, the vocals of the two girls didn’t really convince me properly. I don’t know if this was just a case of bad sound mixing, bad acoustics or just a bad night, but it just didn’t sound right to me. I thought it was also a pity that Emily picked up her violin for barely a minute of playing, I would’ve loved to hear more of that! For now the verdict from me is: really interesting music on record, live they need a redo when I happen to come across them again in the future, hopefully they convince me more then!

And to close the night, we geared up for Finland’s “most dangerous metal band”: Tyrantti! This so-called “leather metal” band is simply great fun! Last time I saw them open one of the Tuska days on the main stage, where they absolutely killed it and on this tiny stage they did exactly the same, if not more. This is a band you need to almost be able to touch, feel their sweat/spit/other fluids hit you in the face and bump fists with after banging your head alongside them!

I can’t say that their music is necessarily the most intricate or complex, but it’s a blast! As soon as “Nahka-Sami”, “Henkka” and “Paha-Tapio” mount the stage, they turn into heavy metal performance beasts that rip up everything they get in front of them. The fact that Crafters had saved up the very last barrel of Tyrantti‘s precious ‘Kobra 2’ beer only added to the enjoyment of both band (with Sami having a huge pint of their own beer with him on stage) and the crowd! This was a damn good Saturday night in Hyvinkää!