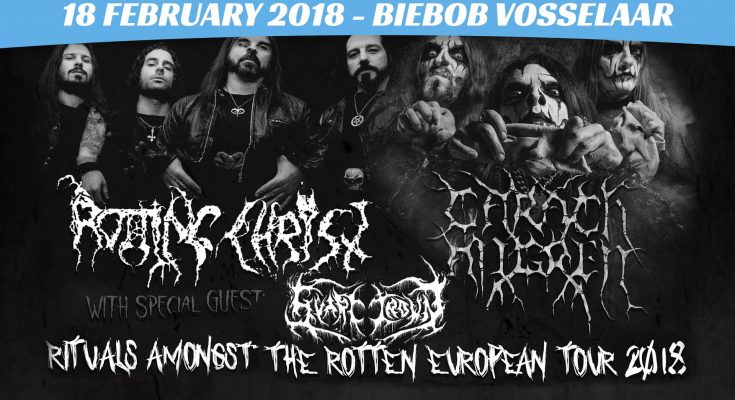 It promised to be a heavy night full of dark music in Biebob on February 18th with Svart Crown, Carach Angren and Rotting Christ. Being the last show on this non-stop 24 day Rituals Among The Rotten tour, we were curious if we would get to see an exhausted ensemble or fired up bands ready to throw everything they’ve got left at us for one last night!

Support for the evening was provided by Svart Crown (***1/2). The French black/death outfit steadily continues to build its fame as positive reviews stack up with each new album. Starting with the slow crushing ‘Lwas’, it was clear the focus of this show would lay mostly with their latest 2017 release of ‘Abreaction’. Even though it was still early on the evening, the band sought to connect with the crowd immediately. It was nice to see most people were happy to oblige with raised horns. 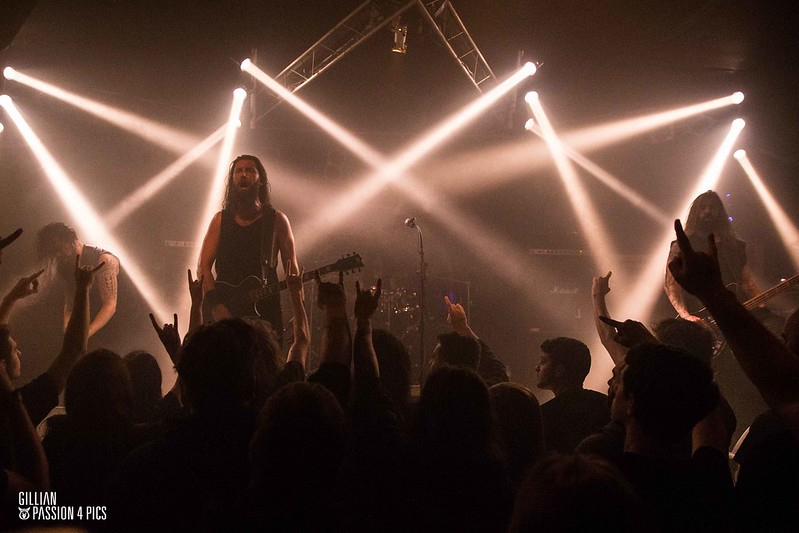 Svart Crown plays a bit of everything from slow impending black metal chords to up tempo, straight “in your face” death metal. Put differently, a very welcoming invitation to bang our heads from the beginning of the night. Melody is never too far away and Svart Crown incorporates the occasional guitar solo without ever feeling too obligatory. The band blends the long spun songs easily together without a moment of silence, avoiding them to lose momentum throughout the show. While the nine song setlist was just long enough for my liking, the band always kept my interest. Svart Crown is like a storm cloud rolling in from the distance. It holds the promise of something heavy and you keep watching hypnotized (while you realize you should hurry to the bar before the sold out Biebob floods). 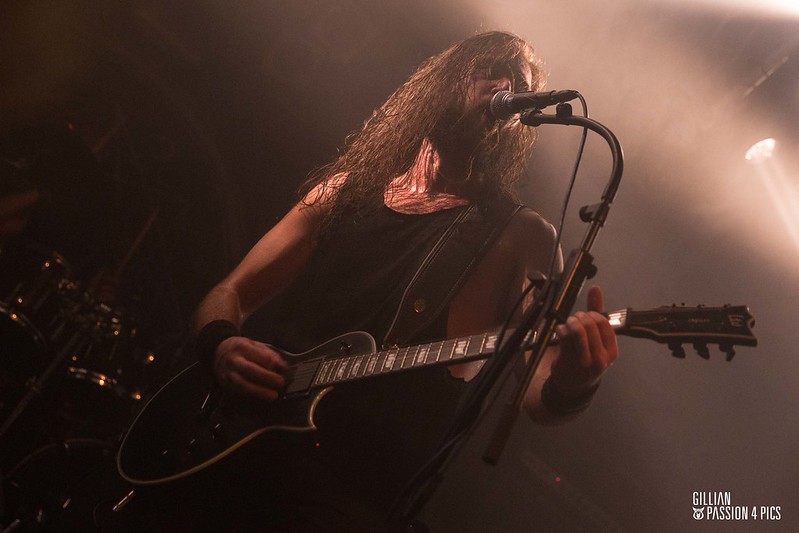 Surprisingly, there were no songs played in between the bands. Only some dark ambient tunes that seemed to build up to a storm. The perfect intro for the ghostly stories of Carach Angren (****). The projection of a ghost girl on a cabinet’s canvas greets the crowd. The insane faces we recognize from the drum skins greet us again as the musicians take the stage. Their meticulously drawn face paint betrays the eye for detail of Carach Angren. While a lot of groups experiment with a horror theme, this Dutch band steps it up a notch. “Imagine you’re twelve years old and you find the body of your dead mother floating in her own blood, her chest cut open vertically“. Vocalist Seregor sure knows how to set the atmosphere before introducing the next song. Hidden at first, slowly the keyboard rises from the stage, decorated with another expressive mask. 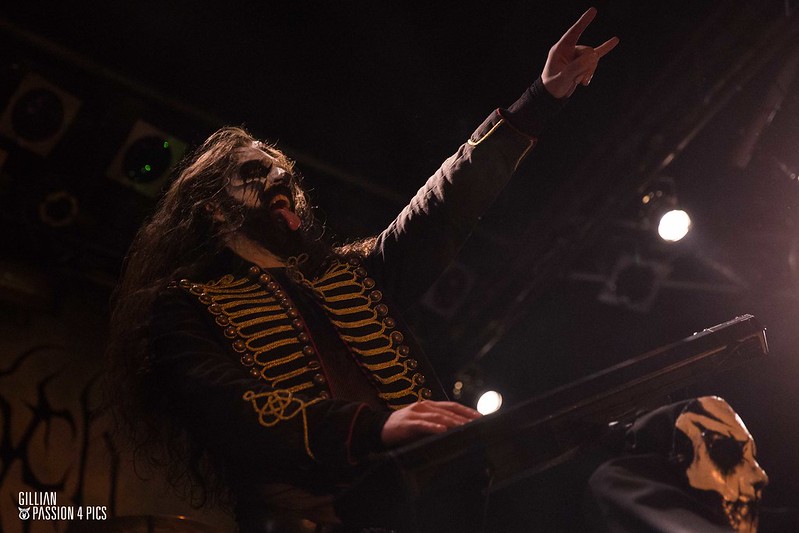 Intriguingly, it’s not the keyboard player that takes control of the keys, but rather the synths that seem to move around as it pleases while Ardek follows along like a puppet on a string. Beside playing at a high tempo the band members are real actors on stage, emphasizing every aspect of their act. Since passing on live guitar duties, vocalist Seregor has ample room to march and stride up and down the stage. Occasionally switching masks during the set the band continues to intrigue visually throughout the set. It still feels weird to suddenly hear Dutch Dutch screamed at us on stage while in Flanders, but language purists while definitely enjoy hearing more of our own language being used in metal music. Whether you are into their music or not, Carach Angren is a visual spectacle worth seeing live! 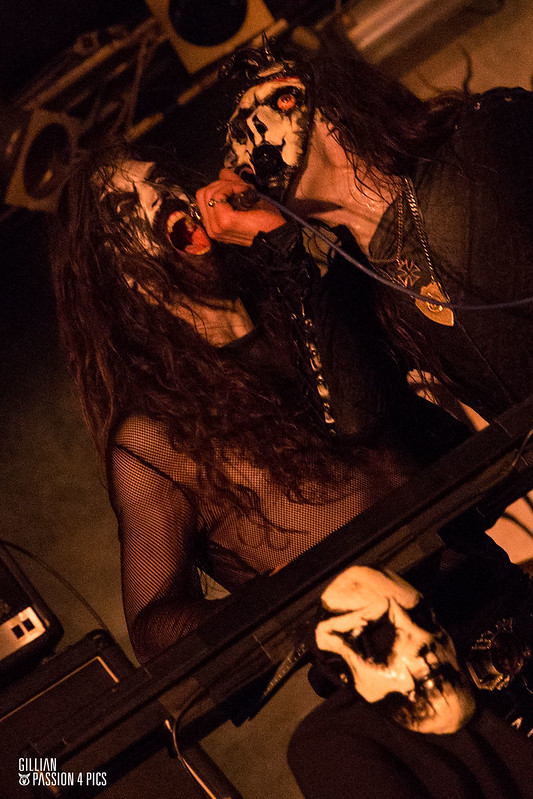 As befits a Greek band, Rotting Christ (****1/2) takes the stage fashionably late and the crowd that was squeezed all the way in the back of the sold out Biebob was growing restless. After a teasing build up with ‘Devadevam’ all registers were pulled open and ‘Katá ton Daímona Eautoú’ was unleashed on us. It was clear the crowd was waiting for this moment and frontman Sakis Tolis had no trouble instigating the crowd. 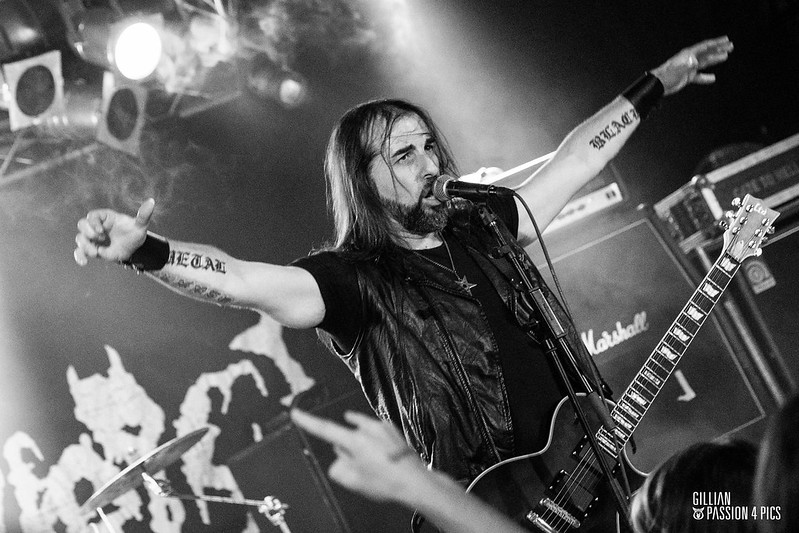 Unfortunately, it was not the band that showed signs of fatigue after the long tour, but rather the equipment as drummer Themis Tolis seemed to have troubles to get the samples started. With a career of over three decades this is not an issue that seems to stress out Rotting Christ anymore however, as they handled the situation like professionals. Rather, they pushed the gas pedal a little deeper and urged the crowd on to get the mosh pit going. The middle area of the already packed Biebob turned into a war zone as the Greeks evoked the old gods with ‘Elthe Kyrie’. ‘Apage Satana’ delivered a welcome break and proves how this band succeeds in transforming what most would consider a typical ‘album track’ into a mesmerizing live experience. 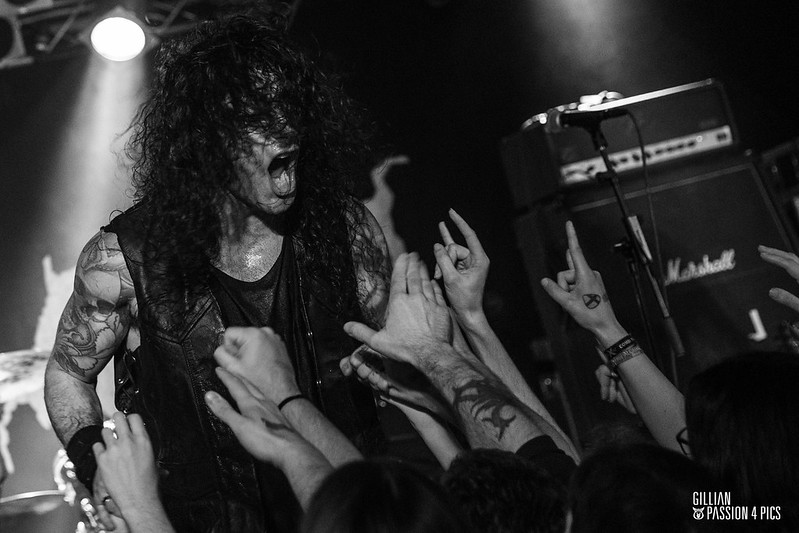 The interaction and build-up of the Tolis brothers on drums and vocals has become a personal favorite moment in their setlist. From this point on there are no limits anymore. The band takes us on a trip through their extensive musical catalogue, teasing us for the upcoming best of ‘Their Greatest Spells‘ double CD-compilation (out March 23 via Season of Mist). After the show the Greeks took ample time to greet and thank the fans and exchange new memories. 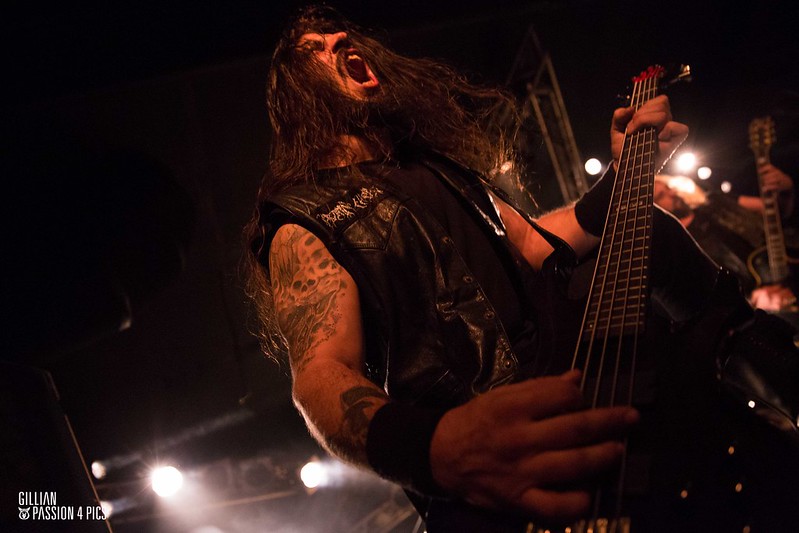 In conclusion, we can say this was a very successful line-up that did not show any sign of weariness after 24 days of non-stop touring! If you can’t get enough of Rotting Christ, be sure to keep your eyes open for our new column ‘Hallowed Be Thy Ink‘ as we managed to interview Sakis about his tattoos and get all the members of the band in line for a short photo shoot. Stay tuned! Also check out the full photo report of this night’s show by our house photographer Gillian!