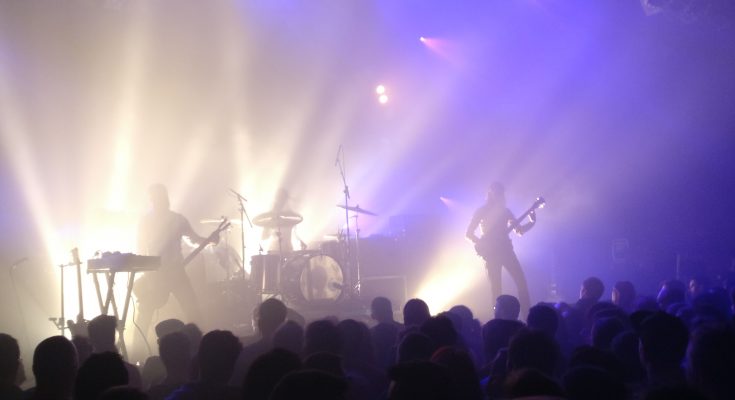 On Friday night the 17th of March, post rock fans from all across the country headed out to one of the most picturesque venues in Brussels: the Botanique. They had a very good reason to pay these old majestic garden halls a visit, as post rock legends Russian Circles were in town!

But let’s not get ahead of ourselves, we should first address the pretty decent performance of opening act Cloakroom (***1/2). As it turns out, just a few people had heard of this three piece band form Indiana before the show. Of course, they only started their career in 2012 (as opposed to 2004 for Russian Circles) and with just one full album on the market, they still have plenty of time to conquer hearts in post rock land. Cloakroom presents decent post rock with a little stoner and doom mingled in.  It was a very serene performance, mostly due to singer/guitarist Doyle Martin’s esoteric voice. Cloakroom put up a nice performance, but no more than that, honestly.  A truly cozy and quiescent warm up for the devastating intensity of Russian Circles.

Because if anything, the show Russian Circles (*****) put up was intense as fuck! Personally I was more familiar with their earlier work and thus was expecting a rather intimate, contemplative performance with a little groove here and there. The truth proved to be quite the opposite! The first half of the show was drenched in a raw, primitive and yet so sophisticated emotional energy we ‘d rather expect from post black metal acts such as Downfall of Gaia. It had a very intense and desperate touch to it. As wave after wave crashed into the (slightly overcrowded) audience, people got more and more sucked into the heat, the energy, the trance, the music. The density of the audience was a little uncomfortable, but on the other hand it created a sense of unity and surrender of individuality to the all absorbing atmosphere. Contrary to Cloakroom, Russian Circles are an instrumental band, but everyone could hear some unspoken screams somewhere deep inside themselves.

A word on the playlist: recent and new songs prevailed, and yet it was great to see how even the more calm songs from the early albums, like Harper Lewis and Youngblood, got to life and completely burst open on stage. Such a difference from the albums! Vorel, a song from their latest album Guidance, blew everyone away while Afrika and Mota carefully picked everyone up again. As the second half of the gig approached, the agonized riffs and groovy rhythms of post metal cleared the room for a more sober, intimate and sensitive post rock finale.

In conclusion, Russian Circles is a band with an unexpected capacity to not only touch your soul, but also put some goddamn groove in there. A band you simply must have seen, you won’t regret it! 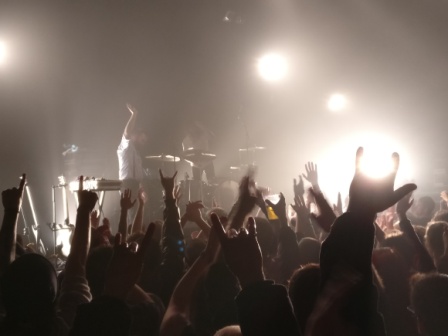