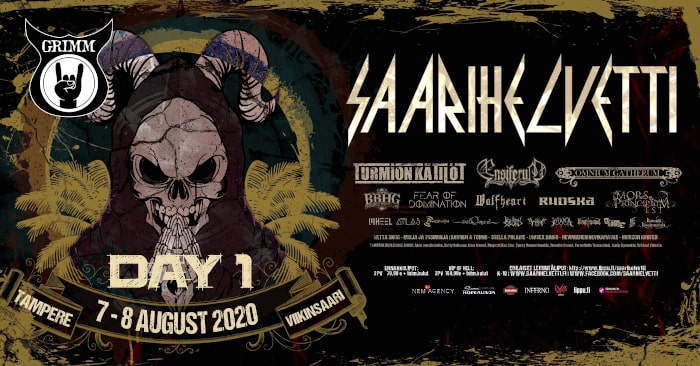 A festival during this crazy time of COVID-19 pandemic? Madness you say? I guess that’s an apt description of the festival that describes itself as the “Island of Hell” or SaariHelvetti. Taking place on the Viking Island in Tampere, Finland, this relatively small festival has become a staple in the Finnish festival Summer with usually some pretty big names in the metal scene, both international and national. This time around they were forced to have a “corona edition” with only Finnish artists, but what a line-up! Gathering the top of the Finnish scene complemented with some up-and-coming bands, it promised to be quite the weekend!

With the whole situation going on, we were a bit nervous on how things would be like at an event that was completely sold out and expected about 5000 visitors spread over two days. But overall, our experience was really pleasant. It was clear that the organization had thought things through really well and went beyond what people could expect to be able to offer an as safe as possible event. The boats to get to the island weren’t crammed full with people, a way higher amount of benches and tables than usual, proper toilets that wouldn’t force you too close to someone else and the move of the second stage (or Inferno Stage) from inside a building to be an outdoors stage. On top of that they gave every visitor a small bottle of hand sanitizer and a face mask before they got on the boat. In other words, they gave everyone the chance to keep their distance from other people and let the decision to go crazy in front of the stage in the hands of the visitors without trying to enforce distancing.

First band we caught was the heavy metal outfit Oceanhoarse. As to be expected, these guys ran on stage to bring 45 minutes of pure energy and heavy metal groove. Despite being straight in the full heat of the afternoon sun, all 4 of the members gave it their all until there probably wasn’t a spot on them that wasn’t soaked in sweat. The crowd that had already gathered with plenty in front of the Inferno stage, clearly really got into it and when they kicked off their cover of Slipknot’s “Duality”, things really got wild.

Melodic death metal outfit Bloodred Hourglass is a band that has been quickly on the rise since their latest release ‘Godsend’. That they’re a popular band, was quite clear from the crowd as soon as the band ran on stage. The first song ‘Alysia’ had barely started and there a pretty big moshpit developed already. The crowd was hungry for this due to the long break in concerts, but so were the guys of Bloodred Hourglass. They engaged into their music like rabid dogs and kicked some serious ass that early in the day!

The award for the heaviest sound of the day, or of the whole weekend for that matter, most definitely goes to Rotten Sound. The grindcore masters delivered a relentless pummeling with no regard for anyone’s weak hearts. Vocalist Keijo did not like the lowering sun blinding him, but as soon as the first notes of the next song hit the speakers he unleashed a maelstrom of brutality like no other. If we hadn’t gotten rid of the working week by now, Rotten Sound shook it right out of you.

Dammit! All tours of Rammstein canceled! Well, no worries. Because if you’re in Finland you can get somewhat of a replacement through Ruoska. Basically a Finnish version of the German industrial metal giants, they bring you the same stomping beats and riffs you’d expect from an act like that. Even their vocalist Patrik has an uncanny resemblance to Til Lindemann. Catchy Finnish lyrics, danceable metal, a vocalist that pulls out the craziest faces and a mohawked and kilted bassist running around the stage, it all takes the energy through the roof and quickly whipped the crowd into shape. Soon I found myself saying “Mies” along to one of their hits ‘Mies Yli Laidan’.

Time for another popular band within (and outside) Finland! On the Inferno stage, the heavily folk/pagan infused symphonic and melodic death metal outfit Brymir set up shop and proved to be the perfect warm-up band for headliner Ensiferum. Opening with the damn epic ‘Gloria in Regum’, from their latest album ‘Wings of Fire’, the tone was immediately set and the equally powerful ‘Ride On, Spirit!’ made the party explode even more. Oh, how we all have missed live shows like this!

It’s been quite a while since I last managed to catch Ensiferum live. And I’m pretty sure with the recent release of ‘Thalassic‘, there were quite a few people alongside me looking forward to seeing them on a stage. They kicked off the show with high energy through the main singles of that release: ‘Rum Women Victory’ and ‘Andromeda’. And I have to say that it doesn’t matter if you didn’t like those tracks or even the whole new album, live these songs are Ensiferum to the teeth and simply belong perfectly in between the rest of their catalogue. Sami, Petri and Markus were their happy and energetic self and the addition of Pekka on keyboards and (power metal) vocals simply brings another dimension to their stage presence. They kept the partying crowd going with a mix of more recent tracks like ‘From Afar’ and ‘In My Sword I Trust‘, the golden oldie ‘Lai Lai Hei‘ and a couple of brand new ones like ‘The Defence of Sampo’, ‘One With The Sea‘ and the epic ‘Cold Northland’. Secretly I was hoping to get to hear ‘Midsummer Magic‘ because it’s such a damn fun song, but I guess that’ll be for another time…

After Ensiferum wrapped up their set, it seemed like most people were ready to move the party back to the Tampere shore. But I couldn’t let the chance to see Wheel live again pass me by. At the moment I’ve seen them plenty of times, but they never fail to impress me. On the smaller Inferno stage they created a mesmerizing atmosphere that enthralled anyone who decided to stick around for a bit. With the looming darkness, smoke and stage lighting coming mostly from behind them, the dark figures cranked out their proggy and groove music like there was no tomorrow. Before we realized it, the hour was over and we had to make the long trip back to the shore. It was a pleasure seeing you again and will be looking forward to the next meet. Keep it Wheel!

For more pictures of the first day of SaariHelvetti 2020, go here.