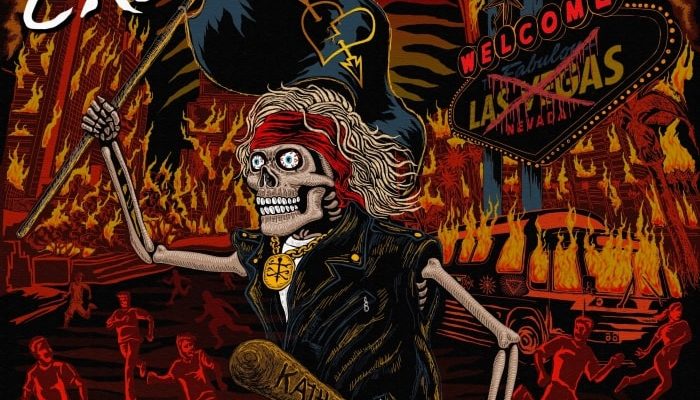 Hard rock band Santa Cruz is back with a new line-up consisting of:

‘Katharsis’ addresses Archie‘s journey to rebuild Santa Cruz. The album cover is pretty funny. It shows us a skeleton running with a flag and a bat in a burning Las Vegas. I can’t really say if this cover makes any sense, but let’s find how the “new” Santa Cruz sounds.

‘Katharsis’ begins with the song ‘Changing Of Seasons’ and it’s immediately clear that not only the line-up, but also the sound has changed. Santa Cruz has clearly made use of technological musical gadgets, which is very popular with young people today. It also strikes me that Archie has a soft, slightly rough voice.

In my opinion, Archie‘s voice sounds a bit too soft for a hard rock album, but in songs like ‘True Believer’ and ‘It Was You’ there’s a lot more expression in his voice. Unfortunately I also noticed that effects have been added to his voice in all songs.

I was glad to hear songs like ‘I Want You To Mean It’ and ‘Salvation’, because there are some nice guitar works in there. In the latter it is striking that the music surpasses his voice, which leads me to a possible reason why it is not fully expressed on ‘Katharsis’.

In general, it’s a varied album with songs at different speeds, but it also sounds a lot more commercial than it used to be. After hearing ‘Katharsis’ I’d say Santa Cruz relegated from hard rock band to rock band. I think loyal fans might not like the sound of this new album, but I think there’s a new, maybe even younger, audience for this new sound of Santa Cruz.