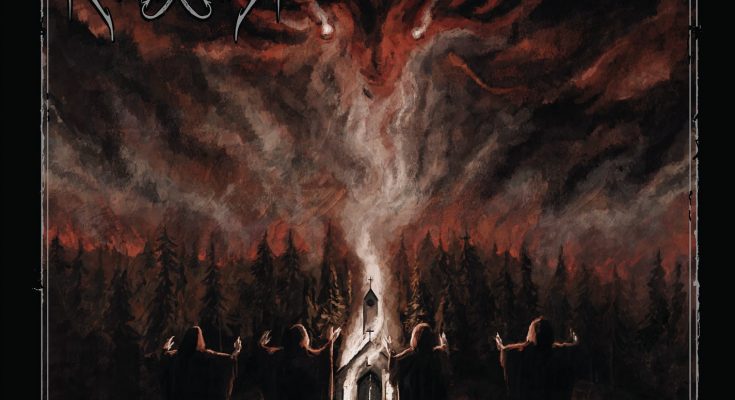 Sarkrista is a German black metal band that became known for carrying Scandinavian influences. Formed in 2011 the band debuted its first full-length album “The Acheronian Worship” in 2013, which was followed by several split albums with bands such as Sielunvihollinen and Unhuman Disease. While taking long gaps between each official release, their second full-length album “Summoners of the Serpents Wrath” came out four years later. Only to set up the trademark sound of the Finnish black metal whereby they created a niche for themselves. Although their music seems to be focused on mid-paced tempos the guitars provide a chilling atmosphere to the music. After crossing the berries of normalcy, the duo Revenant (guitars, vocals) and Exesor (bass guitar, drums) have notably forged ahead to explore their own sound.

Their third studio album “Sworn to Profound Heresy” was released on March 21st, 2021 via Purity Through Fire. Sarkrista aptly takes hold of the melancholic and traditional style of the Finnish black metal. The songs are imbued in the orthodoxy of Satanism that is preserved and carved deep into their hearts. The duo weaves together a sensational devotion to the left-hand path with this profound theme of loyalty presented in the album’s intro the dark orchestral theme beautifully segues to the album title track. The broader spectrum of the chilling tremolos perfectly contrasts with the blazing riffs and the sharp screeching vocals of Revenant. Throughout its time run of forty-eight minutes, the guitars emit warm melodies that are conveyed by powerful rhythm guitar.

“Lair of Cursed Remains” combines sharp-driven melodies and deep tremolo reverberation. The focused songwriting feels elevated and broadens to combine the heaviness of the guitars where the songs come in the full circle of the defining quality. Although one could make a clear comparison to the band Sargeist for the use of the same components, Sarkrista presents the traditional palette of tremolo-picked riffs and blast beats. A track like “Ablazing Ritual Torches” proves the faculty of the lead guitars, with the rapid pace of the drums the melodic tremolos marvelously textured. “Sworn to Profound Heresy” settles mostly in the mid-pacing tempo each track almost begins with a tremendous drum pacing and it’s followed by grim vocals. Whilst the rhythm guitar constantly provides a chilling atmosphere the melodies display high quality. Other prominent features of the album are the guest appearances of Lord Lokhraed from Nocturnal Depression on “The Chosen ones of Satan“.

The overflowing burst of scathing melodies is strikingly inserted here and the riffs are played at breakneck speed. Sarkrista offers an overwhelming performance while the melancholic elements are omnipresent, the band somehow cements its signature sound. Another highlight of the album is the clear production that enhances the furious intensity of the eight tracks. “Sworn to Profound Heresy” offers a slew of classic melodies that are only known to those who have a clear ability to extinguish the fundamental principles of the Finnish black metal. On the musical level, Sarkrista continues to expand on the melodic landscape without sacrificing the main elements.

After going through the aforementioned tracks, the duo shows an intelligent approach that was never uncovered in their early works. “Destroyer of the Sun” is experimental and simultaneously twisted as it blends the melodic chords and groove in one slow gripping tempo. With the guest vocals of The Infidel from Curse upon a Prayer providing diversified vocal textures the lead guitars bring a good mixture that fits well with the melodies. “The Beast Reborn” comes falling like a destructive avalanche of the blast beats, the track combines the freezing atmosphere of the rhythm guitars.

Even though the tracks clock over the average run time, the duo creates an amp full space into which the listener can conjure dark malevolent feelings. The final track “A Whisper from Forgotten Coffins” is quite experimental as it introduces new ingredients and dynamics to the song. Expect to hear some sweeping riffs and twisted melodies. Overall “Sworn to Profound Heresy” doesn’t differ much from the sophomore but at the same time, the band seemed to be pushing new experimental traits beyond their sonic boundaries which may change their musical direction.