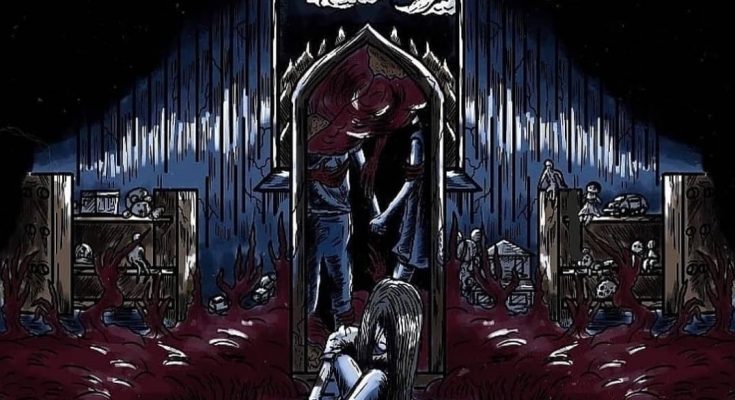 Hold on to your socks ladies and gents because they’re about to get blown off. Bursting into the dark rock scene, Sharone brings her unique sound and vulnerability to show everyone what she’s capable of. Here’s the thing, she’s just beginning. She’s got a long journey ahead of her, in the best way! I personally believe she will be able to break down many walls and pave her wave to success. If you haven’t had the experience of listening to her music yet, get on it! It’s been said that her music is “…packed with dark fairytales and swooping riffs as well as more theatrical invention that you’d find at the Royal Shakespeare Company.” (The Crack Magazine) You don’t want to miss this!

What first caught my attention when it came to Sharone was her aesthetic. I’m all for the darker looks, and let me tell you what, do not judge a book by its cover! I was expecting to hear a lot of screams and intense vocals, but I was surprised in a very, very good way. She’s able to pull off a dark look while having a voice that could make the most intense lyrics, soothing yet haunting. I cannot wait to hear what else she comes out with because I am a FAN.

Before I listened to “Morbid Illusion” I wasn’t sure what to think. After hearing just one song, I knew I was going to love what she put out! “Morbid Illusion” takes you on a journey of being held down by toxicity and feeling like you need to fit someone else’s preconceived notion of what you should while you’re feeling like you’re drowning with no way out, to being able to overcome obstacles that were faced no matter how much it hurts and being resilient in the end not letting anyone see you crack under pressure. Although, no one comes out perfectly clean, unfortunately.

To me, I like to be able to relate to music in one way or the other and although Sharone writes about her own personal experiences, she writes them in a way that anyone can relate to, even if it’s not just personal relationships. The fact that she can capture emotions so well in her music is pure talent, rather than just writing what she thinks others would want to hear. Another huge thing for me is being able to see the action of the lyrics play out in my mind, while listening to the music. Almost like a mini-movie! It’s easy to listen to this music and picture it as you listen, well done!

The musical aspect of this album is so full as well! You’ve got the sick guitar riffs, heavy bass and a bunch of varying rhythms throughout the album as well as piano. I was taken aback by how well everything fit together! One of the songs I found most interesting when it came to rhythm and tempo was “Left In The Dark”. I can’t say I’ve heard anything quite like it. It starts out steady, then speeds up and as it gets to the chorus it slows back down to then go back into the original pace. The unique sound to this album is going to be a huge positive for Sharone and I think it’s going to help thrust her into success, making people want to come back for even more!

Another huge positive is the vocals, Sharone‘s vocals aren’t the typical raspy rock n roll vocals. Her vocals are untarnished and in some cases, higher than I thought she could go. While some high voices can sound forced she pulls it off what sounds to me like effortlessly. They’re smooth throughout, even when things are switched up and the speed changes. Vocals play a great role in music when it comes to easy listening and they’re captured perfectly for rocking out, or just chilling and listening.

Sharone first started preforming in Denver, Colorado in 2014 playing in smaller venues but has since grown to open for acts such as Stitched Up Heart, Puddle of Mudd and Saving Abel. While preforming she likes to kick it up a notch and make her show memorable, and she does just that. In my interview with Sharone she told me she gets her inspiration for theatrical sets from In This Moment‘s performances and stage sets.

While her stage set inspiration comes from In This Moment, she credits Evanescence for initially inspiring her to get into the music scene. But even though she gets her inspiration from current bands, she manages to put a thrilling spin on her creations. In 2020 she signed with Devil Inside Records and shortly after released “Can We Pretend” which was quick to become her most successful release. Other successful singles she released are “Diamonds” and “Screaming Into Oblivion“. Two of my personal favorites off of “Morbid Illusion” are “Pinup Doll” and “Dying Out”. I’ve been there and have felt that, all too familiar.

And when it comes to motivation for song writing Sharone certainly didn’t hold back when reaching inside herself to pull out experiences to put into words. As a result, this whole album is made up of songs that show vulnerability and bravery after overcoming situations that were not so ideal. You can hear the emotion in the vocals. If you ask me, albums like this are what come from a true artist!