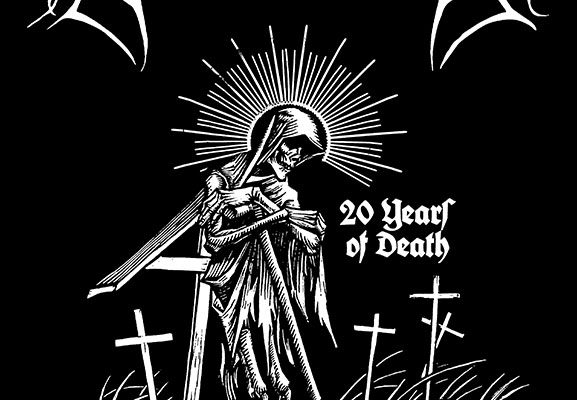 Wednesday December 7th, promised to be even darker than a usual cold winter evening. It was an evening I was looking forward to for months, since some cornerstone black metal bands would drown us in misery at De Verlichte Geest in Roeselare. With two Norwegian bands in the form of Slegest and Taake, completed with the Swedish titans of Shining, we were sure to get in for a treat – a wicked one. Shining celebrates its 20 years of miserable existence during this tour. To top it off, they recorded each and every show, in order to put out their first live album this year.  Upon arrival, there was already quite a row of people waiting to get in, since the show was completely sold out. Who would want to miss these bands in a small pub anyway?

First on was Slegest. Contradictory to the queue outside before the gig, De Verlichte Geest seems quite empty during this show and crowd response was minimal. Nevertheless, frontman Ese (ex-Vreid) showed a lot of enthusiasm, screaming his lungs out, and generally being very active on stage. Slegest recently put out their latest effort, Vidsyn, so it’s no surprise most of the setlist came straight from this second full length. Musically, Slegest blends Darkthrone-esque black metal with a lot of heavy metal influences, topped of by a doomy atmosphere. It takes some time to get used to it on album (and in the end I enjoyed it thoroughly), but in a live setting it didn’t really work for me. A good show, but that’s about it.

It was quite obvious a lot of people ignored the presence of Slegest, as it turned out the pub was packed to the fullest when black metal household band Taake took the stage. Singer Hoest has always been a controversial figure, and this night he was surely living up to his reputation. Sporting a shirt with a crossed-through Islamic symbol isn’t the least of statements he could make in these times. Contradictory to the swastika he once painted on his chest, this wasn’t for show, as he told me afterwards. Luckily he didn’t rant about it during the show, as we all were there for music instead of political statements. And music we got! Presenting us with songs from all over his catalogue, Taake played a sort of ‘best of’ set.

It’s crystal clear that Taake is a well-oiled machine: instrumentally the band was flawless, and the vibe they create had many people nodding their heads from the first notes. Hoest was quite calm on stage, but charismatic as always. Next to the ‘best of’ set, he had some surprises on his sleeve. On Du Ville Ville Vestland we got a guest performance of Niklas Kvarforth, whereas Ese from Slegest took on vocal duties on Fra Vadested Til Vaandesmed. But that’s not all, since they played the song Myr, too. ‘What’s the point?’, I hear you ask. Well, they played the banjo live. They fucking did it, and it was flawless! Whereas the label ‘experimental’ is used way too much nowadays, it’s totally fitting in this occasion. Taake came, played their 40 minute set and left us, wanting more. Below, you can watch some footage of their gig.

Shining on the other hand played an hour and a half. Niklas Kvarforth had some things to celebrate this evening. First of all, 2016 marked 20 years of Shining. 20 years of total (self-)destruction, writing disturbing music (9 albums already!) and performing like a madman, that’s quite an achievement. Second, the head of the band celebrated his birthday. How he reached 33 is a question that will go unanswered, it’s almost miraculous. All this (and beer) made sure Kvarforth was on top of his game. After his obligatory self-wounding, he and the band mounted the stage. What we got was disturbing at times, intimate, cathartic and above all, class musicianship.

Those of you not familiar with Shining: their music is heavy, dark and utterly depressing. Whereas some bands allow a little beam of hope to shine through their music, Shining is pure darkness. What Kvarforth writes in his frenzy is destructive, yet awfully compelling and melodic music. Again, we were given a ‘best of’, consisting of songs of almost all albums. Starting off with Vilja & Dröm, we knew we were in for a treat. The crowd, who had been warmed up by the previous bands, transformed in a whirlwind of headbanging. Shining played tight and Kvarforth‘s voice was OK – he had been suffering from a heavy flu over the past several tour dates and even had to vomit on stage during his show in the Netherlands.

Next to their own material, they played a Seigmen cover, Ohm (Sommar Med Siv). When the last notes faded, the audience was instructed to be quiet. Kvarforth introduced a drum solo to honour Trondr Nefas, the deceased Urgehal frontman. Some guy in the back screamed through his explanation, almost leading Kvarforth to rage. Luckily, instead he took some girl’s wine, calmed down, and went straight back to business. Låt Oss Ta Allt Från Varandra, Submit to Self-Destruction and For the Gods Below were executed splendidly, providing absolute highlights of the evening. Crowd went crazy – as did the band, headbanging furiously while their singer once again used his knife. This was a Shining spectacle as we’re used to, but the experience was much more intense since the gig was held in a small pub, allowing more intimacy and interaction between crowd and band. Surely, this night will be remembered for a long time by those attendant.