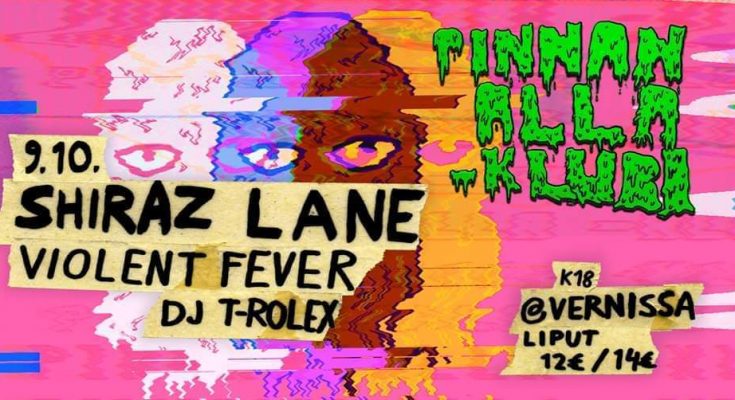 Every year I usually have a couple of times that I catch my buddies from Shiraz Lane live. This year, just when I was about to see them again on the Tavastia stage, the lock-down started to happen in Finland back in March and thus the gig never happened. So when they announced to be playing at a small venue in a town nearby, I knew I had to go and get my Shiraz Lane fix…

First up, were the locals of Violent Fever bringing their blend of catchy hard rock, post-grunge and a touch of heavy metal. It’s pretty obvious why these guys are steadily getting more popular. It’s one of those bands where as good as every single member radiates rock ‘n’ roll and brings a certain energy to the stage that keeps you sucked into their show. It’ll make you nod your head, it’ll make you dance (which quite some people did by the end of the show), it’ll make you feel good. And they even manage to keep your attention when they take things calmer and more emotional for a moment. A very promising young rock band that can be added among the ranks alongside quality Finnish bands like Shiraz Lane, Dirt, Block Buster and so on!

When the first tunes of their intro track started playing, I almost got trampled by a small herd of fan girls that were rushing forward to get right at the stage. The only proof you need to see how popular Shiraz Lane has gotten in the mean while. For them it was also sort of a hometown show and just like us all, the band obviously had missed being anywhere near a stage. With the usual boundless Shiraz Lane energy, the guys jumped, ran and danced around to the tunes of their catchy rock music and so did everyone in front of the stage. It was good to hear classics like “Harder To Breath” and “Mental Slavery” live again. Or then my personal favorite “Reincarnation” that still is a masterful display of how much talent these guys have. At some point they ended up playing a Van Halen song dedicated to the recently passed Eddie Van Halen, which made the crowd go wild just that little bit more. It was good to see these guys on stage again, one can only hope and look forward to when things can get back to normal for shows.

For more pics, go have a look at the photo report here.