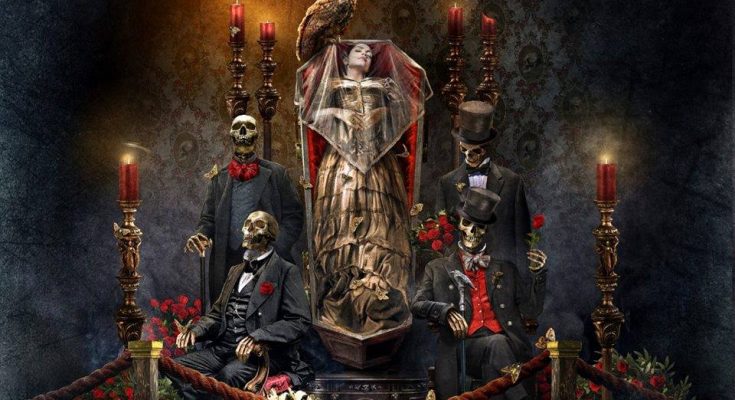 Everyone who’s just the slightest bit into gothic metal knows Morten Veland and his musical mastermind. Until 2001 he defined the gothic metal sound with the famed Tristania. When he left the band he started his own project Sirenia. Now, eight albums and five singers later, Sirenia is ready to release Dim Days of Dolor. According to their Facebookpage this release marks a new direction for the band. It is the first album with the French mezzo soprano Emmanuelle Zoldan on lead vocals. The collaboration between the band and her goes back 13 years. From the second Sirenia album on she has been a part of the ‘sirenian choir’, Sirenia’s backing choir. You might also know her for her work with Turisas and Trail of Tears. With Dim Days of Dolor the band returns to a sound that reminds me of the early Sirenia days or even Tristania. This album most certainly differs from the releases with their former singer Ailyn. The new sound is heavier, more bombastic, less feigned and less poppish.  A step into the right direction if you ask me.

Dim Days of Dolor opens with Goddess of the Sea. You’ll soon get an idea what the rest of the album will sound like. The main role will clearly be played be the sirenian choir and Emmanuelle’s deep, dark, dramatic voice. She immediately makes a strong impression by hitting high notes and showing off her technical skills. The other instruments overwhelm like the waving sea. Sirenia recently released a snippet from the second song from the album which is also the title track. Dim Days of Dolor is probably the most catchy song on this record. No wonder the band has been shooting a video for this track, that will soon be released. Emmanuelle is accompanied during the verse by session musician and vocalist Joakim Næss. Their voices match pretty well. Song number three, The 12th Hour was released as a lyric video. It was the first song I heard from this album and I was pretty close to not giving the album a chance. Nothing wrong with the song. It’s one of the best Dim Days of Dolor has to offer. It’s versatile, has a threatening atmosphere and a great chorus. Morten shines through his harsh vocals. But those lyrics. Ugh. Hard to believe that Morten once wrote true poetic verses for Tristania and now comes up with the most superficial and cheesy lines. They undermine the quality of the song, which is a pity because it could have been so much more powerful. Come on dude, I know you can do better. Speaking of comparatives and superlatives, the heaviest verse of the album definitely goes to Cloud Nine. Dramatic choirs and a creepy keyboard intermezzo melt into a mean death metal guitar solo.

Song number six is also well performed. Veil of Winter contains again a duet between Emannuelle and Joakim. Joakim has a sunny and warm voice that breaks with the heavy atmosphere the album often evokes. These ‘lighter’ elements are a necessity between the dramatic vocals and melancholic rhytms. A special mention goes to the track Playing with Fire. The dominant elements here are a groovy guitar riff and a slow yet catchy chorus. In the verse you get surprised by Emmanuelle whispering in her mother tongue, French. Quite interesting to hear, it certainly brings a moment of tranquility. Dim Days of Dolor’s final song is also one of the calmer kind. Aeon’s Embrace is a sober, melancholic piano ballad. It greatly differs from the rest of the album because of its lack of bombastic choirs and heavy guitars. Less is more in this case.

And that’s what my final conclusion for Dim Days of Dolor will be. Sirenia is definitely back on the gothic metal track that they were loved for. Big step forward from the Sirenia that we knew the last couple of years. I will not deny that the band wasn’t successful then, but I had the feeling they became just one of the oh so many soulless gothic/symphonic metal bands that we have these days. With Dim Days of Dolor they rediscovered the sound that made them unique. There are undoubtedly some high quality gothic/symphonic metal songs on this album, especially in the first half, but there is room for improvement. As I mentioned before, the album generally has a heavy atmosphere to it. The choirs, orchestra, operatic lead vocals and heavy guitars often feel like ’too much’. Adding some brighter elements such as acoustic parts, keyboard solos or airy clean vocals might create some contrasts. This is a more than decent album within the genre, but I feel like they can do better and reach the extraordinary level from their first two albums in the future. If you cannot wait that long, make sure to check them out at De Verlichte Geest in Roeselare at the 25th of November! 68/100