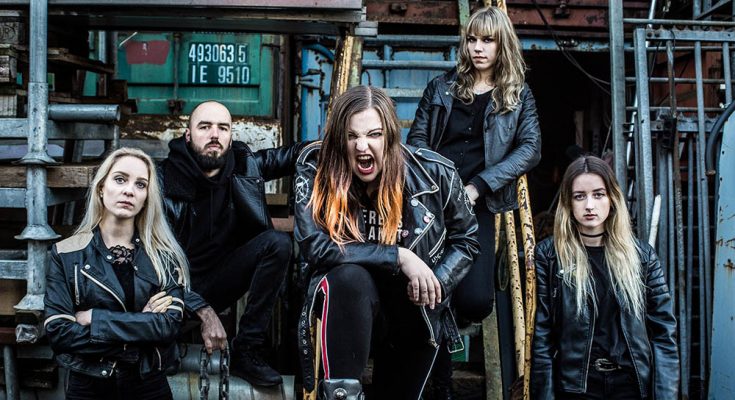 Whenever the devil makes you a deal seemingly for free, you should know it’s only just a trick. Because everything has a price. So when I was offered an opportunity to interview Sisters of Suffocation at The Little Devil, I should have known better. Heading out fully prepared, leaving almost 3 full hours before the scheduled interview on a trip that should take no longer than 1 and a half hours, I got stuck in all possible traffic jams and red lights. By the time I finally arrived in Tilburg, I was already a few minutes late. To try and minimize the damage, I ran all the way from the parking garage to the venue, only to be wheezing and coughing for an hour, feeling an urgent need to use an inhaler which I left at home. It was at this moment, I realized that when you make a deal with (or in this case at) the Devil, no matter its size, you can use it later to create a short anecdote about your unfortunate travelling experience for your article.

After arriving at The Little Devil and apologizing for the delay, I spoke with Els Prins (vocals), Simone van Straten (guitar) and Emmelie Herwegh (guitar).

Besides Sisters of Suffocation, what else do you do?
Simone: I teach guitar lessons 4 days a week. And I also teach sports for the heck of it.
Els: I study Communication, fulltime. I’m currently in my second year.
Emmelie: I study Guitar at the Metal Factory in Eindhoven. I’m currently in my third year. Besides that, I also do photography.

Are there any techniques or preferences you use a lot?
Simone: Downstroking!
Emmelie: We do use that the most, yeah
Simone: Yeah, downstroking and strumming those triplets.
Emmelie: Most of what Simone and me play have a similar technique behind it. Of course we have our individual music pieces, but when it comes to techniques, it’s often very similar.
Els: For me; not really… I’m not that much into techniques. It might sound a little lazy, but I just do what feels right to me. And I mostly do a lot of guttural vocals because I like those the most. Within my own career but also when listening to other bands.

Have you ever thought about pursuing a specific clothing style as a band?
Simone: Not consciously. The furthest we go with that is that we all wear band shirts and communicate it to the others so that it never happens that two or more people end up wearing shirts of the same band.
Emmelie: Like Simone said, and we usually just wear what we like the most. It’s not like we go “Oh, we have to perform tonight, so we’ll have to wear this specific kind of outfit”.
Els: In death metal it’s not really a thing to use elaborate outfits. You just put on a band shirt and play a show, especially with old-school death metal, so we didn’t want elaborate outfits either and just be ourselves instead.

So this is your last release show, right?
Simone, Els and Emmelie in unison: second-last.

Second-last, okay! And how did the shows go up until now?
Simone: Fuuuuun, hahaha
Els: Yeah, it was a lot of fun.

Crowded too?
Simone: Yeah, especially the first two. And today as well, by the looks of it.
Els: It varies.
Emmelie: Especially the one in Amsterdam was crowded. We hadn’t been there before.

Have you already looked up reviews of the new album? Or are you not that obsessed with reviews?
Simone: I don’t specifically look for them, but you scroll past a few during the day, and so far I’m quite content with the reviews I’ve seen so far.
Emmelie: They’re all very positive, high grades, so we’re happy.
Els: I read a lot of the reviews I come across and so far it’s been mostly positive. And often it’s also written by people who’ve also given reviews on previous albums. They say we’ve grown up a lot more and stuff like that. I can relate to most of it too.

Have any reviews lead to any kind of inspiration, hints or tips to keep in mind for a next album?
Els: I don’t think reviews lead to inspiration for us.
Simone: Reviews to us are more like a thing to read looking back at an album. It’s nice to know how people felt about an album, but that’s about it.
Emmelie: Yeah, it’s nice to know when people liked it, but if they didn’t, that’s okay too.

Any milestones you want to achieve in the upcoming years?
Els: A world tour!
Emmelie: To start, simply “a” tour would be great.
Els: Yeah, okay, start with simply any kind of tour, and then on to a world tour.

How far and wide does your musical horizon spread? Are you just focused on Sisters of Suffocation, or have you also considered expanding towards film and game music for example?
Simone: Speaking for just myself, with teaching guitar lessons, I come across a lot of things. So I like a lot of things. With the band, of course I’ll play a lot of death metal, but outside of that, a lot of things.
Els: Besides Sisters of Suffocation I also play in a progressive metal band, and I also play a bit of pop-ish music together with Simone, so there’s a lot of things I like and try to do.
Emmelie: Besides playing in the band, I also really like trash metal, so I also play that a lot, and besides that I also used to play a lot on the acoustic guitar. And occasionally I still like to play and sing along to pop songs.

Looking at the production of the album, Simone recorded both Emmelie’s and her own guitar track. Did Emmelie still have a role for the input of the tracks?
Simone: Well, for this record that was kind of difficult, because we didn’t have a lot of time to get everything done. So I wrote most of it at home rather quickly, especially the guitars, and sent it over to the others. Els then put her vocals on it and Kevin rewrote his drums and then we pretty much immediately went to record it. So there wasn’t much time to incorporate Emmelie into the process this time around.
Els: Besides that, Emmelie had pretty much only just joined the band.
Emmelie: Yeah, and most of my time went into the live set for MetalDays and into rehearsing for the first few shows, so working on the new album wasn’t really an option at that point due to time constraints.

How difficult was it to adjust to the riffs and such that Simone has essentially written for you?
Emmelie: In the beginning it was rather new to me, also because I’m more familiar with thrash metal, but I think I was able to get on top of it quite quickly. Also because I spent a lot of time with Simone to go through everything.
Els: She worked really hard on it. We’re very happy to have her, right Simone?
Simone: Yes, definitely.
Els: She’s grown a lot as a guitarist compared to where she was a few years ago during her first audition.

Lastly, a question for Kevin (Emmelie went to fetch Kevin): Have you ever experienced any awkward moments due to the name of the band?
Kevin: For me personally; no. I’ve never really had an issue with it. I can imagine that not all fans are happy with it though, but I try my best.
Emmelie: I’d like to add to that; I think that for most fans it isn’t an issue either. It’s mostly just the people that already don’t like our band anyways. It gives them another reason to dislike us.
Els: Moreover, when I asked Kevin if he wanted to become a permanent member of the band, I specifically asked him if he had an issue with our band name. And Kevin always said “Of course not. That doesn’t matter at all to me”.
Kevin: And Els even asked Napalm to confirm if it was okay for us to bring a male member into the band with its current name, and Napalm responded by saying “quality above everything”.
Els: They already thought it to be unnecessary of us to even ask them that. They couldn’t care less if we had the spot filled by a man or woman or whatever. Their biggest concern was that we’d produce a good album and that they could release it. There’s just always people that like to complain, but those people also did that before Kevin joined, so it doesn’t really raise an eyebrow.

And with that, we concluded the interview. Changing Tides played that night as the opening band. And even though they were one guitarist short, they still put on quite a performance. After they finished getting the crowd ready, it was the Sisters of Suffocation’s turn. With a setlist containing at least 9 songs from the new album and a few songs from earlier releases, they sure put on  a memorable show. Oh, and the Little Devil’s little deal apparently wasn’t concluded yet, as I realized on my way back to the parking garage that I completely forgot to take note of where the pedestrian entrance back into the garage was and spent so long looking for it, my phone’s health app notified me that it had registered a workout. I guess that’s what you get when you rush your way to the Devil without looking back.