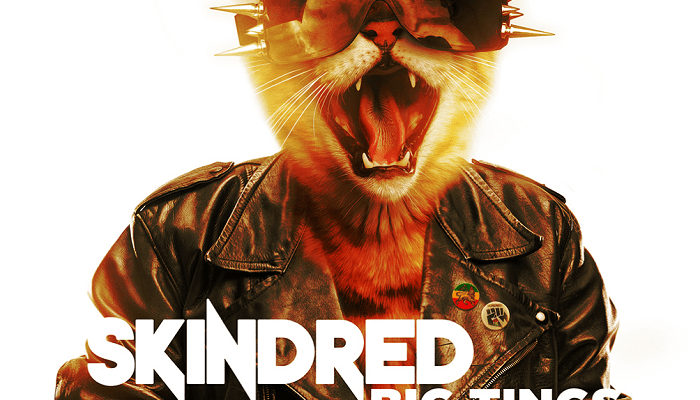 The metal scene is filled today with a lot of bands that do not differ a lot from each other, nevertheless if you dare to look further you can find some rough diamonds who just give a big fuck you to all hypes and just do their own stuff. Skindred can be put in the last segment. These genre-bending  Welshmen are bringing a mix of rock, metal, punk and reggae with grooves your body just cannot resist to also known as ragga rock. Big Tings is already their 7th album. Let start the engines. 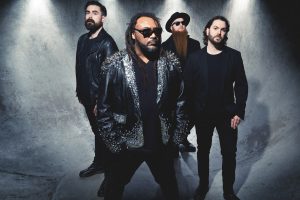 Skindred was formed way back in 1998 , so we could say it’s their 20th anniversary, man we are getting old. The pioneers are kicking off with the title track Big Tings which brings us in the beginning some nice calm grooves and a catchy melody , after the first chorus my body was already shaking. That’s my jam continues with the same ingredients added with some very catchy cheerleader chants, and on top of that the typical reggae chants from the charismatic frontman Benji . I wonder if they will bring along these cheerleaders on stage, that would be nice.

Machine is more a rock ‘n roll song which sounds very modern, not like some heavy metal bands are bringing us. This song features  vocals by Gary Stringer of Reef and guitars by Phil Campbell of Motörhead. The track was so beloved by ex-AC/DC vocalist Brian Johnson that he actually nabbed it as an intro and outro theme to his TV show, Cars That Rock.

Hey, the cheerleaders are back on Last Chance . This songs reminds me a bit of Faith No More but without Mike Patton‘s excellent voice. There’s also a rapping part in this one. And we are not done with the cheerleading stuff. On the noise rocker Loud and Clear they are shaking their poms again, it’s a very catchy song with some nicely added small things like the ‘whoop whoop’ stuff in between. Another song worth mentioning is the funktastic grooves of Broken Glass.

Skindred brings with Big Tings a very groovy album with some experimental stuff added which results in even more commercial poppy sounding tunes. You have to give them credit that they just do what they want aside of all hypes today in the metal scene. For our music trivia:  Big Tings was recorded at Peter Gabriel’s ‘Real World Studios’ in Wiltshire, England. Skindred is an outstanding live band, as I can remember their appearance on the Graspop festival which was for me the best of the weekend, just do it shaking a bunch of drunk heavy metal dudes, this year they are coming back, hell yeah !!