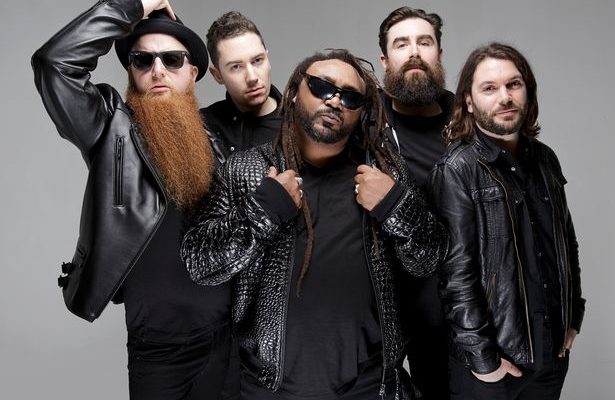 Skindred already played MetalDays in 2015 and they’re back at the top of the bill! We sat down for a chat with singer Benji and bass guitarist Daniel. After some informal chatter, we started with the interview:

You’ve been all around the world. What is your favorite festival?
Daniel: I like any festival where we’ve grown. So this festival is high on my list because last year we opened and now we’re closing. It’s the same with Download in England.
Benji: We love the casual. Some bands happen overnight really quickly, but we’ve been doing this for 14 years. And if it hadn’t gone this way, it would have gone this way.  And it’s been a gradual growth.
Daniel: Yeah it’s been a steady incline.
Benji: And that’s the way we like it. Like MetalDays, we’ve grown up the bill.
Daniel: It’s a nice feeling for us, so you know that the crowd will be great because obviously they have seen you before.

And they know more songs…
Benji: Yeah and it’s not because of the record sales, it’s because they’ve seen a great live act and the crowd thinks we deserve to play again.

You’re a band that likes to play much. Do you prefer clubs or festivals?
Benji: We play anywhere. We play all the time.
Daniel: We like a little of both. They’re both different, the festival is an adverb for the headline show. Unless you’re playing at night where you’re going to get the headline show. There’s a lot of these shows we’ve played for 30-40 minutes, but on our own show we play for an hour and a half.
Benji: We’d love to play stadiums every night.

So that’s the dream for Skindred?
Benji: Yeah of course. If you’re going to do it, let’s do it properly you know? We would prefer to be playing stadiums every night in front of 60 000 people. That would be a Skindred tour.

It’s hard to get there, you guys have been playing for 14 years now, what are your favorite moments?
Benji: I think the magical thing about Skindred is that we are all from totally different mindsets and paths of life, but the music has brought us together. And there are lots of bands that have an argument and disband. We’ve kept going through all the struggles, all the arguments, all the life changes. We’ve stayed there for each other, and we will continue to do so.
Daniel: I think that’s magical. We do live in totally different parts of the country, so if we’d live at the same place we would see each other.
Benji: We’re friends and we talk a lot.
Daniel: We’re together enough and we’re finished with a tour…
Benji: We want to go home!

That’s a great answer. It’s an example for every band. Because there are many bands that have arguments and disband.
Daniel: You just got to suck it up!
Benji: You know, the common ground is you love music and the music you play. And yes you’re going to fight, to argue, and disagree.
Daniel: Just say “what would you rather be doing?”, if you’re going to get upset and have fights with band members and quit the band every 5 seconds… That’s fine, but what are you going to do when you leave the band?
Benji: You got to try and get an other band together! That’s fucking ridiculous.
Daniel: We call it what life is.
Benji: Yeah, we’re in this for life, for real.

I found that being a band coach or manager is often like being a psychologist…
Benji: Yeah of course! We’ve all learned what pisses each other off. We’ve learned to keep away from certain subjects and things like that. It’s like when you’re in a relationship with someone, it’s not everyday the sun is going to shine.

You guys have obviously been to Belgium, and to Graspop.
Benji: Not enough!
Daniel: We were at Graspop a few weeks ago. It was great, brilliant!

What did you think about the Belgian crowd?
Daniel: I thought we should have been on the main stage! That’s what I thought! When we played, we played on the smallest stage, and we had the most people there.
Benji: And we played better than most of the bands on the big stage!
Daniel: So I was like why aren’t we on the big stage? So next time! But the crowd was great.
Benji: Fantastic!

So an other question: what is the story behind the lyrics and the show on stage? What is the story behind Skindred?
Benji: For me it’s about bringing people together, black, white, gay, straight, whatever. People together, making them feel like a unity, within the sound that Skindred is playing. Hopefully the lyrics that I write will encourage people who are going through hardships to keep going. People who are going through hell; keep going, because you’re going to come out the other side. As a lyricist I try to do that a lot. Obviously I write about the band, the performance, the moshpit thing,… But there’s also songs like Kill The Power, which means raising above the bullshit in your life. I just really want to impact people as a lyricist, and as a frontman on stage. I want to bring that unity together.

As a community, that’s cool. I wrote my master thesis about metal as a community and a way to cope with your problems.
Benji: Of course it is! Music is something that no matter if it’s Bob Marley or the Sex Pistols, it’s all rebel music. I identify, and he identifies with music that has passion and tells you “fuck them”, we can do better. That’s the sort of music I like.

Our DJs play your songs quite a lot. And sometimes people come up to them and ask what kind of genre is this? How do you define it?
Benji: How do you define Queen?
Daniel: A rock band, it’s just a rock band that likes lots of different music.
Benji: That’s what we are. A rock band. We’re a rock ‘n’ roll band, just like Queen or Rush or any band like that. Yes, we do draw on influences from the West Indies, and influences from the Western metal scene, but we are a rock ‘n’ roll band.
Daniel: I think if you put tags on things it’s a double edged sword. If you say it is black metal or reggae metal, you put yourself in a little pocket, it puts us in a pocket. And if people don’t like reggae…
Benji: They turn it off, without even listening.
Daniel: So I don’t think it’s cool to call us punk, reggae or hip hop metal. We used to say that in the old days, because we thought we had to tell people who we were, before you hear it. Now you need to just come to a show and listen.
Benji: I think that’s what it’s all about, coming to shows. Then you make up your own mind. It’s like bringing people who just listen to dance music to a Skindred show. Like a colleague at work “there’s this band, come and check them out”, and don’t tell them anything else, just “you’re gonna like them”. And they come and they’re a fan of Skindred. To break down musical barriers.
Daniel: We’re playing on this festival now. And look at all these bands that are really dark, heavy, black. And I don’t think we are an extreme band, but obviously there are people who think we fit in here. I wouldn’t describe us as a black metal band…
Benji: You can describe us as a metal band with a black singer, but not as a black metal band. (laughter)

Ok, so next time people ask us that question we will just tell them: “They’re a rock band, just go check them out”.
Benji: Yeah just a rock band, I like that, I appreciate that.

I really liked what you said about just getting people out there and try new stuff. Because we try that too, we program every sub-genre and we bring the people who are like “no I’m a black metal fan” along, and say that they’re going to like it, and most of the time they do.
Benji: They do! Most of my friends in South Wales just listen to RnB and reggae. And I don’t care if they like my music or they don’t. But they’re my friends and we’ve grown up together. And what I find is that when they come to a concert, they’re our biggest fans! I think you have to take people to the fight to confront them with the smell of blood.
Daniel: Exactly, it’s nice to have no preconceived ideas.
Benji: Yeah, like I just said, we used to describe ourselves as a reggae, punk metal band, but I think we were selling ourselves short. We’re a rock ‘n’ roll band.

Great! One more question; you guys have a lot of fans in Belgium, in our community. What do you want to say to them?
Benji: Good!
Daniel: When we put a headline show on, come and see us!
Benji: Bring somebody with you. And bring T-shirt money, it’s all rock ‘n’ roll honey!
Daniel: Bring somebody you don’t think would like it.
Benji: And if they don’t like it, then they can get the fuck out! (laughs)