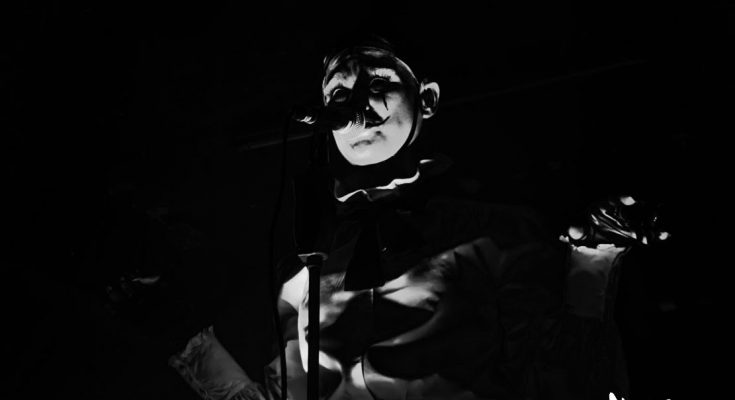 Last week’s Thursday, Skynd played their first London headline show at Electrowerkz, and I was lucky enough to be a part of this experience!
The venue itself is spread across three floors and several rooms. The capacity of these rooms are fairly small, only fitting a couple of hundred people in them. On this night, the rooms acted as a sort of maze leading to the stage. They were covered in crime scene and autopsy photos, drinks- props that wielded the horror theme that would set the mood for the rest of the show.

SKYND’s music is based around serial killers and murders, and their songs tell the stories of these horrific events. The singer herself (who also goes by the name Skynd) said that she wanted to “get as close as possible to the evil that humans are capable of,” and she definitely does this. The lyrics get into the head of the people who committed these crimes and expose the darkness of those who have reached the very edge of their humanity.

The band took the stage around an hour and a half after doors opened- there was no support band. Instead, a projector sheet hung down one wall, playing muted news segments about the events they sang about. The room was designed to be viewed and searched- the dark, industrial feeling of the venue (coming from its design- Electrowerkz is made to look like a warehouse) paired perfectly with the darkness of the lyrics. I was against the barrier, watching the spaces behind me fill up. Perched on a towering speaker was a porcelain doll, overseeing the setup. The creepy doll was modeled after the singer, wearing similar clothing, the same makeup (I swear it’s head moved at some point).

Skynd was stood in the center of a square of lights- dressed in long, flowing black trousers, a white blouse, and tall heeled boots. Her clothes gave the impression that she towered over us, and the concert turned into a performance. Her makeup reminded me of a ventriloquist doll, and her movements echoed this. She would cock her head to the side suddenly or move her arms as if they were being controlled by someone other than herself. This was especially true at the very beginning of the show when they opened with ‘Richard Ramirez’. When the music would drop, Skynd would drop to the floor, and throw her everything into singing the strong, bellowing notes that dominate the choruses of their music. She held her persona of Skynd well- a persona that came from an imaginary friend she has seen from the age of three- keeping crowd interaction low, and only giving the subtlest of nods to the person helping move the mic stand out of the way. Skynd wasn’t the only one in costume- the bassist and drummer wore matching grey hoodies, and masks. The masks were black and designed to look like their eyes and mouths were stitched closed.

The songs fall into the electronic/industrial genres, but it feels more complicated than that. The vocals are definitely dominated by an electronic touch, her voice often altered by voice changers that deepen it and make it higher. Because of this, she can tap into the sound of the people she is channeling. Although, sometimes her real voice comes out in the chorus. This is especially true in the songs ‘Richard Ramirez‘ and ‘Katherine Knight‘. The music behind these vocals can often feel heavier, closer to industrial rock than anything else, with a slight hint of a more electronic sound. It is truly a fusion of genres- one that has something for everyone.

This specific show was important for SKYND for several reasons- while being their first London headline show, it was also the same day they opened their merch stall online. Spread across the table was a black shirt with their logo on it (with a neat glow in the dark feature), a hoodie with the same design, and Skynd‘s “mini-me” doll, which was only £35- just £15 more than the t-shirt.

It was also the first time they played two specific songs live- ‘Mary Bell‘, and another written about the Columbine shooting. These songs were woven between songs that were on their two previously released EPs (‘Chapter I‘ and ‘Chapter II‘) When the concert itself ended after around 45 minutes, the screen lit up again. From where I was stood, I could see Skynd come back out, her eyes glued to the projection. Shortly after, a music video started playing. It was the first showing for the music video for ‘Katherine Knight‘- a video that wouldn’t be uploaded until the day after.

If grisly crime stories and immersive, performance-based concerts interest you, then I would definitely recommend seeing SKYND whenever they go to your hometown. We already know they’re listed to play a few festivals next year!  The show was amazing, atmospheric, immersive, and one I’m not likely to forget about anytime soon.

Check out the full gallery here: