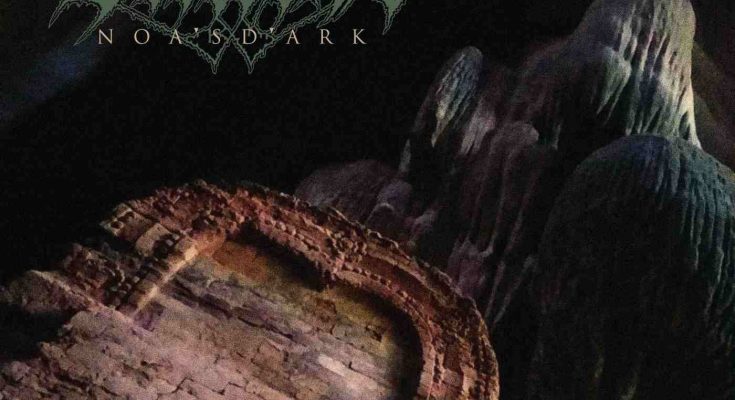 Dutch blackened death-doom metal quartet Soulburn is back with their fourth album ‘Noa’s D’ark‘, scheduled for a release date on the 13th of November through Century Media Records. Originally formed in 1996 after the demise of Asphyx by drummer Bob Bagchus, guitarist Eric Daniels and frontman Wannes Gubbels, they released a stripped down, doomy black metal debut. In 2000, then back under the name Asphyx, the outfit disbanded. In 2013 Rogga Johansson and Bob Bagchus formed To the Gallows with the aim to play black metal in the old spirit of Bathory, Venom and Celtic Frost. After some line-up changes by bringing in Eric Daniels and Henri Sattler to complete the line-up, and Rogga and Henri leaving before their first release, they renamed themselves by bringing back the Soulburn name. Presently the line-up includes veterans from the Dutch underground metal scene such as guitarist Eric Daniels, guitarist Remco Kreft (Graceless), vocalist Twan van Geel (Legion of the Damned) and drummer Marc Verhaar (Graceless).

Soulburn’s sophomore album ‘The Suffocating Darkness‘ saw the Dutch quartet utilizing a crushing fury of the pulverizing drums and guitars where the songs mainly thrust in the vein of Supreme Blood Court, Asphyx and Hellhammer. While this traditional style is not strange to the actual sound of the Dutch bands, their third album ‘Earthless Pagan Spirit‘, which was released in 2016, somehow swerved from the direction of sophomore and considered a change from what the band delivered back then. Now four years later Soulburn demonstrates an undulated mixture of black, death and doom metal vibes. The fourth album builds on a dense guitar atmosphere with riffs being standardized and derived from the classical qualities of primitive black metal. In the pursuit of capturing the sound of the early wave of black metal the superstar veterans maintain balance throughout the album.

‘Noa’s D’ark‘ features many ferocious and dynamic driven tracks. Although the vibe here isn’t quite similar to sophomore release, the songs meander through gigantic paced riffs. The opening track ‘The Morgue of Hope‘ emphasizes the funereal guitar atmosphere before the heavy artillery bombardment of the drums wreaks havoc and shifts the song to a crushing mid-tempo pace. With a combination of bleak undertones the dual guitars inject blazing tremolos carried by the raw energy of the powerful drums.

The impulsive start of the album title track ‘Noa’s D’ark‘ incorporates elements from Asphyx and Celtic Frost. The heavy metallic percussion and the overwhelming impact of the riffs create a massive buzzing sound. Considering the vocal tone of Twan van Geel, his vocals on the album are less raspy and include various growling styles that suit perfectly with the music. The following track ‘Tempter ov the white Light‘ highlights the general inspiration from other extreme bands. For example, the transitional pace from heavier to mid-tempo includes crunchy riffs. Marc Verhaar shows his ability behind the drum kit, puts his foot on the gas and delivers instant blast beats. What really sets the album from the previous releases is the variety of riffs and the ability to infuse different musical backgrounds.

‘Anarchrist‘ which begins with catchy lead guitar work, shows the talent of this band. When the opening moments of the track give the listener an indication of things slowing down, Soulburn surprisingly delivers their most impressive tune by interfusing slower doomy riffs. Along with the hammering drum beats and the double bass sections the guitar tone gets heavily louder. As the storm passes Soulburn presents a number of heavy tracks such as ‘Shrines of Apathy‘ which immediately interfuse the raw components of black, death and doom metal to a swift incendiary performance.

‘Noa’s D’ark‘ is a heavyweight album that shifts to varied paces: despite the atmospheric layering, Soulburn strikes with a continuous barrage of artillery. ‘Triumphant One‘ stands as one of their slowest tracks ever as the dual guitars descend into the atmospheric instrumentation. ‘Anointed – Blessed and Born for Burning‘ suddenly brings their death metal roots to focus: the eruption of the fiery riffs and the full-throttle drums shift to one hell of a crushing death metal assault.

The vocals provide a thrust to the track by mimicking the signature vocals of Martin van Drunen of Asphyx. Though there are plenty of colossal riffs the band never loses its crushing brutal pace. ‘The Godless I‘ is one sonic assault that maintains the formulaic sound of the band structure on massive guitar chugs, memorable lead guitar and an insane drum performance. The album ends with another dark, hellish track ‘From Archaeon into Oblivion‘ which features an atmospheric choir that seems to ebb and flow with the constant barrage of heavy, effective riffs.