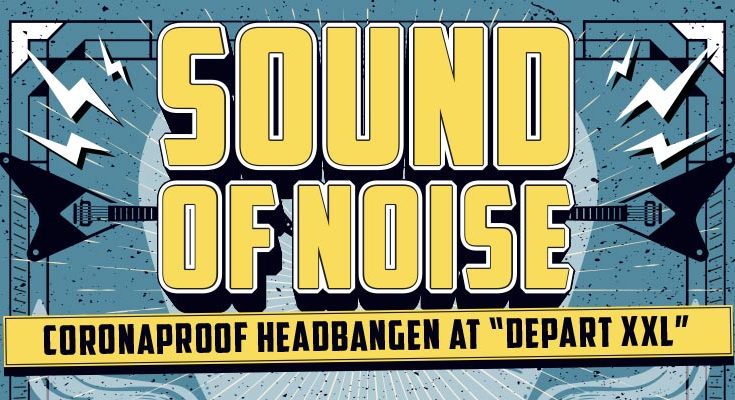 Can anyone describe how much we’ve missed festivals? Not only festivals, but being with friends and meeting new ones as well. Just being in one place together where nothing matters but the music you listen to? You listen together and celebrate music together. That feeling my friends, is what we got to experience again on the mini festival Sound of Noise. Sort of, with all the measures to prevent Covid-19 from spreading, it’s not exactly the same. But it got close.

The organization of Alcatraz did everything in their power to let this event happen and to make it as safe as possible. Even when the government made last minute changes, they made it happen. Everybody got a short introduction of how things worked before they entered the venue. The crew guided you to your place where you had to stay seated. Only if you needed to go to the bathroom, you were of course allowed to stand up and go. You had to order food and drinks by scanning a QR code that was attached to your chair. There you’d pick what you liked and pay with the ‘Payconiq app’ on your phone.

The venue had a capacity for 1200 people, of which 750 were allowed in this time. There were 3 zones, each zone separated form the other one to give people enough space to walk around if they had to. Zone B was the one closest to the stage with the best view. That one got sold out almost instantly as soon as the tickets were online. The zones A and C further to the back, were sold out for 75%. All zones had their own entrances so there wouldn’t be too many people all at once at the same spot. When you had to enter though the entrance of the sold out zone B, there was a bit of waiting time. The first band started at 18:00, but not everybody got inside by then. There were rules to be respected and one rule was to start and end at the hour the city had provided. So it happened. Needles to say, the other Covid-19 rules got respected as well. By 18:30 everybody was inside and got to bang their heads again!

The first band to start off this mini festival was Kortrijk’s own Dyscordia. For me, it was the first time that I saw them and I loved every second of it. The band tried to get some energy from the crowd and they didn’t give up until they got it. In the video below you can hear lead singer Piet Overstijns asking for response, and when he didn’t get as much he said ‘you can do this while you sit down too you know’. The crowd agreed and gave him what he wanted.

After Dyscordia finished playing, the crew mentioned that apparently everybody was so thirsty and hungry that they couldn’t keep up with the orders anymore. They asked us to be patient and to order food and drinks separately. For me personally, I got my food and drinks very fast. Well done crew! You worked hard.

Let’s continue with my favorite of the night: Spoil Engine. Last time I saw them was at the release show of their new album called Renaissance Noire in November 2019. The band (as all the bands of the night) got announced by Channel Zero’s lead singer Franky the Smet-van Damme. Spoil Engine got on stage, started the first notes of ‘Riot’, and lead singer Iris Goessens ran on stage screaming “What’s up Kortrijk!”. The show was on.

After the song Iris told us that her in-ears didn’t work. I don’t know if they didn’t work for the whole show because you couldn’t notice it in her singing. You only noticed that she was touching her ears for a few seconds but that’s it. If she hadn’t said anything, nobody would have noticed. Point proven that she’s a really good singer.

Later in the show, when they played Hollow Crown, we got to a point where normally the crowd gets divided in two and is prepared for a wall of death. You can’t exactly do that when you’re not allowed to leave your chair. So yeah… lead singer Iris solved the issue by making each side of the crowd scream and when the breakdown came, we all had to scream. It’s not the same, but still a good solution with all the rules that had to be kept in mind. There were some people who wanted to stand up, but the band told them to sit down immediately because they didn’t want any drama.

After Hollow Crown, we got treated to Venom, another song from the latest album. Again, you hear the need for a normal concert when Iris says at the beginning of the song: “Let’s get the fuck up, oh no, let’s stay the fuck down. But let’s create a party out of it”.

Spoil Engine closed the show with the song they always choose to be their last song: ‘Disconnect’. A very nice song to end the show, with a big middle finger to all that is wrong and a big heart for the metal community.

After Dyscordia and Spoil Engine, it was already time for headliners Evil Invaders. I’ve seen them a couple of times before, but they never grabbed my attention too much. With this show however, they did. Maybe it was because they were eager to play that they gave it just a touch extra, maybe it was because I was hungry for live music or maybe I just finally saw their talent. I don’t know, but the show kicked ass. They probably thought the same because when guitarist Max Mayhem took the mic to talk to the crowd, he got interrupted by another band mate to tell him that they were already on their last song. The hour of silence was 22:00, and the organization and the bands respected that.

They started off with As Life Slowly Fades. Evil Invaders turned the stage into a smoke bomb and they even brought special effects in the form of sparklers. A very well set up show on a tiny stage.

As Evil Invaders were playing, a lot of people were already leaving. This was probably due to the reason that they wanted to be gone before everybody left at the same time and they might get too close to other people that were not inside their bubble. Again, rules were respected.

At the end of the show, guitarist Max Mayhem threw a guitar pick into the crowd and it landed on the floor. Normally everybody would jump instantly at this and almost fight for it. This time, you saw twenty people looking at it, then at each other, then back it it. Still sitting in their chairs, wondering when was the best time to attack it. Eventually one guy got up, ran to it, picked it up and ran back to his chair.

This was a pit stop everybody there needed. Some people literally took longer to drive there than it took for all the bands to play. It was very nice and very weird at the same time. I mean, you see your friends that you haven’t seen in almost a year and then you are only allowed to wave to them from a distance. You are very excited to be at a show, but you can’t really show it that well since you have to sit down. But hey, better something than nothing and I’m sure everybody loved it to some degree.

I read some comments from people who saw photos of the concert or from people who were there that said that the chairs looked too close to each other and that a lot of people were on there phones. And they’re partially right. The chairs did look far enough apart form each other when they were empty, but once everybody sat down it did look like they were much closer to each other, even though the official distance that needed to be in between the chairs, was in between the chairs. Especially since the last minute rearrangement of the chairs, since the day before the concert, the personal bubble had to be 4 instead of 5 people. The organization made it work and put the chairs in groups of 2 and 3 instead of 5. That must be one hell of a thing to reorganize last minute. And instead of canceling the show, they made it all work. So a big applause for that.

On the comment that a lot of people were on their phones, I think that’s partially right too. But not to do other stuff than enjoying the concert. I saw a lot of people live streaming parts of the concert to share with their friends that couldn’t go or were afraid to go. Or then they might have been ordering drinks and food since that needed to happen through their phones. Of course I don’t know for sure, but I like to think positive since I had a great experience.

In short: Sound of Noise fed the hunger we al have for concerts somewhat. Was it the same as a normal concert? No, it wasn’t, but it was the closest we could get to that experience in the current situation. So again, well done Alcatraz for organizing Sound of Noise and having awesome crew members who all rocked out while running to give us food and drinks. And thanks to the city of Kortrijk for having us.