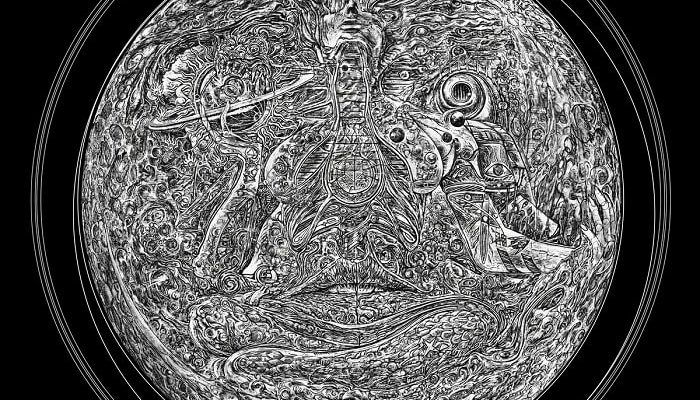 Australian, avant-garde black/death metal outfit, StarGazer became known through its clear conception of modernism. Having formed in the year 1995 by the founding bassist and vocalist The Great Righteous Destroyer (Mournful Congregation, VoidCeremony, Cauldron Black Ram), and guitarist/vocalist The Serpent Inquisitor (Cauldron Black Ram), StarGazer has established its own intellectual and musical prospect of innovation. In the world of extreme metal, the Aussie group set themselves apart from their peers as they have opened up to some of the most exotic experimentation. My personal acquaintance with the band’s 2014 output ‘A Merging to the Boundless‘ gave me an understanding of their sonic spectrum. After four long years of anticipation, they have finally returned with another creative, musical transformation. ‘Psychic Secretions‘ was released on January 21st via Nuclear War Now! Productions.

On the fifth album, the band emphasizes the aesthetics of black and death metal. From the refined guitar solos to the riff progressions StarGazer ventures between the past and the present, proving once more that their musical prowess is the strength of their songwriting. Although the album veers towards the modern technical death metal, ‘Lash of the Tytans‘ experiments with a variety of genres like thrash and black metal. The album features plentiful use of the fret less bass guitar technique which reminds me of the band Sadus. The drums are impressively played by the newly joined member Khronomancer.

The trio eschews extreme brutality preferring to exhibit their talent, although the aggression here is somehow balanced between the sudden tempo shifts. ‘Evil Olde Sol‘ fuses thrash and black metal with an ultra-modern touch of progression. There’s an extraordinary diversity measured by the scale of riffs and melodies. Therefore, complexity is the band’s true nature. The fifth album meticulously showcases the individual’s ability with the vast array of riffs and the drums erupting at full speed and high intensity. The fretting tone of the bass guitar is dominant throughout the run time of thirty-eight minutes.

‘Star Vassal‘ is awash of progressive black metal elements that bring Sarcófago to one’s mind, besides the somewhat flamenco, melodic technique. There are plenty of slow tempos that illuminate the instrumentation in which their refined sense of melody is beautifully textured. StarGazer brings many ideas to their craft, hence they continue to solidify their trademark sound. ‘Psychic Secretions‘ is a testimony of the band’s musical skills that represents the modern flair of avant-garde metal. While each track stands as a sonic effigy, ‘Hooves‘ is built on an innovative riff structure where the guitars on this track show unique aptitude. Another attribute here is the superb drumming performance that possesses different dynamics.

‘The Occidental Scourge‘ is determined by old school blackened thrash metal. The energetic riffing and the organic performance of the drums becomes more solid and intense in this track. The album combines the architectural elements of jazz and technical death metal. With the characteristic proggy style delivered in a more intricate and visceral performance, StarGazer captures many inspirations from bands like Cynic and Atheist. This explains the varied approach to different musical styles.

The new album offers many aggressive riffs, bass licks and there’s definitely no question of what the band is capable of. The songs are full of dynamics, even though there are many tempo changes among the songs. The rhythm guitar, bass guitar and drums are the basis of the composition here. The fierce dynamism that matches the old school black metal on tracks like ‘All Knowing Cold‘ is provided by solid aggression.

There also some clean vocals passages that segue into a dark trance-like moment on the closing track ‘Pilgrim Age‘. It is focused on the transition from the calming, hypnotic tempo of the infused melodic chords and shifts to the sonic convulsions of the double bass. ‘Psychic Secretions‘ is multifaceted and refined, but it also marks a new age for these avant-garde modernists who have released a stellar album. Recommended for fans of VoidCeremony, Absu and Sadus.