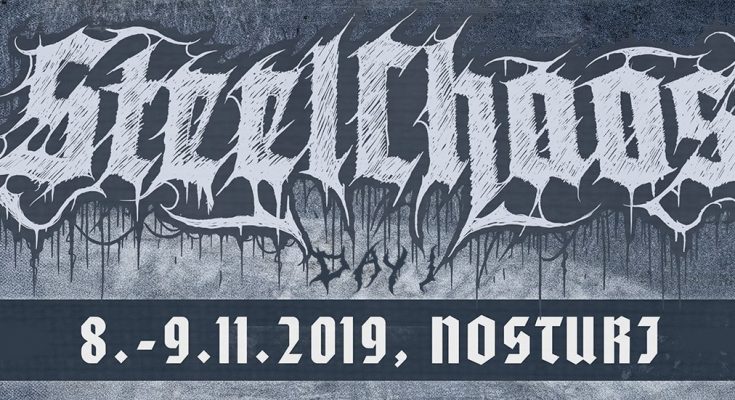 The first act of the festival couldn’t be more straightforward than this in terms of Finnish black metal. Black Beast brings raw black metal, a whole bunch of pins, inverted crosses, corpse-paint, blood and torn clothes with them and it translated in a perfect warm-up for the rest of the night. Especially frontman Infernal Tormentor Necrocorpse von Demonblood (quite the mouthful) was an impressive presence on stage pouring blood over his head, staring fiercely to the crowd and gurgling up vicious growls from the depths of hell.

Blaze Of Perdition was up next, all the way from Poland. Their brand of black metal has a couple of more doomy and atmospheric elements infused, immediately making it more enjoyable to me with more dynamics and intricately written music. Add to that the rather mysterious hooded figure behind the microphone switching between growls, hauntingly deep cleans and spoken word and you’re in for a very intriguing and passionate show.

Then suddenly the room started to fill up way more than before. A sign that one of Finnish black metal scene’s most legendary bands was about to take over the stage. Barathrum was one of the first outfits in a budding Finnish scene and has since become one of the more prominent bands of the country. There are all kinds of legends and stories floating around the name. When only original member and vocalist Demonos Sova strolls on stage and emptied his can of beer before starting, that sense of unpredictability, danger and an attitude of “I don’t care” quickly validated the possibility of those stories. They started playing and all hell broke loose in the room. Beer was flying (and not only in Demonos‘ mouth), people were shouting along like crazy and a moshpit was going from start to finish. Madness. Of the good kind.

With Behexen another quite prominent and legendary Finnish black metal band arose from the depths of Nosturi. The occult and satanic outfit lead by frontman Hoath Torog, who came across as a demon from another dimension, played an overwhelmingly harsh and brute slab of black metal with evil (and blood) dripping from it. Just as the last time I saw this band, they are a prime example of what a black metal show is like.

Somewhat out of tune, but at the same time absolutely at home with the rest of the bands was the German thrash band Destruction. Named as one of the “Big 4 of Teutonic thrash metal”, they had an early black metal sound and vibe like Venom. Schmier and his buddies rage through a violent and volatile set that got the whole crowd riled up from start to finish, whether it be with old songs or brand new ones from their latest release. Killer show from one of those bands that have been pioneers in several genres.

Second Polish band and closer of the first night is somewhat of a rising star in the black metal scene. Mgła has been carried on hands for a couple of years now and that was clear by both the amount of people sporting their band shirts and people still arriving shortly before their show started to just see them. Their latest release ‘Age of Excuse’ is for many one of the best releases of the year and Nosturi was absolutely filled to the brim with fans. The curtains were opened and the hooded and masked figures hiding all identity immediately kicked off their set of misanthropic black metal. As usual it was a solid show, but after having seen them already a couple of times before, nothing really excited me of it.