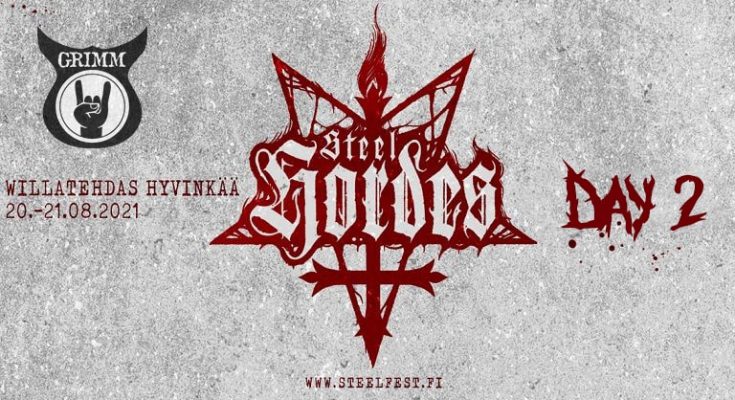 After a good 1st day with actually what seemed like a quite decent turnout, they kicked off the 2nd SteelHordes day early in the afternoon with some happy hours and a selection of proper underground tunes hand selected by the DJ for the opportunity DJ Mynzig. Quite a few visitors were already blessed pretty well by the alcohol gods by the time the first band kicked off…

To start off well, we got a familiar face on stage by the likes of Tyrant, who we saw the day before as vocalist of Kalmankantaja. Malum is his project to begin with and brings a more traditional Satanist black metal sound and vibe. Their earlier released album ‘Devil’s Creation’ is probably their best release to date and despite having to play in the full sun, they managed to get the vibe across perfectly. The this time more towering and hulking figure of Tyrant outfitted with spikes, leather and amulets had a good command over his legions and was backed by a group of strong musicians, with especially the masked up bassist KK grabbing quite some of the attention with his very energetic and engaging stage presence. A great start of the day, immediately pulling us into the right mood for what was still to come.

With Morgal we continued down the path of occult and dark rituals, but this time with a healthy sauce of chaos thrown into the mix both musically and lyrically. Vocalist/bassist Lord Warmoon marched on stage and gave us and the world a solid middle finger before they kicked off in high gear. After having to miss out on the blackened thrash of Bonehunter the day before due to their cancellation, I definitely highly appreciated the thrash metal/punk touch I found in their brand of black metal. I caught myself nodding along to the music more than once.

Having released their debut full-length ‘Realm Of The Night’ only a week earlier, their show at SteelHordes was basically a release show for Chamber Of Unlight. A collective of Finnish black metal musicians from some of the most prolific bands of the scene like Ajattara, Horna, Behexen and so on, lead by the rather impressive figure of Necrosis. His almost presence felt dangerous and almost volatile. Add to that the musicians surrounding him with each their own contribution to the heavy atmosphere of darkness and occult, like Infection with ferocious guitar playing and maniacal facial expressions, or Leper with his regular screams of ecstasy and demonic faces. A highly impressive show by what you could call somewhat of a “supergroup” of the Finnish black metal scene and yet another possibly legendary band added to an already long list of the Finnish underground.

Perdition Winds brought back a couple of familiar faces with at the forefront guitarists R.Ä. and T.K., who we caught the day before with the death metal outfit Lie In Ruins. This time around they came to present us with a solid slab of more traditional Finnish black metal in the veins of Sargeist and Saturnian Mist. T.K. brought us again a similar level of demonic facial expressions and stellar guitar work, alongside the more stoic R.Ä. Vocalist J.I. perfectly exemplified the more occult and anti-religious nature of the band, bringing a rather impressively haunting performance and regular ritualistic hand gestures. A band I personally hadn’t gotten familiar with before, but will be keeping an eye on them from now on.

Now this is a band that really stuck out among all the others on the bill! The Finnish death metal outfit Torture Killer has absolutely no relation to black metal whatsoever and delivered an hour of their extremely groovy and heavy hitting brand of metal. Being inspired by the legendary Six Feet Under, they’ve managed to keep up the high quality death ‘n’ roll way better than their inspiration has to this day and kills absolutely live. Pessi is an absolute beast on vocals and matter of fact, so it the rest of the band with their instruments. There was not a single negative thing to be found in their performance and caught myself more than once nod my head to their music with a big grin on the face. I’m usually not the biggest fan of death metal, but this you can serve me any day of the week!

And then finally it was time for the main act of the day! Again a replacement after the cancellation of Satanic Warmaster, but also again no complaints here. After impressing us highly with last year’s release of ‘Kuoleman kirjo‘ (read our review here), it was good to finally catch one of the mainstays of the Finnish black metal scene live again. As usual, Horna absolutely ruled the night. Going from a bare-chested, caped and hooded Spellgoth leading their black mass with skillful mastery of the crowd to the as usual maniacal performance of Infection and the more stoic presence of main man Shatraug, this was the black metal ritual we all were waiting for this past period and it almost felt cathartic to be able to experience this. Let’s keep this going, please!

For more pics of day 2, go check out our photo report here.