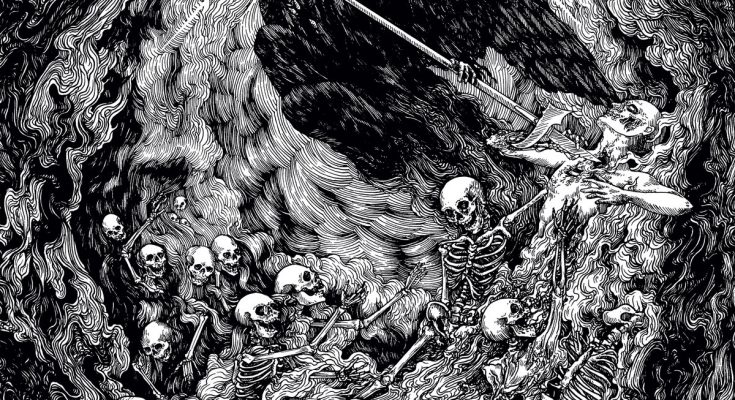 Following the release Ossuarium‘s first album “Living Tomb” and the Tomb Mold album entitled “Planetary Clairvoyance”, 20 Buck Spin presents us another strong album by U.S. death metal act Superstition. After their demo which was highly welcomed in 2018, the New Mexico death metal outfit returns to shock the underground scene with their first full-length album entitled “The Anatomy of Unholy Transformation”. Superstition‘s musical influences extend between death and thrash metal and one of the strengths of the album is that the songs are played very fast with lots of tempo changes.

The band simply mixes the styles of 80’s death and brutal thrash metal with black metal sounding vocals. There is an incredible feeling of violence as most the tracks sound very furious and played at a fast tempo. The opening track Unholy Transformation Pt.1 is a frightening intro based on synth which evokes the theme of a horror film. Once the guitars initiates with the drumbeats, the vocals are uttered in low growls. The sudden force of the raw guitars on the second track Highly Attuned Beasts of the Dark kicks in with extreme riffs that are delivered in the style of death/thrash metal. The clear qualities of thrash metal and groove are performed in fast tempo. Superstition are mainly prone to the rudimentary phases which can be traced to the early methods of death/thrash metal. That spawned in the late 80’s which carries the raw standards of American and the Latin American death metal bands.

The tracks on the album are played by the aggressive guitar riffing, which also provide some catchy lead work, the drums have a big impact over the songs. The Anatomy of Unholy Transformation isn’t the typical death metal that you’d expect, throughout the tracks the guitars discharge palpable excitements from the hysterical solos. By the third track Spiritual Sunderance the band obviously establishes their music as they draw the similar particularities to bands such as Peruvian death metal band Mortem, and even Morbid Angel‘s first album. The sheer representation of the early style of death metal is applied by the extreme tremolos. Truth is not many bands evoke this kind of death metal style, most of the bands seem to be influenced by the Floridian bands, and the Scandinavian old school death metal.

Superstition have set clear boundaries on their debut The Anatomy of Unholy Transformation isn’t a lengthy album, most of the tracks have limited time running of 4-5 minutes. The album includes 6 tracks and 2 intros which are based on the synth work, the onslaught of the aggressive guitars continue to resound on Passage of Nullification. Superstition presents one strong track after another, this track is mixed with crude and nasty old school riffs. Which defines the authenticity of this genre, and the truculent nature of the discharging riffs makes each track sound very interesting.

There are other bands which come to mind while listening to The Anatomy of Unholy Transformation. Those who are familiar with the old school death/thrash metal band Massacra and their classic albums such as Final Holocaust and Enjoy the Violence, will certainly enjoy the extreme power and vehemence of the assaulting guitar riffs. In addition the current style of Superstition is the counterpart of the Swedish death/thrash metal band Merciless. This also shows that this kind of death metal style was very common in that phase of time. Torn in the Outer Lands has that natural force presented in a cruder way, there is a standard and unchanging consistency within the tracks.

The evil thrashing feel is attained by the extreme approach to the tracks, there is also a great tempo and enough intensity in the guitar department. In addition the band has obtained a great technique level, Un-reclaimed Blood (Phantom Swarm) uncovers these musical abilities and shows more variations. Superstition strikes hard with their debut album and the band seems to have excellent proficiency in merging death and thrash metal into one energetic and highly octane album. If you are into the classic old school bands such as Massacra, Mortem, and Merciless then make sure to check out this album.