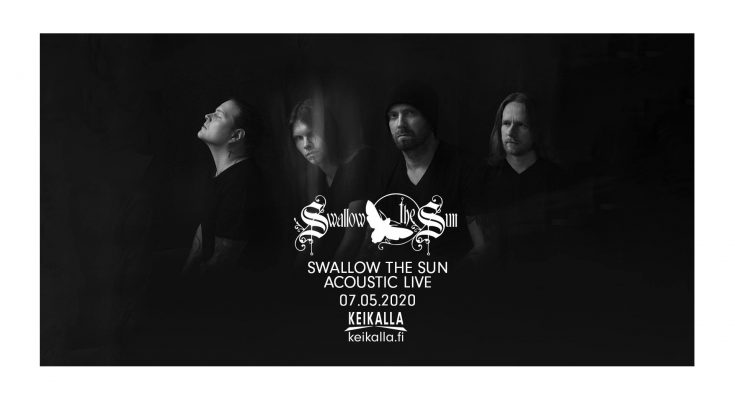 All of us are starting to miss concerts really much, I’m pretty sure. Especially people like me who used to go to at least one concert every week. So when you get the offer to follow the fully acoustic live stream concert from one of Finland’s most popular bands that has nailed down capturing the melancholic nature of their country with supreme doom and gloom bliss, you grab it with both hands. So I set up with my best speakers, big screen, some mood lights and a couple of cold ones to watch Swallow The Sun‘s (*****) performance at the very respected Sonic Pump Studios.

When the concert starts, we get a view of the cozy live room of the studios where many Finnish bands have passed by to record music. One of the most recent bands that were recording new work at the studio, was Finntroll. Who were apparently still hanging around behind the glass after finishing their new album, watching the live stream from a safe distance or like the guys of Swallow The Sun jokingly said: “They’re watching this for free, the bastards!”.

A simple 4 person set-up with of course Mikko Kotamäki on vocals in the center with Juho Räihä on guitar and Juuso Raatikainen on bass (instead of drums) on his sides and more in the back Jaani Peuhu on keyboards, backing vocals and a collection of different effect systems and interesting different instruments. No dual guitars or drums this time around and I must say it was not something that I missed throughout the concert. Besides a handful of beers, they were only joined by the “Hawk of Doom” and a couple of tablets from which they answered some fan questions between some of the songs.

Not too surprisingly, most of the songs they played came from ‘Songs from the North II‘, the acoustic album that was part of the impressive ‘Songs from the North I, II, III‘ trifecta release. In essence they played all but the 2 purely instrumental songs from that release. Having seen this in a live setting before, I knew that this shows off the beauty of Swallow The Sun‘s music in its full glory. Besides the tracks from that album, we got a hauntingly beautiful acoustic rendition of ‘Firelights‘, one of the highlights of their latest album ‘When a Shadow is Forced into the Light‘ early on, joined later in the set with ‘Stone Wings‘ and ‘Here on the Black Earth‘ from that same album. They closed down their set with 2 covers, namely ‘Your Decision‘ from Alice In Chains and ‘Forgotten Hopes‘ from Anathema. The Alice In Chains track didn’t really work the best with Mikko‘s vocals in my opinion, it felt like something was missing a bit, but the Anathema one was absolutely magical.

This was the first time I properly attended one of these live stream concerts and if they’re all of this quality in sound, video and content, I can see myself join these more often. Since at the moment it seems like there won’t be much other options, I’m looking forward to see what creative things the music industry comes up with still to keep these online events interesting and engaging. In any case, hoping to catch this band again on one of these in the nearby future!