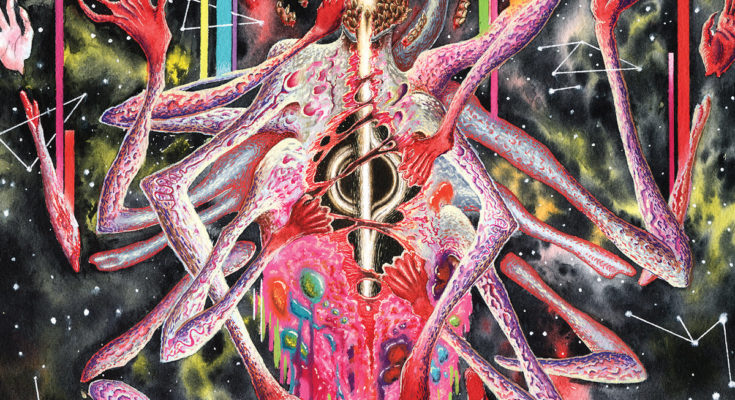 California’s brutal death metal band Teeth made an imposing release with their dissonant quality of death metal. ‘The Curse of Entropy‘ is their second album with guttural growls that are matched to the level of many renowned death metal acts today. Five years later Teeth finally found their way into the U.S. death metal scene. The band has made some stylistic changes regarding the sound. As they shifted towards a brutal sound while the debut album ‘Unremittance‘ had some death/doom elements. The arrangements on the latest album offer a hidden affection to technical death/grind metal.

Teeth‘s death metal style evolved steadily over the past years. The first thing that will strike you is the paradigm of direct dissonance. Many of these tracks possess a furious and grinding proportion simultaneously the discordant riffs and the loud drum blasts are the core structure of the album.

‘The Curse of Entropy‘ opens with an extreme track, ‘Enlever‘, which is a powerful song characterized by sheer brutality. The guitars produce inharmonious riffs led by heavy guttural growls. At the same time Teeth focus on the technical abilities. The following track ‘Husk‘ is the album’s highlight and it features Luc Lemay of Gorguts as a guest vocalist. The band makes a horrific depiction of brutality, therefore you can somehow sense the similarities between Teeth and New Zealand’s technical death metal act Ulcerate.

Besides the heavy guitar riffs, the drum patterns on the third track ‘Wither‘ are absolutely monstrous and brutal. With terrifying growls and double bass bringing the quality to the track, there are exorbitant amounts of blast beats and dissonance spewed in the tracks. The song-writing is built on a dynamic effect and tempo changes stimulated by massive drums and filthy riffs. ‘The Curse of Entropy‘ is a cataclysmic album and Teeth has raised the level of brutality. Induced by a high and energetic level of musicianship. The fast-paced ‘Collapse‘ contains some intricate drum patterns and develops into an extremely brutal death metal track.

Every track here is unique and has its own extreme tone, Teeth‘s recent evolution reminds of the early days of Ulcerate minus the apocalyptic and horror themes. The tight musicianship on tracks like ‘Birthright‘ is loaded with heavy chugs. Although there aren’t any catchy hooks to be found in the tracks, Teeth begins every track by showing their technical talent. ‘Cretin‘ somehow verges on slow death metal by showing the great scale of brutality. The band depicts a great sonic quality by showing a distinctive sound. In other words, such a trademark style is quite absent.

‘The Curse of Entropy‘ is a modern death metal album and has a run time of 30 minutes, driven by harsh guitar riffs and blast beats that boost a magnitude of dissonance. Therefore, the album can be regarded by technical mastery and the complexity of the songwriting that excessively dominates the skill of the Californian death metal act. ‘Dread and Blindness‘ are both sharp and brutal the emphasis is put on the hyper blast beats. Teeth have created a monstrous dissonant album of metallic barbarity. It’s very obvious that they lean on the harsh and brutal side.

The album cover itself is visceral and a fiendish embodiment of evil. ‘The Curse of Entropy‘ includes a wide spectrum of dissonance and injected with grinding elements makes it quite bizarre yet impressive. The aggressive growling continues on the dense track ‘Entropy‘ and shifts between the technical prowess and intensity. While the riffs are powerful and abrasive the band was able to bring enough variety to the songs. On the final track ‘Vessel‘, the guitars are brought at ominous quality with ear-catching melodies and thick bass guitar.

The album combines a set of excellent lead guitars and tempo changes, all propelled by heavy brutal riffs. This is to say that Teeth is a forward-thinking band, the latest effort focuses on a progressive aspect. Teeth with their brand of death metal have somehow differentiated themselves from many bands today. If you’re a fan of Gorguts and Ulcerate, then this album is surely going to satisfy you. This is a modern and ill-defined death metal record that does not pertain to any rules.