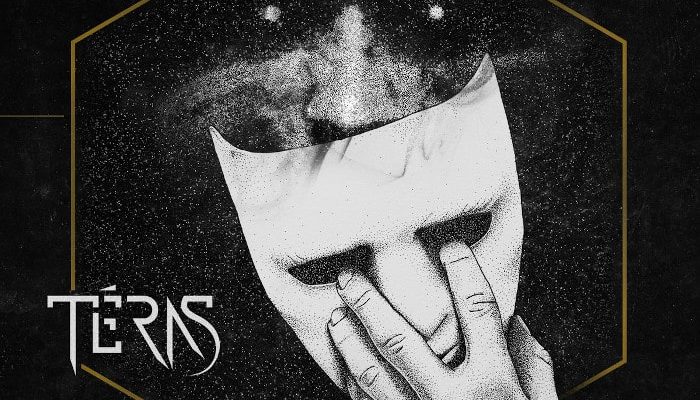 Belgium, what a country I get to live in… so many talented bands and I consider Téras to be one of them. The cover artwork of ‘Broken, Frayed Ends’ shows us what happens when the mask falls down. Who is really behind it? Well, it is a 4 piece metal band from Ternat, Brussels. After first album ‘Pandora’ in 2016, signed and released by Sideburn Records (Bark, Onmens, Your Highness, …) and Consouling Agency (Vonnis, Carneia, Brutus, Hedonist, …). Téras received positive reviews, supported Voivod and played at Antwerp Metal Fest 2018. Now they present ‘Broken, Frayed Ends‘, their second full-length, recorded at the Much Luv Studios and produced by Tim De Gieter (Brutus, FÄR,…), mastered by Alan Douches at West West Side Music (Converge, Dillenger Escape Plan, Mastodon, Monster Magnet,…). We are in for a nice adventure…

First track and title track “Broken, Frayed Ends” is slow, deep and dark, with the major theme throughout the album: the end of love, death, life… it all ends. Second track ‘Follow the Herd‘ is going in straight-forward, it has a thrashy edge combined with a nice breakdown. Sam Stoelzaet on drums is demanding but lays in nice cymbals accents and blast beats, Kevin Spruyt on vocals is now raw and more desperate. It was the opening guitar melody of the third track ‘Waiting for the end of March‘, that gave me that feeling “wow what a band!” It could be Bring me the Horizon or Killswitch Engaged but Téras plays it more black than ever, nicely done.

The fourth and fifth track are ‘Enter the void pt I’ and ‘II’. ‘Part I’ is starting off with a nice melancholic tune but takes a turn on the thrash speedway. Frederik Janssens and vocalist Kevin Spruyt on guitars are switching fine melodies, groovy riffing and magnificent solo detail work. ‘Part II’ is more of the same, but a bit more melodic death metal to me. ‘Lost Souls I Hope You Linger‘ is death metal with melodic breakdowns but the song continues to go faster and faster, with a nice ending by the way.

‘Lucifer, the Devil in me‘, for me a song with an attitude; a mysterious intro, a beautiful bass line played by Oliver Puttaert making it a bit catchy and dark. This is so well balanced with the guitars, bass, drums and more screaming desperate vocals. The mood, the groove, the tempo changes,… make this my favorite song on the album, simply brilliant. “This is where we part, is where we part, your final call, your time to end it all…” Strong, brutal, raw. ‘Charon’s Obol‘ is the last song on their album, dark, doomy, melodic riffs, our journey to the other world feeling, where we fade out…

‘Broken, Frayed Ends‘ is something you need to dig in deeper, the more I listen to it, the more nicely done guitar layers I discover. It has the Téras groove with black, thrash, and death metal all done by the book. Téras has potential and may be proud of what they delivered.