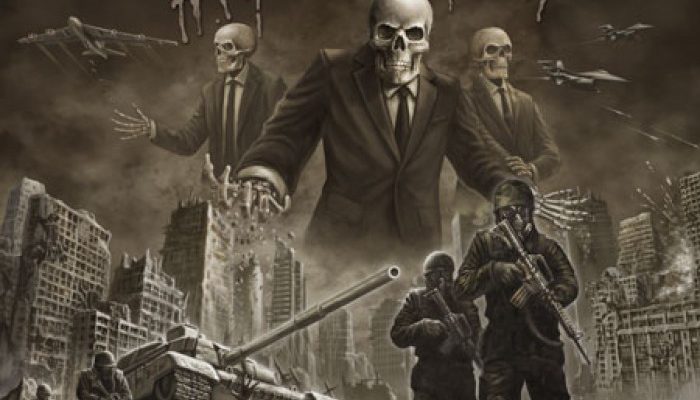 Terrorizer are finally back after six years of silence. And it’s about time too! It has been a long wait since Hordes Of Zombies came out, and I kept wondering whether and when they would release another record. Now they bring us Caustic Attack, which was released through The End Records and hit the shelves on October 12th, 2018. I’ve had this album lying around for quite some time, and I’m finally getting around to reviewing it.

Terrorizer founder and drummer Pete Sandoval reminds us that he always was and still is one of the fastest death metal and grindcore drummers. The man is a machine! I guess there are parts on Caustic Attack where he takes it down a notch, but I think that’s just because he wants to lull us into a false sense of security for, like, 15 seconds per song. When you think you’ve got time to breathe, he just starts ramming again. Worst of all: he makes it seem like it’s the easiest thing in the world.  Take the opening track Turbulence, for example. It starts off with a set of thunderous drum rolls, which are followed by some of the fastest and tightest blast beats possible. The opener sets a strong mark for the rest of the record.

Ex-Monstrosity vocalist Sam Molina lends his violent growls to the carnage that is Caustic Attack. He is the voice of wrath that Terrorizer brings upon us. His vocals are fast, visceral, and within them resonates pure rancor. Terrorizer are angry at everyone and everything, and they want you to feel it. You will feel, well… terrorized (ba-dum, tss). The vocals actually remind me of Cannibal Corpse’s George ‘Corpsegrinder’ Fisher‘s rage-infused grunts.

While the riffing on Caustic Attack can certainly be categorized as grindcore, I cannot help but identify some of the guitar work as being utterly death metal. Indeed, some guitar hooks remind me of, to cite one example, Belphegor‘s catchy and more melodic tunes. Invasion, Conflict And Despair and Wasteland are perfect examples of that typical melodic zooming you find in death metal rather then the grind genre. This is some catchy stuff, guys. You’ll be humming the shreds on Trench Of Corruption, or banging your heads to the grooves on Crisis or Devastate solely out of memory.

Now so far I’ve really focused on the death metal sound that stood out to me. But let’s not forget Terrorizer is also a synonym for grindcore. That much is clear on tracks such as Sharp Knives, on which the screaming riffs and drum patterns make me want to climb on peoples backs and crowdsurf to the front of the imaginary stage in my head, and stagedive all the way back again.

This album is as straightforward as it is fast. I got a strong ‘no-bullshit’ vibe in my multiple listens and I love that. Even in the longer tracks – not that a more extensive play time automatically means that a record drags – kept my attention and my heart pounding. It’s the same feeling you get when you’re swamped at work, but the day goes by so fast you haven’t even had time to think about what you were doing, but you still managed to get through more shit than you would on any other day. That’s the level of satisfaction Caustic Attack brings with it. It is relentless. It is engaging. But more importantly is is fun as hell. 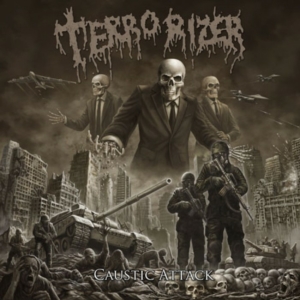