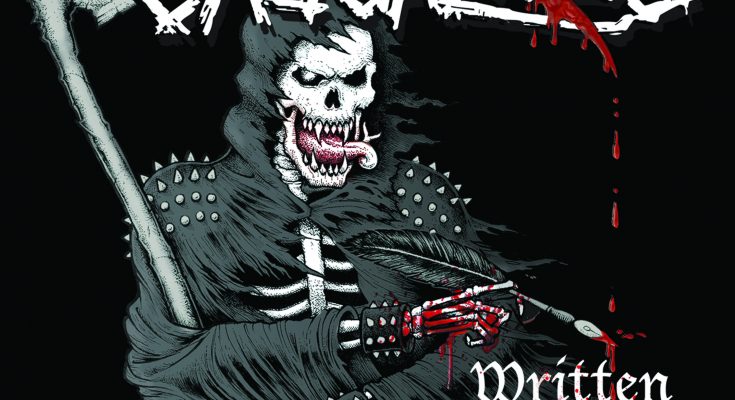 Straight from the dark corners of New York City, street punks The Casualties are back with a series of uppercuts on their new album Written In Blood! The first release with their new vocalist David Rodriguez (The Krum Bums) replacing original vocalist Jorge Herrera is a fact now.

And while it was a sad thing to see the only remaining original member of The Casualties leave active duty, I think I can say that David manages to replace Jorge very well. It’s not exactly the same, but there isn’t a moment really where they don’t sound like their old self. It’s still straight up hardcore/street punk in which they shout their annoyances and grievances with society on the top of their longs. Short songs with choruses filled with chants that every crowd will be able to shout along within seconds is what we expect and what we get.

Straight from album opener and first single 1312 ACAB they show that they’re not even considering to back down. A song dedicated to the many police brutalities happening in the USA in which they continuously shout “1312 ACAB” as chorus. For those who are not knowledgeable about what the hell it means: All Cops Are Bastards… Fucking Hate You, Written In Blood, Feed Off Fear… one for one angry punk songs that just get you psyched to jump into a moshpit, dive from a stage and raise your middlefingers while doing so!

There really isn’t much more to say. All songs are quite similar in their viciousness, anger and catchiness with many chants. Most of the variation between the tracks is sounding a bit more punk (Demolition) or rather oi! (Ashes) or even almost thrash metal (Feed Off Fear). And of course I can’t forget about second single Ya Basta sang all in Spanish! Don’t worry, there’s not a moment to get bored by because one after the other song hits home hard and after a good half hour of this high energy music you feel like you’re ready to take on the world… and to hit play again! Especially after closer Borders with its marching drums and unapologetic big middle finger towards their government, repeating “Fuck your president and Fuck your wall, Fuck your border and Fuck you All” to close down this angry album. And I couldn’t agree more!

The Casualties do what they do best on Written In Blood: they’re angry and won’t take your shit anymore, so fuck you all! Street punk, hardcore, thrash metal, crossover… you can find it all on this release and will get you hyped up to a state in which you won’t be fucked around with. Classic Casualties! 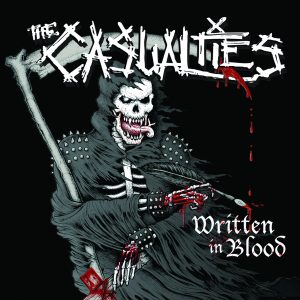