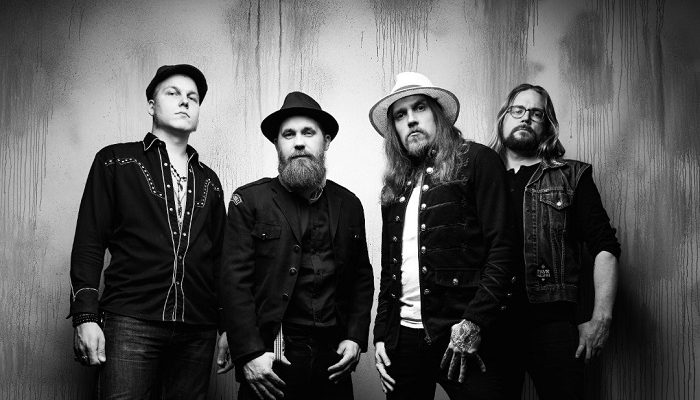 After the typical Ennio Morricone sounding intro track during which the 4 guys come on stage one by one, The Empire Strikes (****) kicks off a night of rocking out with the singles ‘Rainmaker’ and ‘Blinded by the Light’ from their latest full-length release ‘Charm’. The hunger and built up energy is almost palpable with them and it doesn’t take long for most of the people in the crowd to start dancing along to the catchy melodies. Talking about catchy… it doesn’t take long for them to throw their brand new single ‘License to Thrill’ at us, which was released only earlier that same day! And what a track it is! If this is a taste of what possibly is to come on a next full-length, it’s going to be a banger!

As usual, main vocalist/guitarist Tommi is his charming self, while guitarist Topi runs, jumps and dances around relentlessly while cranking out groovy riffs and tasty solo one after another, both regularly leaning back to back or ending up on their knees cranking out rockin’ riffs. Bassist Paavo moved around more reserved, not holding back from moving to his own groovy bass lines from time to time, providing the rhythm backbone of the music together with drummer Otto. The setlist continued with a well-balanced mix of tracks from ‘Charm’ like that other single ‘The End’ or fan favorite ‘Theme from Rocky’ and tracks from the earlier ‘High Tide’ and ‘1983’ albums with tracks like ‘Road to Extinction’, ‘Magic Man’, ‘The Last Pirate’ and ‘The Fix’. All in all, as usual on their anniversary shows, a performance with rock ‘n’ roll highs and slower emotional moments that never lost one bit of its energy throughout.

At their anniversary shows, The Empire Strikes usually has some special surprises along the way like guest appearances and tracks they otherwise never play live. This time around it seems they mostly wanted to focus on finally being able to play live in front of a real crowd with just the 4 of them. However, after the last track was still vibrating through the air, the guys rewarded all the people who took the effort to be at the show by putting on the at that point unreleased music video for their latest single ‘License To Thrill’ as an exclusive preview. The clearly Bond/007 inspired video was a really cool reveal and you can watch yourself here: