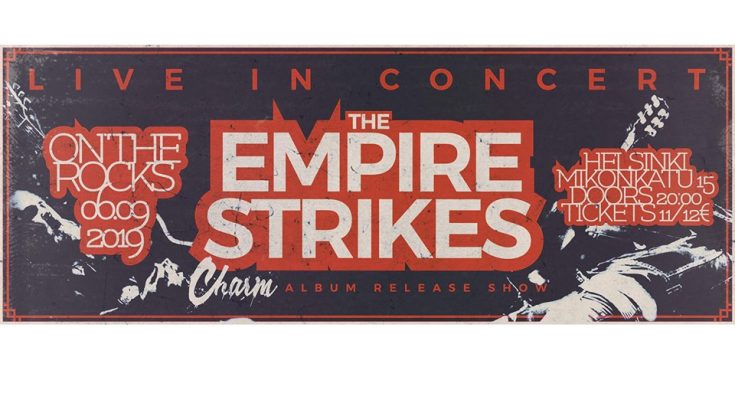 In the Nordic countries there are surprisingly many rock bands showing up that lean towards the vintage kind of style of rock. And all bringing along with them some damn good quality! One of those is the hard rock / rock ‘n’ roll outfit The Empire Strikes from Finland. They released their brand new full-length ‘Charm’ and were celebrating this with a release show at On The Rocks in Helsinki!

Opening for them, was the Finnish high octane rock band The Backstabbers. Sadly I arrived only in time to hear the last couple of songs, but it confirmed to me that if you’re looking for some fast-paced and high energy hard rock, these guys are a good choice. Think of a blend of Motörhead, AC/DC and the lot and you’re pretty damn close!

And then The Empire Strikes took over the stage… Just like I remembered from before, they served us up with some classic rock ‘n’ roll and groovy music. Vocalist Tommi has quite the set of lungs and isn’t shy of showing off his talents. On his sides you got the always very energetic Topi on lead guitars, regularly bending over backwards while bending the strings on his axe with passion and the more calmly striding around Paavo on bass. Backed by the solid drum section manned by Otto and for the occasion an extra man on backing vocal & percussion duty, the gig has a solid groovy start with a mix of older and newer songs.

The rock ‘n’ roll party really started though when they undertook a little sidestep with the help of mister Eduardo Martinez from The Flaming Sideburns on guest vocals. With who they also have a track on the new album. Eduardo took over the stage for a couple of songs with his boisterous appearance that held somewhere between the frantic performances of Iggy Pop and passionate quirks of Mick Jagger. It was an amazing addition to the show and shot the energy through the roof! Eduardo was preaching to ‘Save Rock ‘n’ Roll‘ and for those couple of songs he really showed us how to accomplish this.

After he handed over the stage back to The Empire Strikes, they had to keep that energy up and did that task wonder well. They shot one after the other rocker at us and the new songs from ‘Charm‘ fitted perfectly with the older work. As they do with every show, they finished big with another banger of a track and Tommi and Topi ending up on their knees on the floor cranking out those last guitar chords, leaving the almost completely sold out On The Rocks hot and sweaty behind…

Setlist:
Rainmaker
Devil’s Gospel
Danger
Blinded By The Light
The Ballad Of Sailor Hawkins
King Of The Jungle
Black & White TV
Theme From Roky
Amor Por La Vida (with Eduardo)
No One’s Gonna Do It (with Eduardo)
Save Rock n’ Roll (with Eduardo)
Fix
Blackheart
The End
All Hope Is Gone
Sonic Hurricane
End Of You
Mighty Hoax…
Take Me Out
Magic Man

For more pictures of the night, go here:
https://www.grimmgent.com/the-empire-strikes-charm-release-show-on-the-rocks-helsinki-6-9-2019