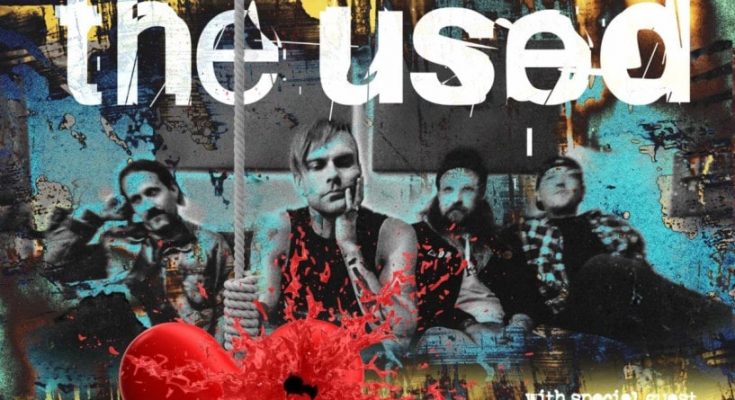 With a brand new single under their arms of their upcoming new album ‘Heartwork’ and an anniversary to celebrate, The Used set out on a big North American tour bringing their catchy rock to their fans all over the country. Being a fan of their soaring songs and emotional attitudes, I simply had to catch their show at The Beacham in Orlando, Florida.

This was the first time I had attended an event at The Beacham; a 1300 person venue located in Orlando, Florida. I don’t think they could have picked a better venue for The Used to have played in. The venue has an open floor plan with balconies lining the outer walls and a few small bars located beneath them. The stage is slightly elevated which means there is not a single bad vantage point in the establishment. The sound quality was amazing, this may have been the best that I have ever heard The Used sound. There was not a dull moment for the following two plus hours. They played a stunning 14 song set that hit hardfrom the second they took the stage till the final note was sung.

The Used are celebrating their 20th year together and have more than enough hit songs to fill several shows. Opening up with “I’m a Fake” got the crowd completely fired up. And the magical night did not slow down, from songs like “Take it Away”, “Listening”, “I Caught Fire” and their newest song “Blow Me”. They continued to pump up the crowd as they transitioned into each song. At one point Bert McCraken sprayed a mouth full of water up into the air and it only seemed to pump up the crowd even more. To cap the night off they finished with a fantastic 2 song encore. The encore included “Paradise Lost”, which is a poem by John Milton and a brilliant mashup of “A Box Full of Sharp Objects” and Nirvana‘s “Smells Like Teen Spirit”.

The entirety of the tour is based on them playing smaller venues that at this stage in their career would be very unlikely to be privy to. Majority of the venues they are playing have a capacity of less than 2000 people which at this point of their career just doesn’t happen. The show, no this tour, is something the band is definitely giving back to their fans. It is a much more memorable experience for the fans that are lucky enough to be able to get a ticket to. This is one tour that is not to be missed. The Used are revolutionizing what it means to have an intimate concert.

Setlist:
I’m a Fake
Take It Away
The Bird and the Worm
Listening
Empty with You
The Taste of Ink
All That I’ve Got
Buried Myself Alive
I Caught Fire
Blow Me
Lunacy Fringe
Pretty Handsome Awkward