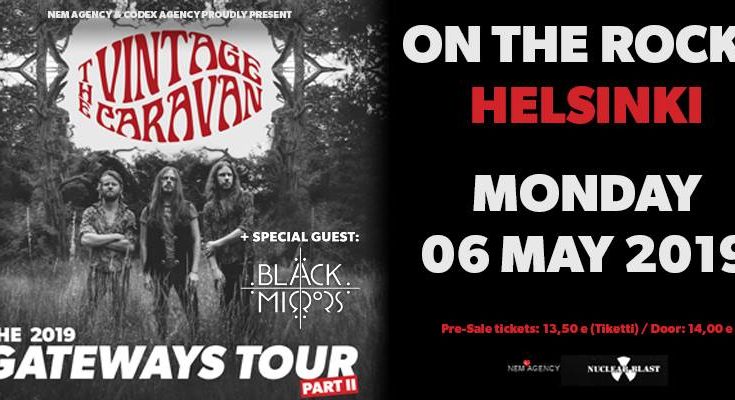 My home country Belgium is a small little thing, but has a surprisingly exciting music scene if you dare to look well enough. One of the bands that have appeared on people’s radars recently is the shamanic desert/stoner rock outfit Black Mirrors. With their debut full-length “Look Into The Black Mirror” they turned some heads (for the review go here) and I was excited to see them coming to Finland where I reside at the moment. That they were there as support for the Icelandic rockers of The Vintage Caravan was a lovely extra for me. So there I went, On The Rocks in Helsinki was the place and rocking out was my plan…

When Black Mirrors kicked off their show, they started to pull us in with an atmospheric intro that easily mesmerized many of us. That they often coin the term “shamanic rock” isn’t far-fetched when you see frontwoman Marcella Di Troia dressed with feathers and wearing lines of Native American warpaint on her face make almost ritualistic movements while setting the mood with the intro.

And as soon as that is over, they get into full gear rocking the roof off the place. Every single one of the band members throw themselves completely into the show and music, which works very infectiously to us as a crowd. I’m pretty sure that even if you didn’t know Black Mirrors but brought up the effort to get to the venue early enough to catch them, you’ll have gotten hooked by their energy and stage presence.

Marcella in particular is a very captivating element in the band’s live show. She nails every single note as it’s been recorded, seemingly effortlessly, combined with a very expressive performance. During several songs she’s telling a story with her whole body actually acting out elements of the lyrics she’s crooning in her microphone. And when the music takes over, she shows a healthy combination of staying on the background, giving the musicians next to her the center stage, and dancing passionately around like a shaman, reminding me of the crazy dances that Jim Morrison used to do during The Doors shows. It was the first time that this Belgian band played Finland, but if they continue the way they are, I’m pretty sure we’ll hear and see more of them all over the world in the near future!

To be honest, I wasn’t too familiar with The Vintage Caravan beforehand. I sort of knew what these Icelandic guys were all about and that I should like their music, I just never got to checking them out really. But after this show, rest assured that they’ll take up a permanent spot in my playlists! Without any remorse they shot groovy and catchy rock songs rooted in the seventies at the crowd gathered in front of them and kept the high energy up from start to finish!

Even the songs they said that were a bit “slower” kicked ass simply said. They rocked, they rolled, they shredded and did not leave much room to rest in their musically mind-blowing show. And the crowd went wild… Since it was the last show of a month-long tour, it seems they had decided to go out with one last huge bang and put down a Monday night party that a Friday night would be jealous of! And as often during the last show of a band’s tour, they dared to deviate a bit from their normal setlist.

First they played ‘Shaken Beliefs’ dedicating it to a Russian fan who had traveled 1000’s of kilometers to get to see his favorite band, a song they haven’t played in quite a long time or so they said. And after ending the show with their classic track Midnight Meditation, the crowd went so wild asking for more that they gave in with two more tracks under the form of the oldies ‘Craving’ and ‘M.A.R.S.W.A.T.T.’, dedicating the last to Black Mirrors and the whole crew they had been traveling around Europe with for a month. The perfect show to shake the “Monday blues” out of any person!