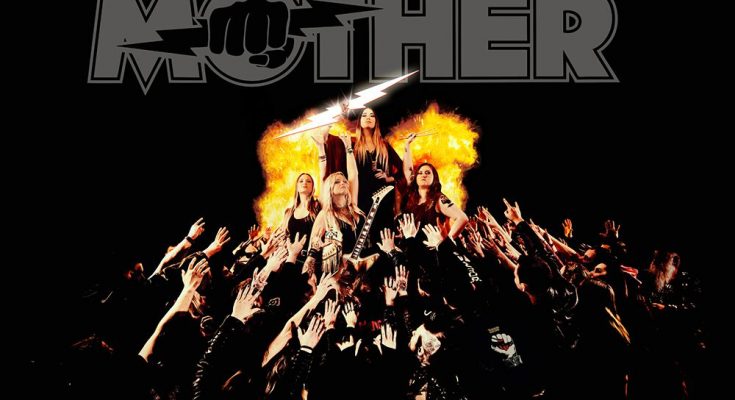 Thundermother is back with their fourth album ‘Heat Wave’. And man, what a blast! This one screams rock ‘n’ roll on all sides. It’s groovy, it’s fast. At the right moment a bit slower, … It touches every side of rock ‘n’ roll and lets you feel it.

Just before releasing their previous album ‘Thundermother’ in 2018, they had a complete change of band members. Only founder and guitarist Filippa Nässil remained from the original members. After releasing that album, they made room for another bass player: Majsan Lindberg. And now we’ve arrived at this blast of an album. Like the title song ‘Heat Wave’ says: “Heat Wave, here to stay”. I absolutely think that’s what this album is going to do.

The album starts of with a blast with ‘Loud and Alive’. The chorus, saying “Follow me”, drags you into the album. This one is followed up by a groovy one: ‘Dog from Hell’. “Love is a dog from hell”, a nice phrase for a complicated feeling. It can look sweet, but on the inside it can be a demon. Next up is a calmer one with a hard rock center. It goes by the name ‘Back in ’76‘. A song with a lot of personality. Even though there’s no video clip for this, you can just see it in front of you. Badass tough girls proving they can do anything, anywhere the way they want. Oh yeah, baby!

Done with the teasing part for now, ‘Into the Mud’ is fast. It grabs you and drags you wherever it wants to go. The lead guitar following the melody, a nice riff throughout the song, … Man, this makes you scream for more. Don’t forget the groovy bass solo in there as well. And if you thought that was all the soloing you would hear, it gets followed up by a short, killer guitar solo.

After that fast one, we’re getting into the pure rock ’n roll sounding title track ‘Heat Wave’. This song is the perfect title track, as it pretty much describes what the album is. The lyrics go:

“Heat Wave, here to stay, dehydrated all the way. I need another round.

Heat Wave, here to stay, fired up in every way. Somebody cool me down”

Thundermother goes all out on this album and only slows down for the next song ‘Sleep’, the power ballad on this album. ‘Driving in Style’ is the first single of this album and favorite song of drummer Emlee Johannson. It’s another fast one, but this one has punk elements to it. To quote Emlee: “A cool mix of heavy metal riffs with a chorus that sounds like a skate punk song”.

Next one ‘Free Yourself’ is Fillipa Nässil’s favorite. A calmer one with a nice and steady rock ‘n’ roll sound. To quote Fillipa: “An energetic song with a stunning AC/DC-like sound and a political message: Don’t let laws regulate you that way. rock ‘n’ roll needs space, we humans need space to develop”.

‘Mexico’ is your old school rock ‘n’ roll song. It sounds familiar, yet it’s new. A true classic. ‘Purple Sky’ sounds like it comes from a movie. You see the images pass by as you listen to it. A chill vibe song with a strong passion. Another classic one comes at you with ‘Ghost’. The name of the song always gets whispered, which gives it an extra vibe. Powered by classic rock guitars, this one is yet another strong one. Second to last song ‘Somebody Love Me’ starts with a deep breath before blasting out of your speakers again. “Come on and love me!” Don’t worry Thunder Mother, we will love you, this album is killer. You just proved it again with a super fast fiery guitar solo. With closer ‘Bad Habits’, Thunder Mother shows that they didn’t slow down for even a second on this album.

The album is powered by strong vocals throughout the whole album by Guernica Mancini. It matches perfectly with the vibe of the album and gives it that extra touch. This album touches every side of rock ’n’ roll. The fast stuff, the groovy stuff, the slow stuff, the mad stuff, … It’s all there and it keeps you hooked on it. This album is one for the replay button. Thundermother delivers top notch rock ‘n’ roll on this album with their own touch to it.

If you want to check out Thundermother, at the moment it seems like their Heat Wave Tour is still happening in September and October! They’re playing Trix in Antwerp on September 29th 2020.