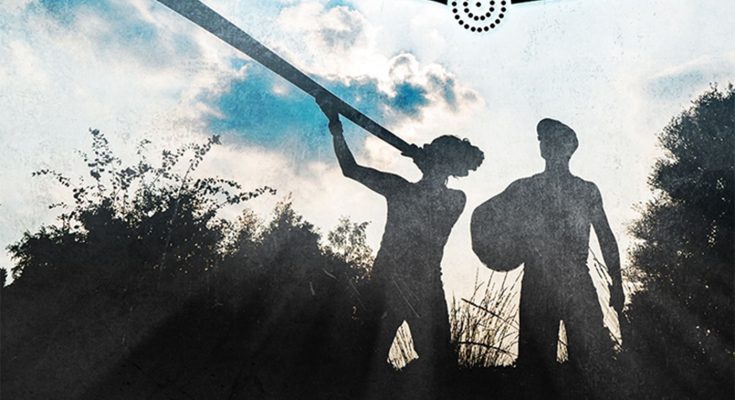 Ever since the multi-national pagan folk outfit Omnia introduced me to the world of paganism, I’ve been in love with bands and artists that try to give modern day pagans a soundtrack for their lives. There’s been a whole bunch of really cool bands and releases the past years bringing an often magical and entrancing musical journey with them. One of the latest creations in this world is a straight spin-off from Omnia: two of the present members of the outfit got together to make their own style of pagan inspired tunes. Didgeridoo player Daphyd and drummer Rob formed ThunderCrow, bringing a mix of pagan folk and electronic beats dubbing themselves the “drum ‘n’ didge duo” bringing their “hybrid world beats”. Their debut release Drop It dropped in my mailbox, so here we are…

With Tjukurpa they ease you in this rather special sound with mainly Daphyd showing off his didgeridoo skills, ending up a nice intro to the album. But the album properly kicks in with title track Drop It! again starting with some didgeridoo, soon accompanied by some tactful beats. Somehow Daphyd and Rob manage to create a true “club sound” with the heavy bassline driving the track. A well timed “Drop It!” every once in a while makes it sound as if we’re actually at an electro party.

That there’s a lot of diversity on this mostly instrumental album with just 2 main instruments is clear by the distinct jump in style with Ubuntu, going for a “happier” tropic vibe to the dreamy hypnotizing sound of Apus Apus. Grillos Mexicanos brings back the club beat to a damn infectious and dance-inducing track that’ll get you moving no matter what you try and UpBeat seems to be a song in which Rob gets to shine a bit more. The didgeridoo is still there, but feels this time more of the backdrop of Rob‘s great percussion work.

Parallel Universe is the longest song on the album and my personal favorite. To me it sounds like a mix of folky world music with a touch of Safri Duo at times and the composition flow of Juno Reactor. A track you can chill to but is at the same time a cool dance track! WaterIsLife is another track on which Rob‘s percussion work shines and plays the main role. A nice little touch is the intro with samples where you briefly hear a line from Omnia‘s Alive…

ThunderCrow has delivered quite the unique album with Drop It! To my feeling this might appeal to quite a wide range of people with all the different sounds and compositions gathered here. And to think that this has been created with just a didgeridoo, some percussion and a few electronic touches. Could be the perfect modern soundtrack for your ritualistic dances or just as a warm-up at home before you go partying!