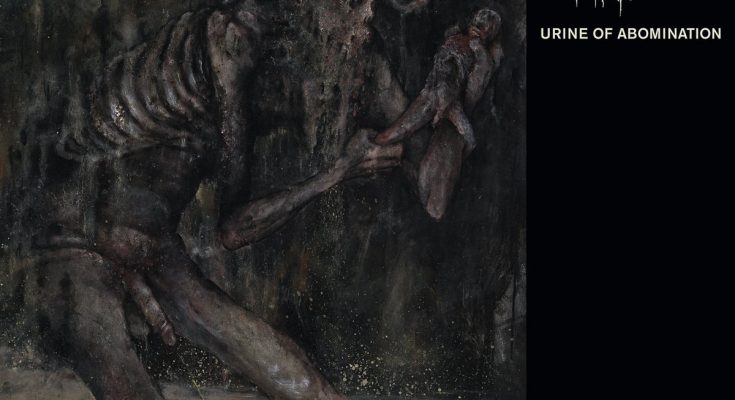 The latest E.P. from the U.S. death metal band Triumvir Foul ‘Urine of Abomination’ sees the continuity and the return of the duo members Cedentibus and Ad Infinitum of the U.S. black metal band Ash Borer. Triumvir Foul unfolds a new chapter which can best be described as filthy and bestial old school death metal. ‘Urine of Abomination’ is comprised of total four filthy tracks of utter abomination. While stylistically related to other acts such as Teitanblood and Autopsy, Triumvir Foul managed to create their own inharmonious niche.

Sustaining the trademark sound ‘Urine of Abomination’ is a very good follow-up to the band’s previous albums. Musically Triumvir Foul proceeds from where ‘Spiritual Bloodshed’ left off, the sheer barbarism and the erupting blast beats are evoked with the churning guitar riffs. After two years of silence the duo are back again however the new tracks on the E.P. shows a minor divergence in style. While it’s not a major shift in sound, the new tracks are dense and seemingly have a better sound quality than the sophomore.

The raw production and asphyxiating tone surround the tracks, ‘Urine of Abomination I’ begins with metallic ear piercing noise. So rough and disturbing then soon launches into an underground and brutal sounding death metal style of which the band has become accustomed to. You’ll hear some excellent tremolo installations followed by the crushing drums, harsh guitar riffs and chaotic solos. Triumvir Foul has always been an evil sounding band whose obscure tone is so dense.

The heavily distorted guitars sound disharmonic and there is plentiful of dissonance which conceal the atmosphere with total murkiness. This is a more one dimensional E.P. that brings similarities to acts such as Teitanblood, and Of Feather and Bone. The heavy death metal tone of the second track ‘Urine of Abomination II’ continues with the same aspect. With growls sounding brutal and bestial, musically the E.P. is well balanced there are many fast moments exceeding with blast beats. The old school vibe resonate with caustic and corrosive elements. The guitars are boosted with raw and sharp edged riffs and roaring growls, ‘Urine of Abomination III’ is displayed with the vileness of the evil guitar riffs. Churning up the atmosphere with chaos and the malevolence of the gut wrenching growls.

The sense of morbidity and the uncontrolled dementia is ejected right into your face, with drums being propelled frenetically the onslaught is hysterically discharged. Triumvir Foul is a band that scales brutality into chaotic order, the final track ‘Urine of Abomination IV’ is another repulsive and filthy track, there is absolutely no room for melodic bullshit here. The band is able to keep the same quality of the atmosphere flowing into a rancid foul of rotten death metal bestiality. Beside the wicked riffs on the ‘Urine of Abomination’ E.P. the drums and inhuman growls are overwhelming, and they effectively form a heavy and filthy death metal onslaught!