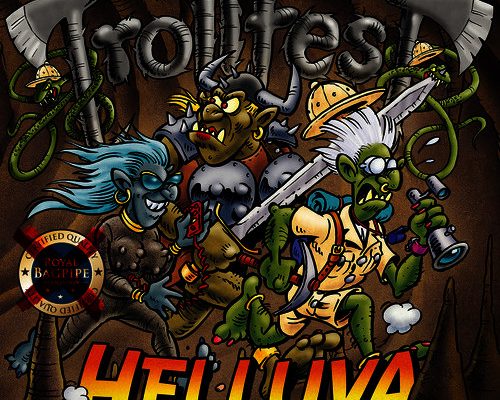 What the hell is this? I don’t know! Nobody knows! And that’s why it’s awesome! It’s pretty hard to categorise Trollfest, but according to the band itself they play ‘true Norwegian Balkan metal’. Unique in its kind, indeed, and ‘unique’ they are to say the least… Three years after Trollfest’s latest album Kaptain Kaos, my favourite Norwegian eccentrics are back with more uhm, I don’t know, more folk metal? ADHD metal? Helluva offers everything you’re used to hear from Trollfest. This time they bring us the story of the search for the giant cave troll Helluva. The storyline is at least as eventful as the songs to it…

Helluva kicks off with This is just the intro. The track is built up by a swinging melody that will make you long for the next song. You can already feel that the band will grant you no mercy with their tireless energy. You should definitely check out the video below and you’ll get what I mean when I say that they like to insert absurd humour into their songs. Then you’ll finally get to hear some lyrics on Professor Otto, or the language ‘Trollspråk’, as the gentlemen like to call it. This is a multilingual mix of Norwegian, German and English. You’ll get to hear many eastern elements in this song, the guitars and wind instruments are doing a great job here. During the bridge the vocals get childish/annoying. But hey, Trollfest gets away with that. On Spelunking Sisters on the other hand, the clean vocals are very well performed and remind me of Heidevolk.

Gigantic Cave is one of the most versatile songs on the album. Female vocals, a rumbling bass that gives you a true heavy metal feeling and a very catchy chorus make this an absolute highlight. It gets better and better towards the end. Heads will bang during live shows! And then we have Steel Sarah. Thanks to a great videoclip I didn’t really pay attention to the music the first time I checked it out. This a nice straightforward track with some fucked up beats and hypnotising saxophones. Another ‘striking’ song (to Trollfest standards of course) is Hen of Hades. Singer Trollmannen is a brilliant chicken imitator. This guy’s talents know no limits.

Reiten mit ein Fisch is not only a very poetic song title, it’s also a great swinging, bigband-ish song. Kabaret and Don Gnomo Vega have a similar feel to them. Trollfest definitely knows how to swing! Next up is Fräulein  Helluva. This is a typical Trollfest song that’ll undoubtedly be a crowd pleaser. The ska-like trumpets and singalongable chorus combined with firm drums and guitars make this one of the strongest songs on Helluva. Finally, the album closes with Sputnik. It sounds like a very drunk Russian party. So wrong, but so good.

And that will be my conclusion for the entire album. The concept, the lyrics, everything is so damn wrong but it sounds so right. That’s why Helluva is a great album. These guys know how to be original and how to make interesting music. It’s definitely one of the most energetic bands I’ve ever heard. They know very well what they’re doing and they’re skilled musicians. In terms of the music, Helluva is not much different from the former albums. That’s the only point of criticism I have. It’s nothing new, but so far that’s not necessary. If they would get tired of their musical carreer, I bet that they could be great comedians as well. Let’s hope that Trollfest keeps on producing qualitative albums like Helluva. If you’ve never heard of them, you really should have a listen. It’s impossible to remain indifferent about these guys. Many ‘what-the-f*cks’ and a serious party mood will follow! You’re welcome!