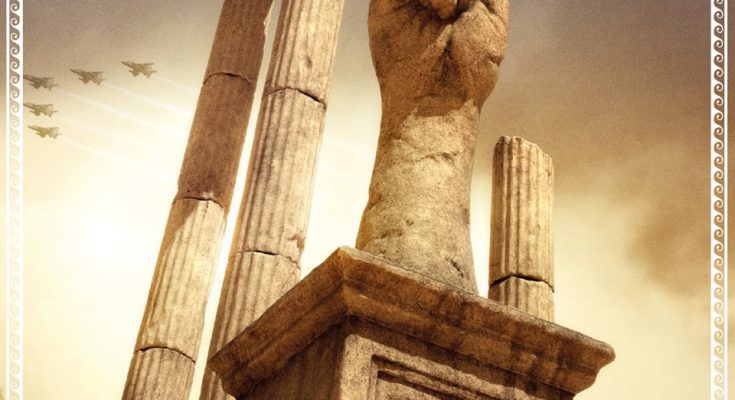 Truckfighters have been around for fifteen years now. Over 700 shows and 7 albums, they had it busy. For their latest album called V, their own label Fuzzorama Records, collaborated with Century Media Records. The album was released on September 30th, 2016. For their fifteenth anniversary they have also created a new website. There you can sign up and mark the shows you’ve been to.

To celebrate the band’s 15th anniversary and nearly 700 shows around the world, we’ve created a new website which allows fans to mark a TRUCKFIGHTERS show they have attended in the past. All gig dates and the names of the fans who sign in and mark their show will be printed in the special edition of the album. To join in and find more info please head over to http://truckfighters.centurymedia.com/.

When I first listened to their newest album I wasn’t immediately convinced. I couldn’t find a structure in their songs and it sometimes felt a bit chaotic. Now, you can’t judge an album after only listening to it once. I decided to play it again when I was at home. Armed with better headphones I gave it another try. And I can assure you, I was wrong. What first sounded like a chaotic mess (through my cheap headphones) now suddenly sounded like a beautiful composition of sounds. The puzzle pieces fell into place and once the puzzle was finished it was a very well layered piece of musical work.

Truckfighters start off their new album with Calm Before The Storm. A prelude to the storm that is the album. It starts off slowly with a soft, warm tune accompanied by ethereal vocals. As the song progresses, the other instruments drop in. From there it builds up until halfway the song the tone shifts. The fuzz riffs take over from here. Which also returns towards the end of the song. They are heavily on the foreground of the track however. Masking a bit of the drums and vocals at moments. It’s definitely a good song to start the album with. The song comes even more to its right through the music video (see above). But it did create some controversy. The song and thus the video go about the murder of seventeen year old Lisa Holm. A Swedish teenager that was murdered in the summer of 2015. The incident had shaken the Swedish nation up and the band members of Truckfighters as well. Truckfighters released a statement on their website in Swedish. They clarified that they didn’t write this song with any other intention as their other songs. It should also be noted that all the proceeds of the single will be donated to the Lisa Holm Memorial Fund.

The album takes off quickly after the first song. Their third track The 1 busts through your door like a battering ram. With an explosive riff they drag you along this song. From there it is an up and down between pacing. With very abrupt changes between them. It kind off felt as if the track was separated in two, during the first half of the song. It makes it a bit hard to follow. Especially when you’re just doing something else and it’s playing on the background. However, halfway the song the two ends meet and they make a whole again. With a very catchy riff that blends perfectly with the vocals.

The seven track album comes to a close with Storyline. With a slow heavy riff they lead us into this song. Suddenly the setting changes completely when nothing but an acoustic guitar, some soft drums and the vocals remain. And this is where the vocals of Ozo truly shine. Which leads to my main remark about this album. The guitar and bass work are very well composed but do tend to overshadow the drums and vocals. Not easily distinguishable let us say. It isn’t something present in the entire album of course but at times it is noticeable. Storyline keeps it plain and simple. Not overly complicated riffs, like a fast river dragging you along. The acoustic parts are a pleasant change from things and offer a beautiful ending to a strong album.

It is clear that Truckfighters have their fair share of experience under the belt. And it’s very nice to see that even after fifteen years they can release an album with a very unique sound to it. Yet it is still unmistakably a Truckfighters sound. It took me some time to get used to the album and yes, there’s parts I like less than others. But I can conclude that it’s a very pleasant album to listen to. With a good amount of variation, even within a single song, it doesn’t get boring. And despite that variation their riffs easily get stuck in your head. You’ll find yourself humming along in no time. Once you hit play you’ll be in a dreamy daze and before you know it, the seven tracks are done. I’d say: “to another great riff filled fifteen years!”

Info about their tour can be found here.