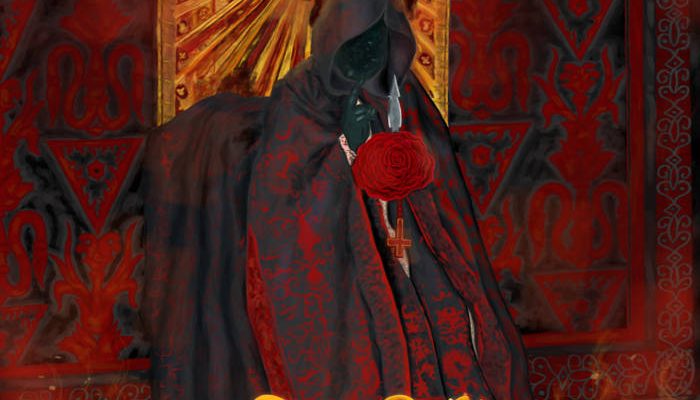 Rock music can be molded into many different genres if combined with creativity and originality. There are a few bands who think out of the box and intend to provide freshness and new patterns to form an exquisite piece of music. Reminiscent to the 60’s and 70’s occult rock style U.S. , San Antonio, ensemble TrveKvlt shows an impressive and unique take on this sub-genre of rock/metal music and integrates them with black metal. This kind of skeptical fashion has been obsessed by the classic horror movies about satanic cults and mysterious profound subjects. Post Millennium bands such as Coven, Blood Ceremony and Orchid interweave the elements of psychedelic rock, acid rock and blues into their musical style. Their musical platform is extracted from the basic and the fundamental roots re-representing them by an effective dose of gloomy music.

TrveKvlt somehow differs from these bands, as they intended to follow a new and un-explored method. Their debut album Black Mass is overwhelmingly soaked into sepulchral vibes of darkness. The album broods over the dusky and a palpable feel of occultism and horror, and builds upon the spooky vibes of the funereal church organ. TrveKvlt molds the basic style of occult rock and metal and genuinely combines these two style into some kind of horror themes that sprawls on the first wave of 80’s black metal. And by such unexplored medium the band has exposed the missing link between occult rock and black metal. Therefore you will come to experience some bizarre sensations which mostly surrounds all the 11 tracks on this album which clocks at 34.46 minutes. Musically the band delves into the embryonic style of metal music, this mysterious and unified ensemble have emerged from the cold catacombs of a hunted church.

To grant us with their most chilling and ghostly vibes which can be defined as eerie type of metal. At many times TrveKvlt portrays the gloomy vibes of black metal music, the lo-fi production of the album provides that archaic feel to the music. Opening intro Ordo Ab Chao and the following track Death Dealer shows the uncanny approach to their old fashioned music. Harsh vocals and chock-full of heavy riffs, the atmosphere is mostly enthralled by the church organs which plays an elemental part in forming the themes.

This instrument is the most inspiring component of the music as it adds a thematic ambience to the rest of the tracks on the album. TrveKvlt plays a rudimentary kind of metal music but simultaneously proves that gimmicks and ingenuity can also be achieved even by anonymous musicians. The debut album encircles around ominous tracks like Hell on Earth, and The Mark. These two tracks encompasses the swirly guitar riffs that issue some groovy vibes which contrast with the omnipresent organ. TrveKvlt explores various styles, the second half of the album plunges deep into the more varieties setting some ceremonial and enchanting sounds.

The lush tones on Strike Them with Fear encounters the airy vibes of the organ and gives it that medieval feel. While Command Thee explores the tonality of 60’s rock bands a la The Doors and has a fluent use of the church organ. The intrinsic role of the fuzzy guitars are surprisingly catchy. Black Mass blooms into inventive style and blends the first wave of black metal where the band sprinkle those melodies and eeriness by providing different musical features.

The archaic references to bands such as Beherit and Bathory emphasizes on dark atmosphere and fuzzy distorted guitars and the vocals which have this ghoulish appeal. Simultaneously I found tracks like Infernal Rite of Passage is their most chilling track on this album. Beside the dramatic and cold instrumental piece Devil’s Reign, TrvueKvlt wraps the album with Satanize and the closing track Apocalypse which is beautifully built on meditative spooky symphonies. This is a pleasant achievement by the San Antonio quintet band who have debuted their album very recently.