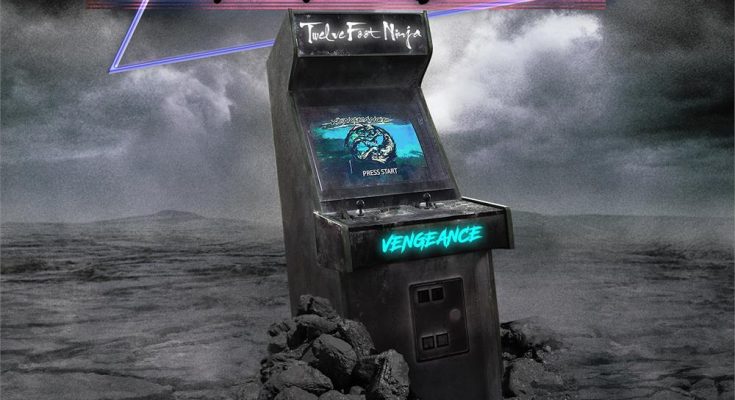 The Aussies of TWELVE FOOT NINJA are known for the fusion of metal, nu metal, rock, pop, jazz, hell yeah even bossa nova they are bringing to the world that are the soundtrack to their short film a-like videos full of bizarre twisted crazy plots. On Friday October 15th, Twelve Foot Ninja released their new album “Vengeance”.

This album is a part of Project Vengeance, a project that consists of a graphic novel, the new album and a high fantasy novel, “The Wyvern And The Wolf” written by Nicholas Snelling. It is telling the tale of an orphaned samurai boy called Kiyoshi who is adopted by the ruthless leader of a clan of ninja. Much more than a mere origin’s story, however, the novel is a tour de force in fantasy fiction and world-building, and represents a unique partnership with Snelling. The original story of the Twelve Foot Ninja was conceived by the band’s guitarist/producer Stevic MacKay and his partner Fiona Permezel. Next to that is a graphic novel called “Vengeance” available, written by Stevic with artwork by George Evangelista. The graphic novel sees the band’s namesake, the Twelve Foot Ninja, journey through alternate dimensions to take on an evil alien entity. Here we are focusing on the actual music this project has to offer.

Opening track Start The Fire punches hard with a riff that is so typical for Twelve Foot Ninja. The catchy refrain, sung by Kin Etik, (fun fact : he’s doing plenty of voice overs for commercial ads for companies like Kellogg, etc) by far one of the most underrated vocalists in the scene today, will get lodged in your brain with no trouble at all. His unmistakable tones stand out as one of the highlights on Vengeance, and he has improved greatly with each album. The song ends with a Periphery inspired piece that grooves like hell.

Long Way Home opens up with a horror inspired sound, reminds me even a bit of Annihilator intros. They use a lot of 80’s era electronics on this album, it suits their music quite well. Check also out the funny video that comes along with this song. Vengeance and IDK have somewhat the same Atari sounding intro with the difference that IDK has a softer verse but in a whole is more swinging song with a lot of nice underlying effects. Vengeance on the other hand is missing the Twelve Foot Ninja extra flavour. Shock To The System is giving us back what we know Twelve Foot Ninja has to offer. Better choruses, think about JAMIROQUAI, electronic Daft Punk inspired sounds and a nice bossa nova/ big band influenced mid piece. We can expect a nice funny video of this song I’m guessing.

Culture War is the highlight on this album. A full of Jinjer inspired guitar riffage, a song that’s full of adrenaline. It just has another feel in contrary to the other songs and brings some needed life in the album. With the mariachi breakdown this song just has it all. Speaking of Jinjer, with Over And Out the band pairs with JINJER vocalist Tatiana Schmayluk, and her and Etik‘s voices match up perfectly. It’s a great song with nice vocals sung by Tatiana and Etik. It also shows what a beautiful clean voice Tatiana has. The album ends with Tangled, a ballad-like song.

Vengeance is a very nice album that is missing here and there some sparks, some climaxes. Twelve Foot Ninja have the musical capabilities to do anything they want, maybe they played it a bit too safe on this album. What this album misses is quality songs like One Hand Killing and Coming For You. The fans won’t be disappointed, it still has more pros to offers than cons and I have to say, after a couple of spins the album grows more and more on you.