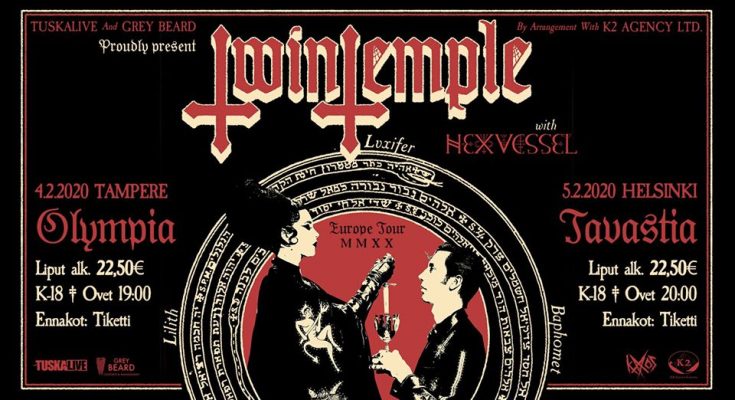 Hexvessel is coming back to town! Somehow I haven’t been able to catch this amazing band live despite them playing shows in Helsinki quite often. So I had to grab this opportunity with both hands and feet. When checking out what the headlining act Twin Temple is all about, I got even more excited about this gig. Satanic doo-wop from the States that sounds as if the roaring fifties are back in full force, just with a thick sauce of occult and our lord the savior, Lucifer. What could go wrong?

First up to set the mood, was of course Hexvessel. This Finnish band has been making very unique music ever since they started and are continuing to do so, winning new souls at every turn. I personally discovered them properly through last year’s very lighthearted ‘All Tree‘, which I described in a review sounding as if a bard from Medieval times spent some time with the elves and fairies from the forests that were thick in both greenery and magic. They are going to release a new album already this year and it seems for that one they’ve gone back to their more bluesy sound of before. But overall, Hexvessel stands for very mesmerizing and atmospheric kind of music that, if you allow it, will take you on a trip far away from this earthly plane and lift your spirits. And that’s exactly what their show at Tavastia did to me this night. Main man Matt and his musical friends played their musical creations with a clear passion, sending out a positive and magical vibe that made me close my eyes on regular occasions, letting the music gently swallow me up and make me feel like floating through the air. Hexvessel, I’ll see you again soon for sure!

And if I thought the night couldn’t get any better after Hexvessel, I was about to be proven wrong. The LA-based Twin Temple stands for Satanic Doo-wop, which sounded like real fun when I checked them out at home. I was wondering though if the whole thing was going to come across rather gimmicky. Nothing of the sort. When the lights dimmed and only a deep red light was shining on the altar set up in the back, the supporting band members got on stage, engaging into an instrumental tune that was simply electrifying already. You could feel the anticipation in the room rise and when the Satanic duo of Alexandra and Zachary James strode on stage, the crowd greeted them loudly. They went to the altar, performed some ritualistic signs and seemed to bless the gathered followers with their ceremonial swords. After which Alexandra disclaimed lines from the Satanic bible she was holding, supported by Zachary ringing a bell and making the crowd shout out different names for Satan (which wouldn’t be the last time for sure).

And then they kicked off with their music! It’s swinging, catchy, cheeky,… just simply fun with a dark twist. And the crowd ate it up like it was sweet candy, often singing along with the lyrics of songs like ‘The Devil (Didn’t Make Me Do It)’, ‘Satan’s a Woman’ and ‘I am a Witch’. Alexandra pulled most of the attention to her, waving her cape around and calling out for Satan, the emancipation of women and against the patriarchy more than once, every time greeted with loud shouts of approval. Zachary mostly stood solid as a slender rock, cranking out those typical old school rock’n’roll guitar sounds and the band each added their own character to the show. There was the stoic organ/keyboard player constantly looking down on his keys, the saxophonist who came to play some groovy solos at the front of the stage from time to time, the bassist who was rocking out in the background and the drummer who was probably the most active and expressive person on stage besides Alexandra.

She sought connection with her followers, they blessed a lovely couple on stage freeing them from their shackles and blindfold in the name of Satan, giggled, laughed and crooned around with a big smile, finishing in her drinking blood from the sacrificial cup and spitting it out over… well… me. The show ended with the same bouncy and electrifying instrumental tune while both Alexandra and Zachary offered those who wanted it, to be anointed by them with a line of blood on the forehead. With that they sent us off in the cold darkness, absolutely feeling blessed that we got to enjoy this little ritual.